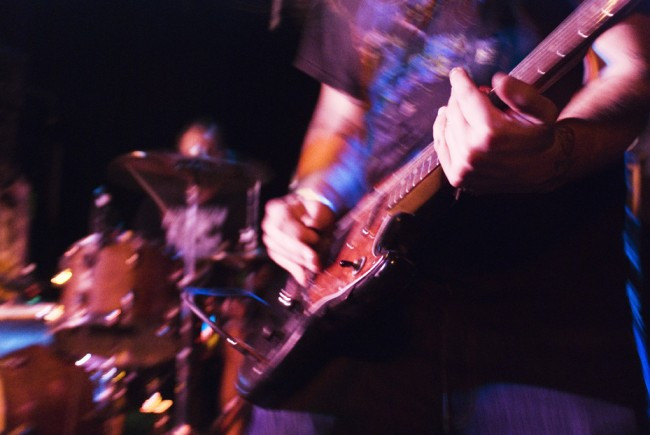 (BadWolf and friends took in the show at Detroit’s Magic Stick co-headlined by Corrosion of Conformity and Skeletonwitch on November 16 and provides this review, with pics by Nick Vechery.)

I go to so many concerts that I forget live music is a celebration. When a band plays, the audience takes on a responsibility to express great feeling—vocally, physically, and of course through liver deterioration. It is easier to have a good time at a show not only when the bands are good, but when there is an occasion to celebrate. In the case of Corrosion of Conformity and Skeletonwitch’s co-headlining show, my wolf pack and I had much to celebrate.

My longstanding photographer and concert partner, Sir Nick Vechery, just celebrated his one year anniversary with his wonderful Significant Other, Whitney. [HAPPY ANNIVERSARY, GUYS!] Her gift to him? Skeletonwitch tickets. At the same time, we celebrated our first year of reporting for No Clean Singing. We loaded my car up with some Pabst and Toledo arts reporter Ian Hubbard, and trekked to The Magic Stick.

The Magic Stick boasts a fine bar, plenty of room, a loud stereo, and a huge second-story smoking patio with a gorgeous view of metro Detroit. The venue sits on top of a bowling alley, another bar, and a snack shoppe (the pizza was quite delicious, if a bit greasy). It stands as one of the finest venues I’ve ever visited, and I highly recommend that any NCS readers with the opportunity to spend money there do so. In the past two months I’ve seen four concerts there and cannot wait to return.

The show turned out to be a miniature festival of sorts. Skeletonwitch’s US Abomination tour shared the evening with sludge-punk legends Corrosion of Conformity, and heirs to their throne Red Fang and Black Tusk.

Unfortunately Mutilation Rites had already finished their set before we arrived. I’ve seen them once before this year in Detroit before their Empyrean album dropped. That record blends crust punk with black metal into a sound reminiscent of early Emperor. It’s one of the best black metal records of 2012, and just barely missed my end-of-the-year list.

Havok played an energetic burst of old-style thrash metal. Along with Skeletonwitch and Vektor, they compose the only three ‘re-thrash’ bands I can listen to recreationally. They played choice cuts from their 2011 album Time Is Up and their 2012 Point of No Return EP—both excellent. Havok has enjoyed a steady lineup since 2004, and it shows—they played their songs with pinpoint accuracy. My standing ovation goes to bassist Jesse De Los Santos, who strums faster with his thumb than many other bassists do with a pick, and wrings a thicker percussive tone out of his instrument. He is the band’s secret weapon.

Black Tusk played virtually the same set Nick and I witnessed at Suckfest, albeit on a smaller stage. For a three piece, they know how to make a lot of noise. Andrew Fidler and Jon Athon (guitar and bass) share a fraternal interplay that gives their sets a jovial feel. They often play to one another in the middle of songs, rather than to the crowd. 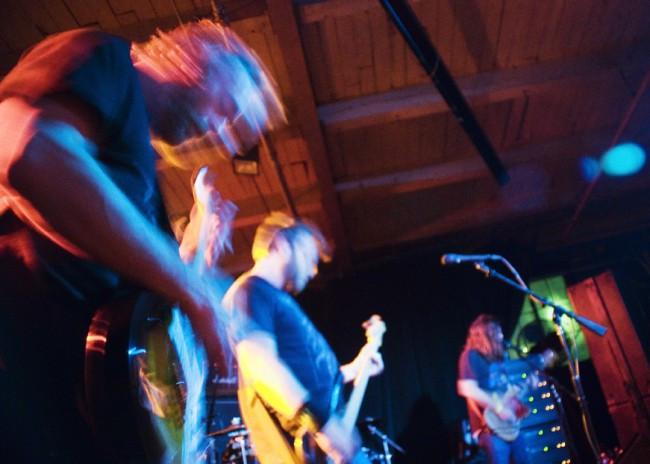 Next came the set Nick and Ian were most excited for. Nick took as many pictures of Red Fang as he did of every other band combined. Red Fang, with their quirky mix of clean vocals and grungier distortion, looked like the odd-band-out on paper. The Portland troupe, masters of hilarious music videos and big rock riffs, make some of the most pop-oriented stoner metal I can think of (Torche is the other good example). Imagine my surprise when their snare drum sounds like a magnum revolver firing. Red Fang play loud.

When I first saw Red Fang open for Mastodon, their set dwelled heavily on Murder the Mountains, and only included “Prehistoric Dog” from their debut collection. This set, all forty-five glorious minutes of it, drew from both releases, but they did not play “Prehistoric Dog.” The crowd clamored over and over again for “Wires.” When they finally played it, as the set closer, the crowd seemed to levitate. 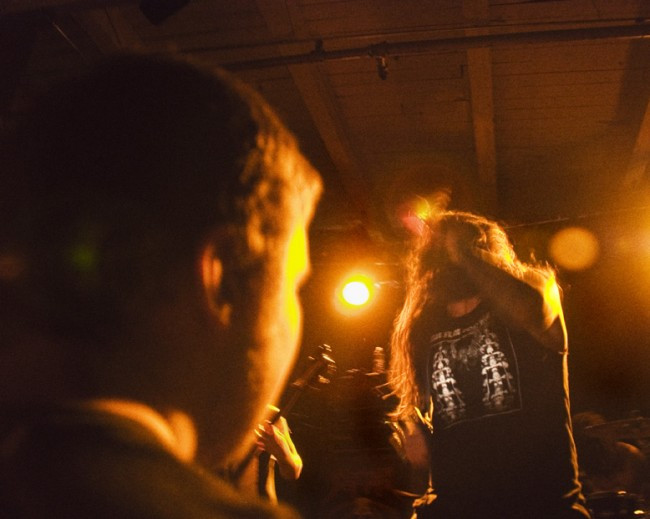 Skeletonwitch launched into their set, wasted no time, and absolutely nailed their set. At this point I have seen Skeletonwitch five times in three years, and every time I am amazed by how excellent they are live. I know their songs by heart, and they do not make mistakes. Every tour they change their setlist up (I wonder when they’ll bring “Fire from the Sky” back into play?).  Chance Garnett is the perfect frontman—his lows rumble, his highs shriek, he interacts with band and crowd alike. 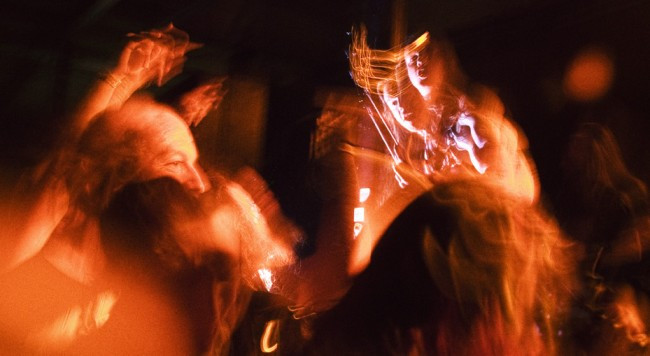 An anecdote to illustrate the power of the ‘Witch: Ian is a true old school headbanger. He indulges only in antiquted and straightforward thrash, grind, crust and hardcore. His immediate raction to all metal younger than himself is skepticism. Get the picture? Two songs into Skeletonwithch’s set, he dropped into his three-point stance and headbanged enough to herniate a cervical disc. The pit responded in kind—rowdy, but fun, without any overt pit-jockeying, but replete with circle pits.

The key to Skeletonwitch as a band is they do not play the heavy game with themselves or other bands. Every song from every album is played in standard tuning through tube amps. Free from the constraints of trying to be more bass-heavy and rhythmic than their peers, Skeletonwitch focus on hooks and ferocity—the catchiest bits of every fast subgenre of metal from NWOBHM to black metal, played with distinct conviction. The Garnett brothers and company are one classic album away from being legends in their own time. 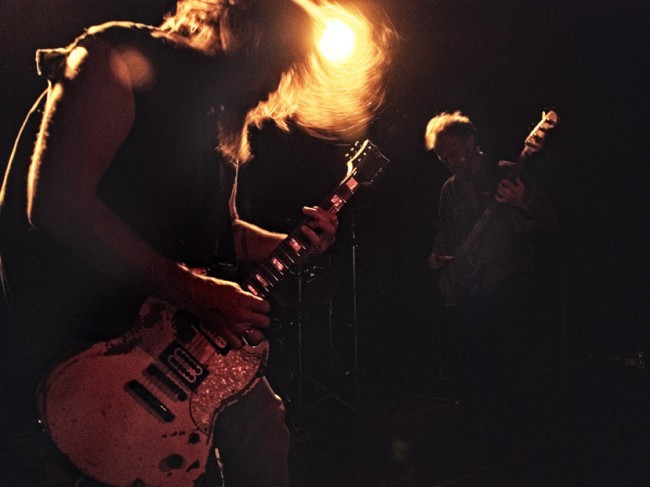 But of course, legends fade. It pains me to type this, but Corrosion of Conformity played a bad show. Their material—new songs from their recent free EP and classic tracks alike—sounded uniform and sloppy. I’m a fan of both their 80’s punk-oriented material and their groove catalog with Pepper Keenan, who is now focusing on sludge metal supergroup Down; after the set I can safely say I won’t be seeing the band again unless they bring Keenan back into the fold.