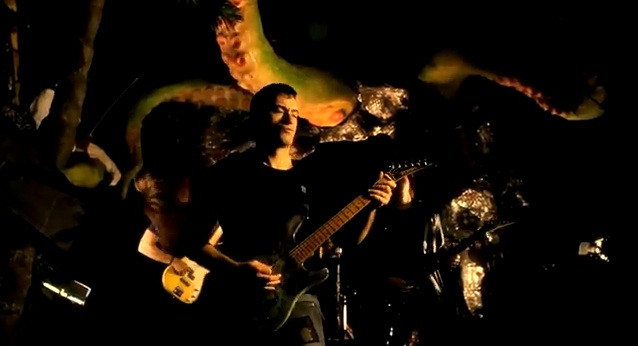 Not only did Scion A/V finance the production and free distribution of the killer new Arsis EP, Lepers Caress (reviewed here), they’ve also financed production of a video for one of the new songs, “Carve My Cross”, and you can now witness the results.

The song really sells itself. It’s a head-spinning onslaught of tech-death fire and brimstone, with guitar acrobatics and drum pyrotechnics that will make your eyes bug out. James Malone is also in fine voice, which is to say his vocals are capable of stripping paint from the walls.

As the video shows, Mr. Malone has shorn his flowing black locks. Unlike Samson, the loss of hair has not sapped his strength, as a guitarist or as a vocalist.

Apart from revealing the new Malone look, the haunted-house video (directed by David Brodsky) is nicely done and fun to watch (it includes tentacles as well as acting performances by the band) . . . but the song remains the true star. Watch it after the jump.