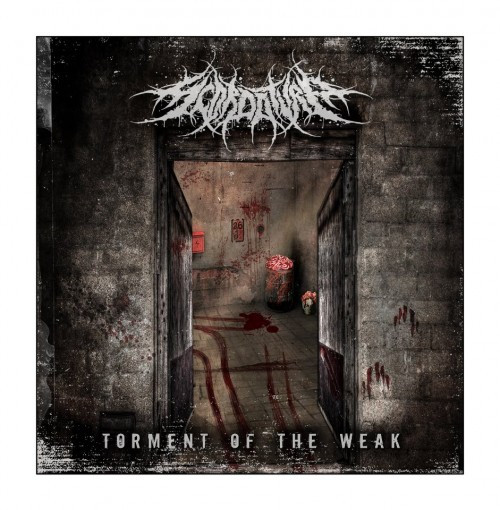 The world turns, time marches on, and good things from the past rise again.

Scordatura are a five-piece death metal band from Glasgow, Scotland, who we first wrote about early last year in a piece on Scottish metal. They’ve now finished recording their debut album, Torment of the Weak, which is set for on-line release on February 1, 2013, and today we’re pleased to give you an exclusive premiere of the album’s third track, “Neurotic Aberration”.

If you let your mind turn to the idea of a blender filled with scoops of Hate Eternal, Suffocation, Dying Fetus, and Origin, set to puree, then you’ll have an advance idea of “Neurotic Aberration”. Though it may be your brain that gets pureed.

Scordatura twist and turn and slice and dice in a whipping fury of technically oriented brutality. And by “technically oriented”, I don’t mean a flurry of prog-minded note-wanking. I mean the whirring teeth of a meat grinder turning slabs of beef into finely carved tartar. It’s raw, red, and delicious.

Torment of the Weak was mixed by Scott Fuller of Abysmal Dawn and mastered by Fuller and Max Karon. The track list is as follows:

The album art is by Dave Coia (Vile Logos & Design), and the album includes guest vocals by Enrico H Di Lorenzo (Hideous Divinity). It’s currently available to pre-order on the band’s merch store, along with some new shirt designs. Here are relevant links: