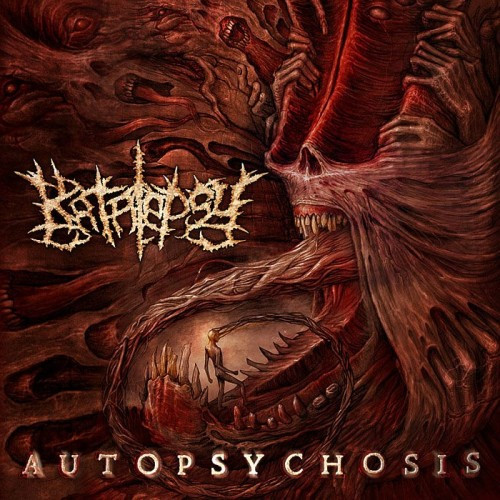 (In this post, TheMadIsraeli reviews the new album by Russia’s Katalepsy, which is being released today by Unique Leader Records.)

I immensely liked the advance song from Autopsychosis that this band debuted in November (“Evidence of Near Death (E.N.D.)”), which we shared with you all previously, and I was rather intrigued as well. It was excellent slam with brutal girth that crushed bodies and turned them into toothpaste tubes being run under a tank tread.  However, the fact that the single was an excellent song of stalwart brutal death doesn’t mean the whole album is simply a high quality salute to the tried and true.

It turns out that on Autospsychosis Katalepsy prove to be quite an interesting band, whether through their downright whacky and unorthodox ideas such as the harmonic scrapes in the verse riff of the opener “Lurking in the Depth” that give it an odd, yet appealing taste, or just some of the strange riffs these guys whip out even in a death metal setting. There are clean sections, straight-up melodic sections that can be downright neo-classical in nature, and more.

This is a band taking the slam sound of recent years and expanding it into rather eclectic territory at the same time.  I quite dig on it, although I foresee this not being everyone’s cup of tea.  The production is rather boomy and sewer-like, with a lot of reverb and low-end sludge that, once again, not everyone may exactly fawn over.

However, I think Katalepsy are a band worth watching. I’m finding their brand of disgusting, grinding filth to be impossible to turn away from. Considering that before writing this I spun the album five times in a row, I think that speaks to my take on it. I I implore people who like brutal, nasty shit to check out this album.    Good stuff.