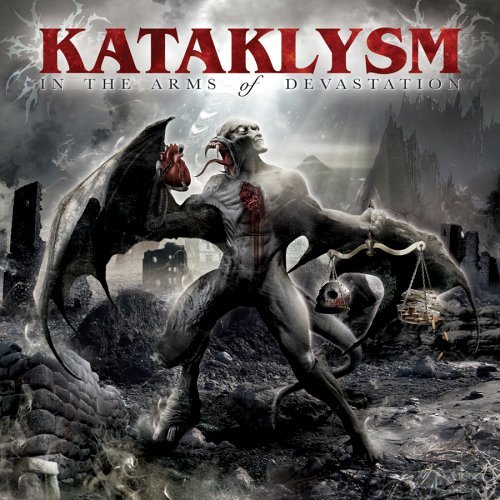 If I were to tell NCS readers which Kataklysm albums I consider essential listening, I’d name Temple Of Knowledge, Victims Of A Fallen World, and this one. In The Arms of Devastation (2006) is quite possibly the best album modern Kataklysm has produced. By retaining the core of the new sound while introducing new influences, this album is infectious, brutal, and full of rage.

It also benefits from the fact that it’s the first album since Temple Of Knowledge that contains the diversity that album did, mostly assisted by the fact the band takes influences from all over the map. You’ll hear the typical Grave influence that has stayed with this band (especially in the guitar tone on this particular album), but the music also reflects the sounds and styles of Vader, Hypocrisy, and Amon Amarth, among other bands.

This album also includes a lot of the best songs of this era of Kataklysm. “Like Angels Weeping the Dark”, “Crippled And Broken”, and “The Road To Devastation” are good examples.

What really makes this album stand out, though, is that Kataklysm’s absolutely supreme confidence comes through. The music on “In the Arms of Devastation” is played with such conviction and the band feels so into it that you can’t help but be pulled in, which I suppose brings me back to why this band didn’t hook me too much after Temple Of Knowledge: They didn’t have assurance in this new direction. They definitely got footing with Serenity in Fire, but this album is Kataklysm on a roll.

The next part of this reconsideration is going to be interesting for me because I’ve never seriously listened to the band’s (up to this point) latest two albums. After I hit those, I will do a wrap-up article where I consider this band as a whole, listing their albums in the categories of excellent, good, or bad (or some variant of those) and attempting to reach an overall conclusion about their music as a whole.

Until then, enjoy the devastation.

5 Responses to “KATAKLYSM: “IN THE ARMS OF DEVASTATION””