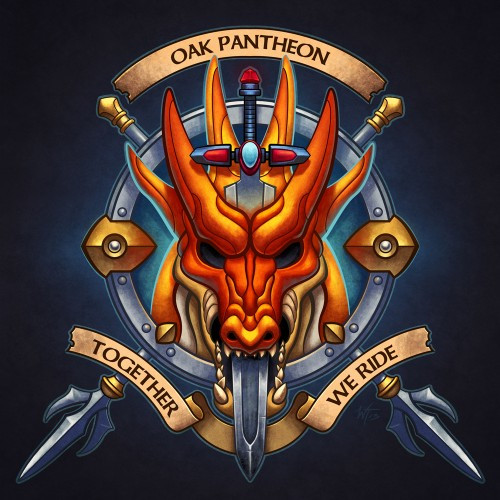 Holy hell, get a load of that badass artwork, would you? It’s by Wes Talbott and it accompanies a brand new free single from Minnesota-based Oak Pantheon that just premiered: “Together We Ride”.

Now, if you know the music of Oak Pantheon — and you damned well should — this track will throw you for a loop. It’s a medley of instrumental music that originally appeared in various installments of the Fire Emblem video game series and it was apparently also the series theme in Super Smash Bros. Melee. Not being a gamer, I had to look this up . . . and needless to say, I’d never heard the music before. I just took the Oak Pantheon version as it came.

As the name implies, it’s one hell of a galloping, trampling, epic romp. Yeah, all the cheese will immediately raise your cholesterol level, but I’m going back for seconds and thirds, mainly because I’m hooked on the guitar lead in this baby. And the galloping. I like the galloping, because music like this is as close as I’ll ever get to being on a charging horse with a pennant in one hand, a sword in the other, and the reins between my fuckin’ teeth.

Go HERE to download “Together We Ride” — and give it a listen below:

5 Responses to “OAK PANTHEON: “TOGETHER WE RIDE””