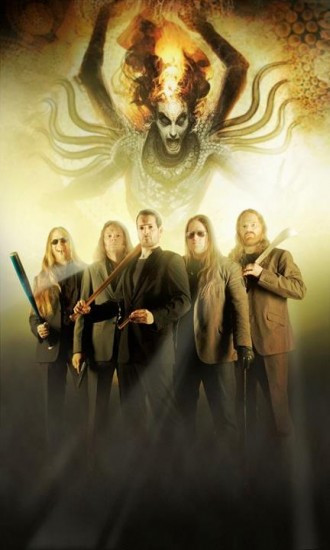 One of our number has heard The Monolith Deathcult’s new album, Tetragrammaton. Not wanting to say too much at this early stage of the ramp-up to its release, we present only this brief diagnostic analysis:

As food for the brain, The Monolith Deathcult’s new album Tetragrammaton is a well-balanced diet.

Most immediately noticeable, it includes a super-sized helping of nutrition for the cerebellum and the brain stem, those parts of the organ responsible for motor control and involuntary physical activity such as headbanging and fist-pumping. It’s loaded with industrial strength pneumatic grooves. It also includes breakdowns. We think they threw in the kitchen sink, too.

Tetragrammaton also feeds the deep limbic system, which plays a vital role in setting a person’s emotional state. The album contains moments of high drama and even darkness. It also provokes impulses of aggression, as in the desire to tear shit up. And it also tickles the funny bone.  That’s in the brain, isn’t it?  Two words: Optimus Prime.

And of course, this being The Monolith Deathcult, the album also enriches the parts of the cerebral cortex responsible for learning and serious thought, with songs based on subjects such as The Red Army Faction, the legend of Icarus, an Iraqi palace of torture under the regime of Saddam, Hutu extremists in Rwanda, human slaughter in the Iran-Iraq war, and . . . most compelling of all . . . the legend of the Transformers.

Of course, we don’t mean to imply that Tetragrammaton is necessarily healthy for your head, because it’s also saturated with venom and may cause severe concussion. You have between now and mid-May to prepare yourself, because that’s when Season of Mist will release this assault on the pillars of civilization. After that it will be too late.

Tetragrammaton will be released on May 10 (May 14 in North America, because our civilizations are pretty flimsy already).

10 Responses to “THE MONOLITH DEATHCULT: A “TETRAGRAMMATON” PREVIEW”