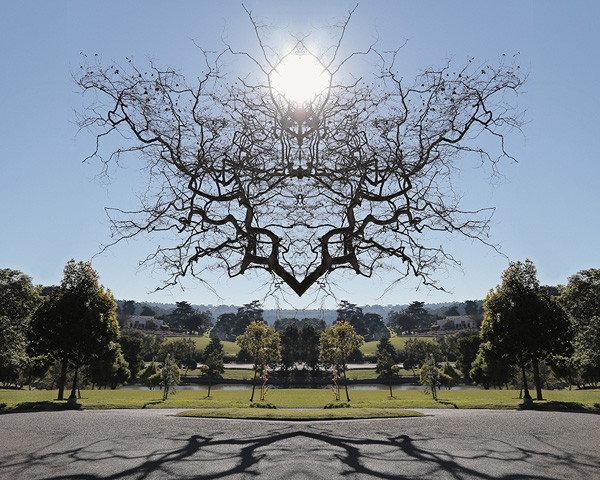 Good morning, good afternoon, good evening. It’s time for another edition of THAT’S METAL!, in which I collect photos, videos, and sometimes news items that I think are metal, even though they’re not music.

Today, our collection includes mirrored, floating trees; art that’s meant to disappear with the waves; spiders in the sky; a Kraken on camera; reflections that turn nothing into something; possibly the best condom ad ever created; “My Vag” (well, not mine); and a movie trailer that shines on like a crazy diamond.

Tracy Griffin is a professional photographer. For the last four years, off and on, she has been working on a project she calls “mirrors”. I haven’t found a description of exactly how she creates the photos, but in effect she makes mirror-image symmetries of trees, causing them to reflect back on themselves. As you can see in the example above, it appears as if the branches are floating.

The web site where I found the photos describes them as “looking alternately like enormous insects, or family crests, or racks of antlers on unseen stags”. Of course, to me and I suspect most of you, they look like black metal band logos — which is why they’re metal. Here are a few more: 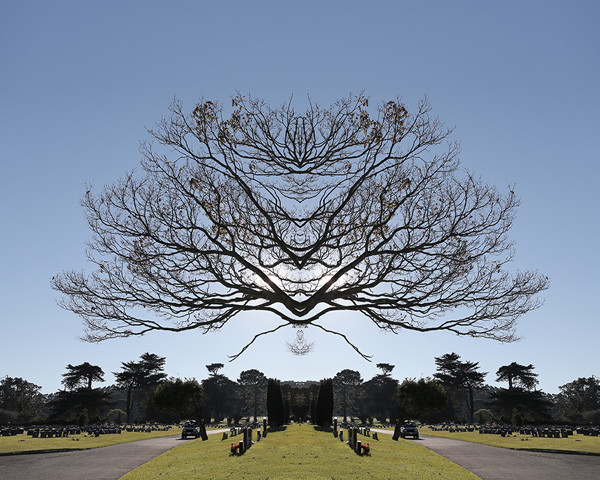 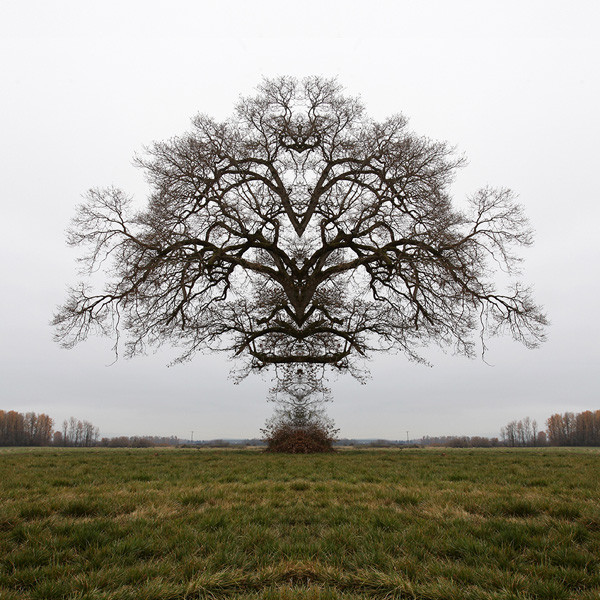 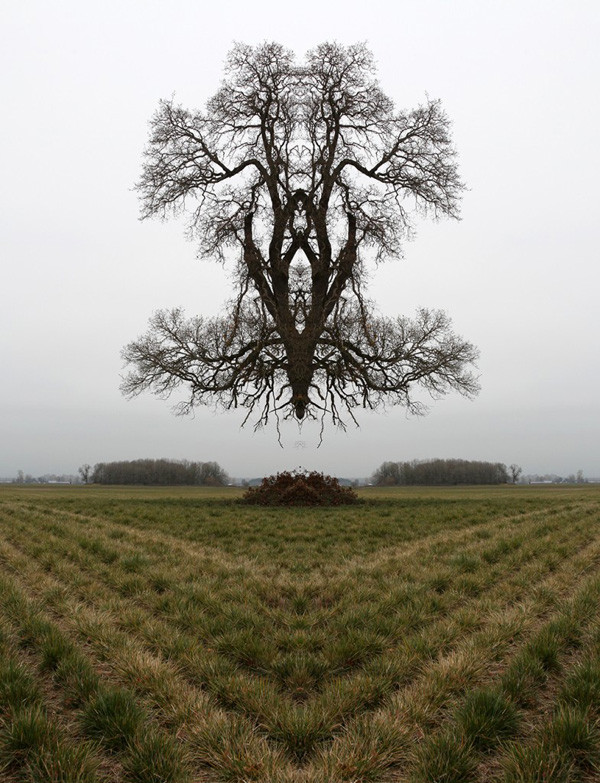 You can see more photos like these at Tracy Griffin’s web site.

(via FlavorWire, and thanks to Phro for the tip on this) 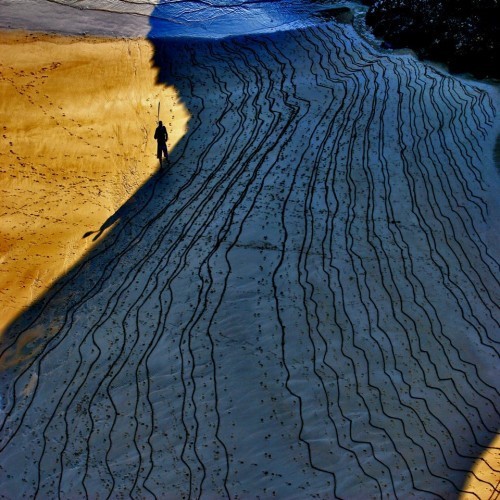 Tony Plant is a British artist. For over 20 years, he has made works meant to be washed away. As described on his web site: “His works are as simple as coloured water, a track through snow, or a group of painted rocks – left for nature to absorb and passersby to discover. These Guerrilla style installations, above and below the tidal zones of some of the most exposed coastal locations in the land, are purely ephemeral, and may be gone within a few waves, a tide or a storm, deliberately made to disappear.” 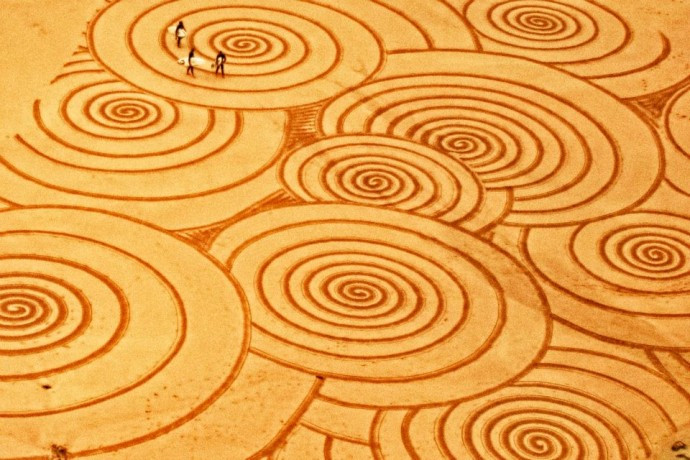 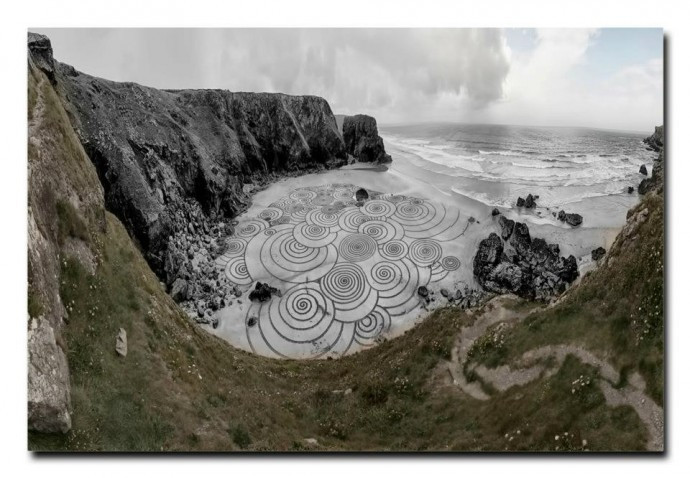 This is metal on two levels.  First, there’s considerable skill involved in being able to imagine a design and then execute it at ground level, when you can’t really see what you’ve done until it’s finished and you’re 100 feet higher up on a headland. And second, there’s something strangely appealing about a desire to create art that nature will erase . . . not in millennia, but in days or even hours.

You can see a lot more of Tony Plant’s work via these links:

Here’s a video of Plant making a sand drawing on the Cornwall coast. It was filmed as a music video for a song named “Until the Luck Runs Dry” by singer-songwriter Ruarri Joseph. The song is on an album due for release in March entitled Brother.

It seems that the northeastern United States got a super-sized serving of snow over the weekend. Impassable roadways, hundreds of thousands of people without power, and just think of how much fun it will be when all that snow starts melting. But, as with all bad things, it could be worse. It could be raining spiders . . . like it did in the southern Brazilian town of Santo Antônio da Platina last week:

I don’t understand Portuguese, but I’m pretty sure those people are saying, “Holy shit, look at all them fuckin’ spiders!!”  As you’ve figured out by now, it wasn’t really raining spiders — the sky was merely blanketed with them, thanks to a web that must have been the size of a soccer field.

A local biologist identified the spider as Anelosimus eximius — a “social spider” species known for its massive colonies and “sheet webs. I don’t speak Latin, but I’m pretty sure that Anelosimus eximius means “Go ahead, shit yourself!”

(via Gawker, with thanks to Raven for the tip about this) 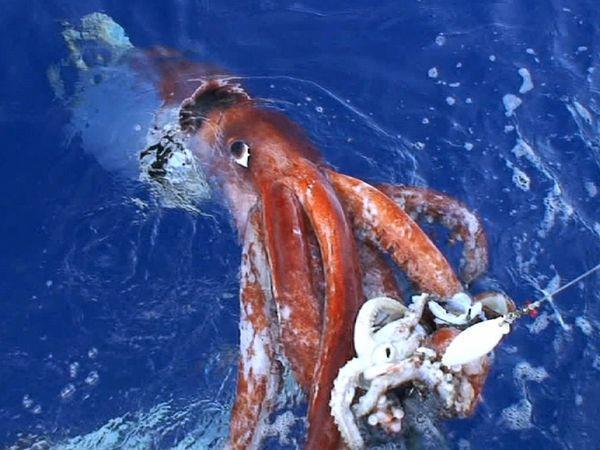 While we’re on the subject of Nature, let’s unleash the Kraken.

A few rare photos have been taken of the Giant Squid deep in the ocean, and even on the surface (like that shot above off the southern coast of Japan in 2006), but last month the Discovery Channel revealed the first live-action film of a Giant Squid ever taken. And in the following video, you can see it.  Along with a group hug by some fuckin’ squid nerds.

Jonty Hurwitz is a scientist and an award-winning sculptor. He brings the perspective of a scientist to the creation of art, and he has come up with some fascinating creations. Take a look at this: 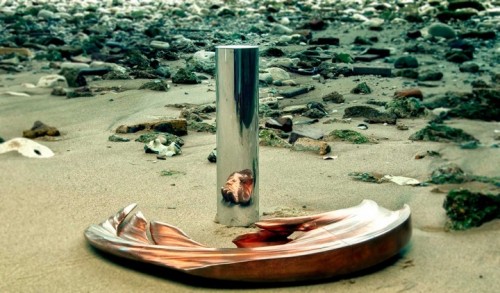 Okay, now take a closer look at that: 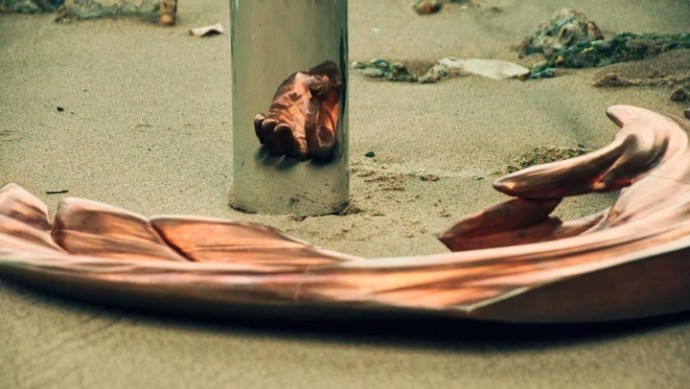 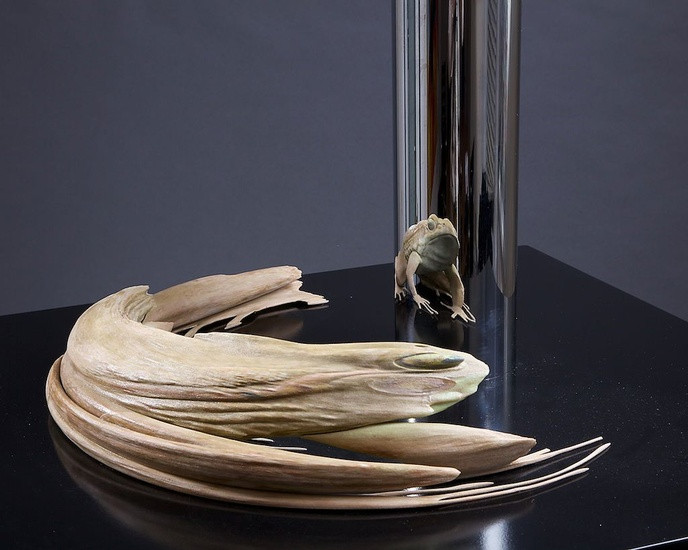 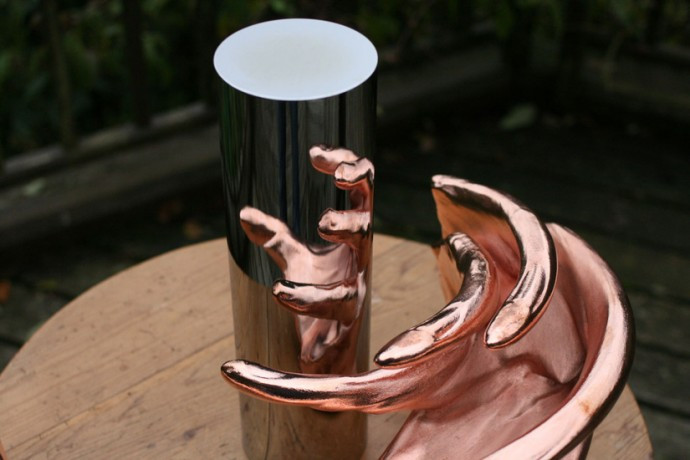 You can see (and hear) more about what Hurwitz has done at his web site.

(via Juxtapoz, with thanks to MaxR for the tip)

And next we have maybe the best condom ad ever created. Not that I’ve seen many condom ads, but of the ones I’ve seen, this one is way up there.

Too bad this was just a “speculative ad” and not one actually created by the Durex marketing department for actual use.

Kudos for the Sonic Youth soundtrack, too.

This was written and directed by Charlotte Rabate and filmed by Thrinnanon Samrej. Nice work.

You know, while I’m thinking about the nasty parts, I’m gonna go ahead and show this next video. It has music in it, but it’s not metal music, so I think it qualifies for this series — because I think it’s metal. It’s also funny; and it gets funnier as it goes on. It’s obviously a response to Mickey Avalon’s “My Dick”. The artist is an Asian rapper named Awkwafina. The video is safe, but the music is NSFW.

Everyone else in the world could have already seen this thing and I wouldn’t know, because I live in a fuckin’ cave made of metal, okay?

Okay, time to wrap up this installment of THAT’s METAL! I guess I’m bending the rules again on this last thing, because it involves music — but again, it’s not metal music.

What if I told you that the extended trailer is fuckin’ cool, in part because it includes a cover of Pink Floyd’s “Shine On You Crazy Diamond” by Kendra Morris that sounds very promising, even if it ain’t metal? Well, see (and hear) for yourself:

Dead Man Down is scheduled to hit theaters in the United States on March 8, 2013.

And that’s all I got for now.  As always, enjoy the rest of your fucking day.