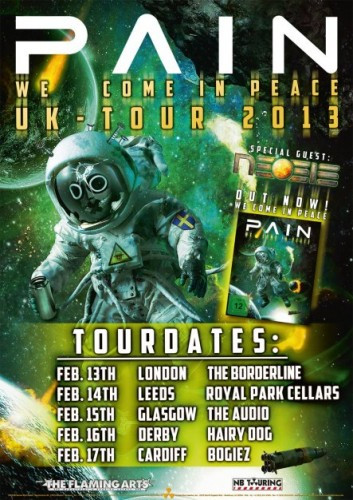 (Our UK-based correspondent Sir Andy Synn experienced his first concert by Sweden’s PAIN in Derby, England, on Feb 16, 2013, and files this report, accompanied by his own copious videos of the experience.)

Ah… Pain. One of many projects of the legendary Peter Tägtgren, where he lives out his electro-rock, industrialised-dance-metal fantasies. They’re all about big riffs, pulsing synths, and heavy beats. They’re also a band I’ve never managed to see before, so tonight’s experience was going to be one for the books.

One thing that became almost immediately apparent about the band was how painfully tight (no pun intended) they were as a live unit, producing an intense heavy metal experience that came straight at the audience in a wall of light and sound. The quartet’s live guitar tone was absolutely crushing, only slightly let down by an occasionally muted lead line, while the thrumming bass and slippery, strafing drums locked together into a tight, sexy groove.

Also immediately noticeable was the odd variety of clientele in attendance. The venue was impressively packed, with individuals and groups from all the different metal tribes. There were balding old-school rockers, pierced punks and neophyte nu-metallers, a host of over- (and under-) dressed goth chicks (varying from emaciated to elephantine), and almost every other permutation of metalhead you could think of!

The band led with “Let Me Out”, a nice, heavy opener with a great mix of chugging riffery, babbling cyber-synths, and catchy vocal lines, which led into a particularly cutting version of “Walking On Glass”, all spite and malice set to a soundtrack of rhythmic riffs and bleeping electronic melodies.

The four men on stage were clearly extremely pleased with the crowd who’d come out to see them, Peter waving his straight-jacketed arms to conduct the mayhem while his companions stalked the limits of the stage, staking their claim to their own little bits of territory, and drummer David Wallin posed and pouted without ever dropping a beat.

The technicolour headrush of “I’m Going In” was a pulsating head-banger of a track, leading into a pounding, sleazed-up rendition of “Dirty Woman”, which got the crowd truly heated up with its AC/DC-gone-industrial vibes.

As good as the show had been up to this point though, the band really hit their high-gear with the one-two of “Zombie Slam” and “End Of The Line”, the former dividing the crowd between ecstatic bouncing and raucous, slamming pit-work, the latter satiating the cravings of the old-school fans for a classic Pain club-anthem.

The four-piece certainly had their stage-craft down perfectly, Tägtgren alternately either gripping his mic-stand in a close embrace or assuming a wide-legged, rock-star stance, while bassist André Skaug and guitarist Michael Bohlin periodically switched back and forth across the stage, without missing their cues for backing vocals which gave the songs a vocal wall of sound. It’s also worth mentioning that drummer David Wallin is a consummate sticksman, moving effortlessly between skittering, bouncing breakbeats and stomping heavy metal beatdowns.

The band next pulled out a tense rendition of “Suicide Machine”, all chaotic synths and tawdry vocal hooks, followed by a pulsating, hammering version of “The Great Pretender”, further displaying Tägtgren’s clever grasp of infectious melody, as well as his oft-underrated vocal range.

The piercing guitars and stuttering electronics of “It’s Only Them” kept the intensity on a high, and was followed up by a simply punishing run-through of  “Monkey Business”, whose pistoning rhythms brought an almost Hypocrisy-level of attack to the proceedings.

You get the feeling that the difference between Pain and the majority of today’s ‘dance-metal’ pretenders is that Pain simply do not give a fuck about being popular. They incorporate some very dance/trance–friendly elements, not as part of some vain attempt at cross-over success but because they understand how much in common these synthetic melodies and driving rhythms have with the basic elements of metal – how they bury themselves deep in the primal part of your brain and make you want to move your body and bang your head.

A stomping, ominous rendition of “Dark Fields of Pain” brought the mood down, with more than a hint of Type O Negative to it, particularly in Tägtgren’s low, brooding vocals, before he declared (to an impressive cheer) that it was time to “speed it up a little bit” as the band blasted into a frantic version of “Crashed”.

The chugging, slinky vibe of “Nailed To The Ground” prompted a mass sing-along from the crowd and again showcased the impressive vocal layering of all the band’s members, before the trance-like vibes of “On and On” signalled the end of the main set, the band exiting stage-left to a wave of applause.

After a few minutes of building anticipation, the group returned for a kick-ass encore, to a frankly massive response from the assembled faithful, diving straight into the storming industrial guitars of “Supersonic Bitch”, and following this with the pseudo-epic keys and massive vocal hooks of “Same Old Song” – prompting another mass sing-along from the audience of Pain fanatics.

Ever the consummate frontman, Tägtgren teased and taunted the audience one last time before the band launched into fan-favourite “Shut Your Mouth”, its bleeping, blooping intro priming the crowd for one last explosion of effort, fists pumping the air, and voices raised high in acclaim.

I left the gig with a better understanding of how the Pain machine works. There’s an undeniable euphoria to their music and performance that connects with the crowd on a very basic, very primal level. Despite the danceable vibes and punishing rhythms though, they clearly don’t care about mainstream success or popularity – they just want to make you move.