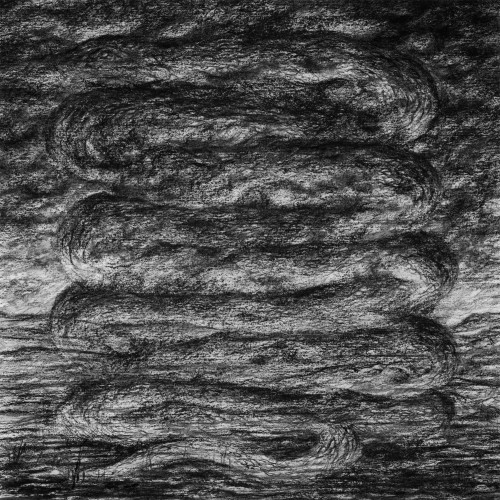 With relatively few hammer blows, Ash Borer have already chiseled their name into the obsidian edifice of American black metal. They’re bringing the hammer down again with the the impending debut of their newest album Bloodlands, which will be co-released on vinyl by Gilead Media and Psychic Violence.

I’ve been following the band since discovering their 2011 split with Fell Voices, and each release has brought signs of growth and deeper exploration into the heart of darkness, with their 2012 Profound Lore release Cold of Ages (reviewed here) really cementing their reputation as a band worth watching closely.

On Bloodlands, Ash Borer continue to throw themselves (even more intensely) into the uses of long-form music as a palette for the creation of emotion-changing soundscapes, and confronting even more daringly the concomitant challenge of maintaining listener interest over songs of extended length: Bloodlands includes only two tracks, one about 15 minutes in duration (“Oblivion’s Spring”) and the second running about 20 minutes (“Dirge/Purgation”).

The average human attention span being what it is here in the 21st century, i.e., only slightly longer than that of a hummingbird, the challenge is evident. But, in the right hands, the opportunities for pulling listeners along in a truly immersive experience also can’t be matched by songs of normal length. This is the tightrope Ash Borer have chosen to walk, high above the ground without a net. On Bloodlands, they walk the line confidently, never losing their balance.

I have one overarching impression about these two songs in comparison to what the band have done before: Although the music is still threaded with melody, it’s more often vicious and more often shrouded in a cloak of grim, bleak, depressive atmospherics. It’s certainly not unrelentingly gloomy, but the ebb and flow of Bloodlands’ tides eventually carry the listener into a whirlpool far out from the safety of shore.

The extended introduction of “Oblivion’s Spring” creates a haunting, wordless ambience with a guitar performance that is both ethereal and ghostly. And then the tremolo’d laceration and blasting percussion come down like a storm, picking up the introductory melody and elaborating on it with a harrowing intensity that’s magnified by cracked banshee screaming in the deep background.

The intensity level of the music drops and rises repeatedly over the course of the song, the melody becoming darker and more brooding, with the indigo atmospherics enhanced through the use of a synthesizer (which plays a more prominent role on Bloodlands than on the band’s previous releases). The synthesizer really takes over in the extended, otherworldly outro, its collection of sounds leaving the listener in a a cold, alien place.

True to its name, “Dirge/Purgation” is a duality. The first part of the song is slow, sombre, and dirge-like, the drummer pounding the timpani in a stately, funereal march and the guitars and synthesizer creating sensations of grief and mourning. Shrouded in distortion, the melody rises and falls, creating a dismal sense of loss and longing. This dirge-like pace reappears again in a riveting interplay between solo guitar and bass in the back half of the song, but in between the band mount an all-out assault, with the tremolo guitars unleashing a scything maelstrom of noise.

As they do throughout the album, the drumming and the inhuman vocals also play key roles in ratcheting up the intensity level, with the percussion achieving weaponized levels of frenzy and the wretched vox mimicking a man being drawn and quartered.

There are certainly passages on Bloodlands’  two songs that are entrancing, but this isn’t pretty, “accessible” music. Even in its most subdued moments, it’s chilling, and there is usually a raw, distorted quality to the sound, which may be due in part to the fact that the instrumental music was recorded live and mixed down on 1/2″ tape.

On the other hand, the performance is far from rough — to the contrary, it’s incredibly tight, the performers turning on a dime as the music moves through its multiple transitions and as layers of texture are added and subtracted to create the album’s strong sensation of ebb and flow.

This kind of demanding, long-form music won’t appeal to people interested in a quick shot of adrenaline or the kind of melodic metal you can carry in your head for days after. But for those who enjoy getting swallowed whole in a sonic journey that leaves you changed by the experience, it’s definitely worth your undivided attention.

Vinyl pre-orders should be available next week at Gilead Media and Psychic Violence. At this writing, I’m not sure whether there are plans for a digital or CD release.

Gilead Media and Ash Borer have recently begun streaming “Obsidian’s Spring” on their Bandcamp pages. So give that track a listen via the player below. I also want to mention that Ash Borer and Fell Voices will be starting a European tour next month, and here’s the schedule as it now stands, along with relevant links: