(The long-awaited fourth album by West Virginia’s Byzantine is out now, and we’re delighted to provide a full stream of the new album along with TheMadIsraeli’s review.)

I wish I could find a way to adequately express how much I was absolutely frothing at the mouth in anticipation of this album.  You’ve got to understand, this is a band who I musically idolized but who I thought had called it quits for good, and while I wasn’t originally stoked on the reunion since it lacked an integral founding member, his rejoining the band soon after sealed the deal for me.  Byzantine were back in business and ass kicking was soon to follow.

I’ve sung the praises of this band to the high heavens on this site already, so if you are unfamiliar with these guys or have forgotten what they’re about, go read my Byzantine discography retrospective, which also included their three previous albums for download.  Get educated.

Anyone who thinks that this album is a mere sequel to Oblivion Beckons would be sorely mistaken.  These guys have been out of the band game for five years, but have still pursued music in a personal way and have thus evolved.  What we have here isn’t a different Byzantine, but definitely a wiser, more sophisticated and diverse Byzantine. 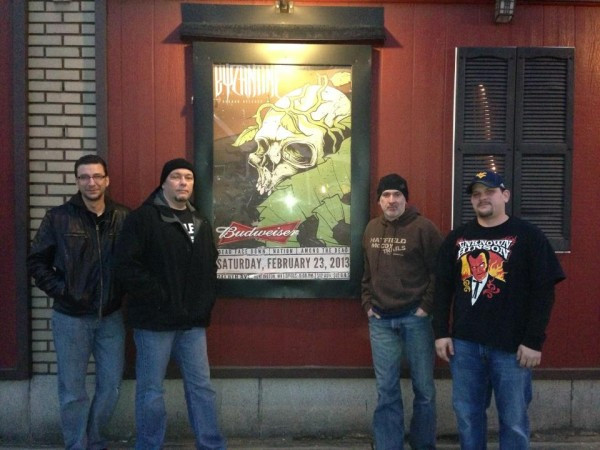 This band still retain their crushing nature, their fire and ferocity, but it’s all been tempered into an exceptionally well crafted, finely honed weapon.  I absolutely love this album, and am really enamored with how Byzantine stepped up their game for this comeback.

The album contains the classic Byzantine mixture of thrash, death, djent, metalcore, and Southern swagger, but these elements are now even more jumbled together to make something energizing, diverse yet consistent, and full of piss and vinegar.  Chris Ojeda’s vocals have never sounded better, and the band plays shit on here that is heavier and faster than they ever have before.  The dynamics have also been turned up, with a bit of an experimental edge in some places that’s extremely welcome.

The album’s opener “Of Which Light Shall Never Penetrate” sets the tone of the album definitively.  Its epic intro with sweeping leads and thick chord walls are smashed into pieces by the song’s main reprising riff, a work of bad-fucking-ass thrash wizardry of a technical sort.  The song’s main riff has a very Testament-like vibe, a thing I can get behind for sure.  The riffs throughout this song are melodic, yet have a sharp, cutting edge and hit hard with just enough technical flare to keep the repeated parts interesting.  The solo, courtesy of understated virtuoso Tony Rohrbough, has his signature awesome stamped all over it.

“Soul Eraser” is a stomping groove steamroller full of Southern swagger that’s just irresistibly catchy.  That is, until its finale crashes through the gates, punishing the listener at breakneck speed.  This song is definitely one of my favorites, mostly for its catchy chorus and, once again, for Rohrbough’s solos.

“Efficacy” is much of the same thing minus the Southern influence.  An epic acoustic intro heralds one of the best songs on the album.  The riffs are classic Byzantine, but something about the groove here is reminiscent of Gojira.  The entire mid-section of this song is amazing, including its melodic progression, the solo, and Ojeda’s clean vocals over the established melody.

“Forged from the Heart of a Dying Star” brings back the Southern influence and is one of the most intense songs on the album.  Its verse is a blistering breakneck thrash fest juxtaposed with infectious grooves and an unforgettable groove variant of the verse riff (introduced as the intro riff).  I’d put this on the NCS 2013 most infectious song list if it were up to me.  The part that really makes this song is its latter half, a very early 2000’s metalcore melodic section full of cool arpeggios and gorgeous instrumental layering.

Then there is “Caldera”, which is the fucking shit — a raucous thrasher full of dissonant, explosive riffs and boiling hot blood being pissed from the eye sockets.  This whole song is awesome, from the opening salvo to the half-time breakdown variation of the verse riff to the (affectionately coined by Ojeda) Gojira armageddon death riff that takes up its last good chunk.

“Signal Path” is a more experimental song for Byzantine, but nonetheless an engrossing one.  Taking on an oddly melodic approach, with a gripping atmosphere, this song mainly showcases Ojeda’s soulful clean crooning.  It’s a more laid back number, but it’s still heavy and brings the goods.

“Everything I Touch Bursts into Blame” is a completely different story though. While the song may be carried by beefy grooves and snake-slither riffs, the weight of the song overall is immense.  The melodic mid-section that leads into its solo is also really cool.

“Posthumous” is a really, really chill song for Byzantine but one of the coolest on the record.  Slow, methodical, and laid back, the riffs are simple but poignant, and the chorus has a really badass mood to it.

This album couldn’t go out without a bang, of course, so it closes on the flesh-ripping “Pathogen”, a full speed ahead napalm trail searing thrasher full of fun riffs and a shitton of balls.  It works as an ending to the album, and seals the deal quite nicely.

I love this band, I love this album, it’s going to stick with me all year and longer I’m sure.  Oh yeah, and we’re streaming this beast below.  Enjoy.

EDITOR’S NOTE: “Byzantine” can be ordered as a CD along with related merch at this location. The album is also now blowing up on iTunes and Amazon mp3.

27 Responses to ““BYZANTINE”: OUR REVIEW AND A FULL STREAM OF THE NEW ALBUM”