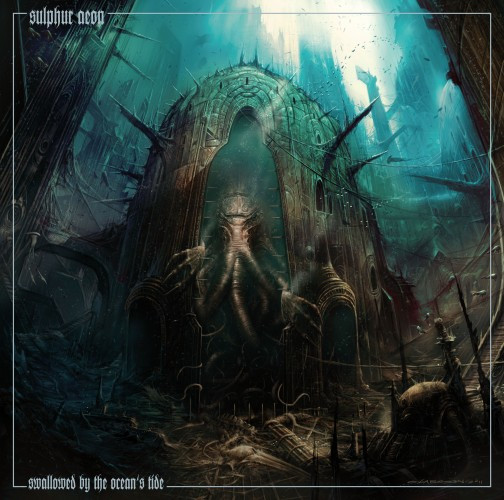 (What follows is Andy Synn’s review of the new album by Germany’s Sulphur Aeon.)

Let’s keep things short and sweet… this is an awesome album. Ass-crushingly evil death metal, with a bludgeoningly heavy guitar tone, a brooding horror-filled atmosphere, and a penchant for matching bloodthirsty extremity with chilling, epic melodies.

The funny thing is that, in all the reviews I’ve seen of the album, people have been throwing around a large assortment of different comparisons and influences – many of which seem either to be a case of people seeing what they want to see… or people copying what they’ve seen others write.

I won’t deny, for example, that there might well be elements comparable to the steamrollering death metal of Bolt Thrower or aspects of Dissection’s scalpel-sharp black metal fury present here, but I think people are fishing, rather awkwardly, when they speculate that these are primary influences… particularly when there are far closer, and far more accurate, comparisons to be made. It definitely seems like one writer felt like they heard a bit of Bolt Thrower in there, and everyone else has just copied him. 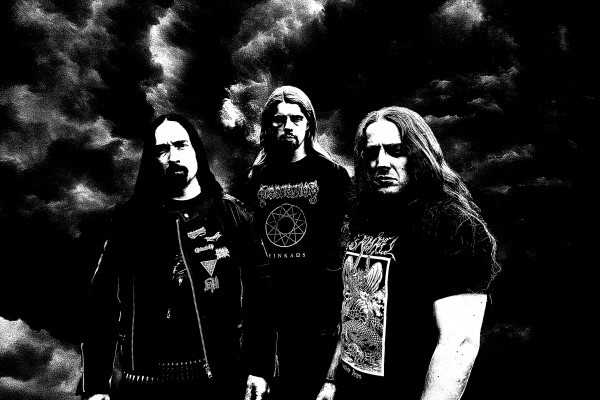 Perhaps the most accurate comparison I’ve seen drawn by others (I’ll get to my own thoughts shortly…) is with the more notably ‘extreme’ work of Hypocrisy, replacing that band’s gloomy UFO conspiracy angle with a more enigmatic, Lovecraftian vibe. Songs like “Inexorable Spirits” (with its massive rhythmic riffs and undercurrent of bleak, misanthropic melody) and the aptly-named “Monolithic” position the band as cousins (if not brothers) to the Swedish masters of death metal majesty, but with a core approach more corrosive and extreme.

Personally though, I think an even more accurate comparison would be with the much loved, and much missed, God Dethroned, if one replaced that band’s militaristic approach with a focus on the conjuring of more esoteric, and horrific atmospheres. The sheer evisceration of “Incantation” certainly seems (to me at least) to strengthen this idea, with its unholy mix of strafing riffs and devastating drumming barrage, interwoven with haunting ambience and scathing tremolo runs, while “Where Black Ships Sail” is an explosive storm of steel and shrapnel not far removed from the sound of Under The Sign Of The Iron Cross, stunningly extreme yet never sacrificing song-writing prowess or incisive melodic hooks.

Another comparison I’ve seen thrown at the band is Behemoth, and while I’m sure fans of the Polish destroyers would definitely appreciate Sulphur Aeon too, it’s a little disingenuous to actively compare the two bands as if they shared a common sound. Granted, they both undoubtedly share some similar influences (the sludgy bludgeon and coiled menace of “Swallowed By The Ocean’s Tide” certainly owes a debt to the conjured chaos of early Morbid Angel, for example), but SA are far from what I would consider “Blackened Death Metal”.

Though there is a blackness and a bleakness to the band’s sound that certainly bears out some of the comparisons with black metal, at least as an underlying influence – if only one of osmosis, rather than by a deliberate choice — you certainly wouldn’t label the grinding riffage of “The Devil’s Gorge” or the doomy thunder of “From The Stars To The Sea” as anything but pure death metal devastation, even when they weave threads of black-veined melody into the chaotic cacophony.

Indeed, the band seem to occupy a point particular to a certain type of European Death metal, a point that shares elements with Black Metal – a common ancestry if you will – which are largely inescapable, but which results in a sound very much separate both from the Floridian sound and from the tenets of Blackened Death Metal as a genre in itself.

It’s interesting, as Sulphur Aeon don’t specifically fall into either camp, and stand very much apart, but are still undeniably and unreservedly death metal to the core. A song like “Beneath. Below. Beyond. Above.” is neither blackened, nor sun-blasted, but somewhere in between – a mutant strain of clinical construction and lethal execution that draws both from the Black and Death camps, without emerging as a simple amalgamation of the two.

For all these comparisons (and I’m well aware that this review has been structured around the proposing and debunking of similarities with other bands and other genres), Swallowed By The Ocean’s Tide is very much an album that can stand on its own. It packs in a veritable arsenal of brutal riffage and gripping hooks, delivered with a powerful dynamic approach based in pulse-racing extremity, but with flashes of doom-laden darkness and majestic, ominous melody. What really sets it apart, though, is its crafting of malign atmospherics, such as the sinister ambience which haunts the edges of “Those Who Dwell In Stellar Void”, wrapping its bone-jarring riffage and throat-rending vocals in a deathly shroud, or the occult aura that permeates darkly triumphant closer “Zombi”.

Ultimately this is an unexpected treat, from out of left-field and right under the radar. It’s got a scope and ambition beyond the limits of simple wants and needs, one that gives back just as much (if not more) as you are prepared to put in as a listener. It’s an album of visceral impact and effectiveness, one that bears repeat listens and deeper contemplation. The atmosphere, the instrumentation, the execution, all combine perfectly to hit you on multiple levels.

Take a chance, let yourself be swallowed by the ocean’s tide.

EDITOR’S NOTE: Swallowed By the Ocean’s Tide is out now on the FDA Rekotz label. Here are two officially released tracks from the album.

19 Responses to “SULPHUR AEON: “SWALLOWED BY THE OCEAN’S TIDE””