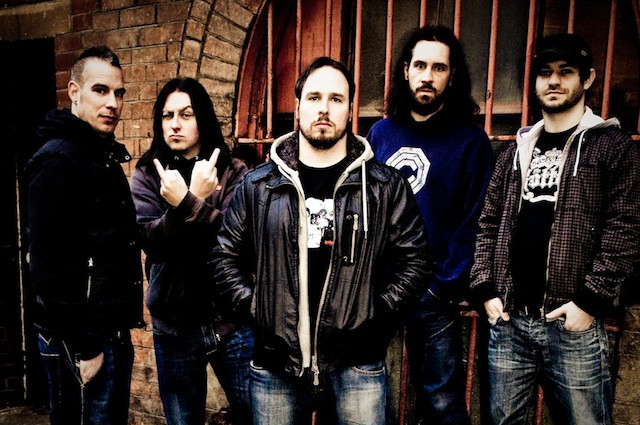 Recommended for fans of: Cryptopsy, Katakylsm, Job For A Cowboy

You want brutal? Well this Scottish band are here to give you brutal, no holds barred, no quarter given. Though they’ve gotten more technical and more complex over the years, they’re certainly no flashy tech-death band, instead delivering gut-wrenching shots to the solar-plexus that qualify their “technical” skills with a big capitalised “DEATH METAL” uppercut.

There’s a scrappy, thrashy underbelly to the band’s armour-plated, tank-like delivery of steroid-injected metallic rage, which allows for some surprising flashes of melody here and there, while the megaton riffage and bulldozing drumming patterns ensure maximum devastation with every listen. Neck-snapping rhythms and sudden shifts in timing and tempo attest to the group’s impressive, but never overblown, technical abilities

The band were actually signed to Relapse until not long ago, and their current status as an unsigned act really is mystifying, particularly when you consider that the band’s sound seems primed to capitalise on the resurgence of both Suffocation and Cryptopsy, while also having one foot (or at least a toe) in the thrash revival aesthetic, as well as appealing to the new-school death metal fans brought into the fold by the tech-friendly stylings of Demonocracy or Deflorate.

Thankfully, the group haven’t given up, and have a PledgeMusic campaign currently active where they’re hoping to get the money to cover the recording and production of their fourth album. If you like what you hear below then I implore you to head over to http://www.pledgemusic.com/projects/manmustdie and show the group some love! 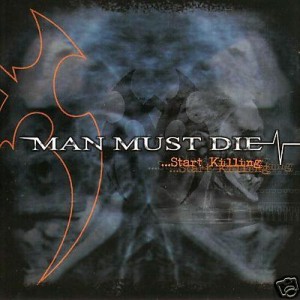 The most overtly melodic of their three albums thus far, the band’s debut record also has the most thrashy roots, and a more primitive feel, coupled with an undeniable youthful energy. Feral and abrasive, it certainly set the stage for the group’s future, heavier, development.

The bone-rattling drums and incisive melodies of “A Lesson Once Learned” kick things off, its Kreat-ive thrash riffage pushing the track forward with gleeful abandon, offset by some twisted, Cryptops-ian rhythmic shifts. The vocals have a very real, very live, feel to them, all snarling aggression and guttural fury, prowling around the music, dropping in and out of prominence where necessary, all leading up to the track’s gruesome, chant-along outro refrain.

The lunatic tremolo runs and cannibalistic riff-work of “All Shall Perish” set an uncompromising pace, backed by the impressively complex and ball-crushing tightness of the drums, before locking in with Danny McNab’s evil, sludgy bass-tone for a brutal procession of crushing, monolithic riffs. This really is the track where guitarist Alan McFarland starts to demonstrate some of his untapped potential, both as a student of the game and as a potential future player, ripping out a spree of killer riffs and ugly chord progressions, as well as the doom-laden melodic interlude that interrupts the track part way through.

“War On Creation” has a slithering undercurrent of melody to it, beefed up by a typically thunderous drumming performance and some occasional slabs of pure concrete riff work, while “Eradicate The Weak” mixes bloodthirsty, blasting intensity with a savage, scattergun thrashiness, over which the vocals continue to spew spite and bile without mercy or remorse.

The album ends with the “Faint Figure In Black”, a melding of cutting guitar melodies and tumultuous drumming which, by itself, goes a long way to explaining why Jean Francois-Dagenais (of Kataklysm fame) was so keen to get involved with the band as a producer. The impressive – if still under-developed – technicality of the band doesn’t lead them to use their abilities to overshadow their songwriting, as the song’s biting mix of tremolo’d animosity and complexity stays with you long after the last note. 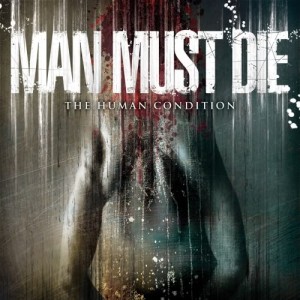 If Start Killing was the sound of the Scottish coven still learning their murderous craft, then The Human Condition is the sound of them turning into professional sonic hitmen, every track a high velocity round of pure, weaponised hatred.

You can immediately tell that everything has been tightened and sharpened since their debut, polished to a gleaming steel perfection, without sacrificing an ounce of power or aggression, as “Silent Observer” bursts into life with furious, murderous intent. The guitar tone is sharper, the drums clearer and more painfully precise, and the whole package simply more devastating on the whole. Despite being under 3 and a half minutes long, the track packs in a host of decimating riffs and slippery changes in tempo, bursting at the seams with renewed vigour.

“March of The Clones” is even more apocalyptic, an unforgiving explosion of skin-flaying riffage and vertebrae-snapping drumming. McGlynn’s vocals are utterly ravenous, yet delivered with venomous clarity, accenting the song’s relentless metallic bludgeoning with an all-too human hatred. The utterly gruesome guitar tone, all bloody meat and fractured bone, is intertwined with a suppurating bass presence, the two parts entangled into a monstrous concoction of harsh melody and raw power.

Taking a longer, more menacing route toward ultimate destruction, “1000 Promises Of Pain” weaves an ominous air with its gallows chords and insidious melody lines before kicking in with a steady, ceaseless pounding of doomy, sledge-hammer guitars. Unexpected and unpredictable moments of sand-blasting violence shift the track suddenly in a different direction before it lurches back into its brooding, ugly crawl.

“Cardboard Gangster” is another hyper-adrenalised number, but one that trades in its top-speed for better handling, indulging in chaotic shifts of timing and tempo that scream, rather than whisper, their supremacy. Grinding riffage and a strangling, suffocating bass tone wear down the listener’s resistance, as a hail of shotgun blast snare strikes rip and tear with pinpoint accuracy. A strange, haunted melodic interlude insinuates itself into the track out of left field, interrupting the song’s brazen bludgeoning for a moment of eerie calm, before the final sturm und grind conclusion.

The ravaged melodies and punchy, organic drums of “Elitist” are a welcome change of pace for the album, focussing more on direct, undeniable hooks than on sheer intensity, although the track’s mid-section is an unforgettable display of orchestrated, organise chaos and confusion that switches back and forth between raging insanity and cold clarity.

The album concludes with the one-two assault of “Organized Insanity” and “Suicide Gene”, the former of which is about as frenzied an experience as its name suggests, held together by a rumbling, thunderous bass presence, while the latter works as a deft summation of the album as  a whole, moving from an ominous intro into a veritable onslaught of scalding riffs and merciless drumming, shot through with black veins of disharmony, which demonstrates that though this bunch of young killers have obviously studied the works of the masters carefully, they’ve also developed some lethal tricks of their own along the way.

NO TOLERANCE FOR IMPERFECTION – 2009 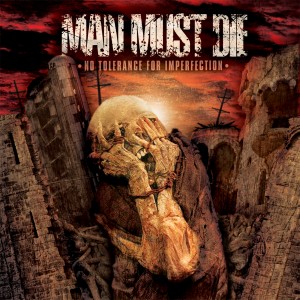 Ultimately Man Must Die’s career (to this point) had all been building to this, No Tolerance For Imperfection, an album about as annihilating as they come and one that should have established the band as a death metal force to be reckoned with.

The album starts as it means to go on, with all dials firmly in the red, and all signs pointing toward destruction, as the title track smashes down the door in an eruption of face-melting extremity. McGlynn’s hellish death vocals are fully dominant, while the machine-gun rhythms and slicing riffs effortlessly pummel the listener into submission. The guitar work is hooky and sharp, stabbing at you with disharmonic melody parts and strafing dissonance, while also building a dark atmosphere, that culminates in the track’s final beatdown of sheer sonic malevolence.

The Kataclysmic blast and tremolo assault of “Gainsayer” does more than simply bludgeon the listener, leaving room for some incredibly catchy riff runs and an undeniable chorus refrain, as well as some moments of outright bulldozing power designed to utterly crush all resistance. The track also benefits from a killer solo, which eases its way in with a cold ambience, before erupting into a furious (if short-lived) spasm of strangled, scintillating notes.

Modern-day classic “Kill It Skin It Wear It” dissects the listener with remorseless aggression, unleashing an absolute firestorm of napalm riffs and acidic bass-runs. The steroid-fuelled drumming which forms the backbone of the track is applied with perfect, bone-crushing force, hammering the brutally infectious chorus down your throat, while the unsettling ambient interlude part-way through merely softens you up for the final killing blow.

“Hide The Knives” is an onslaught of mechanically precise power and apoplectic rage, interwoven with pulsating bass lines and stark, malicious melodies. The frenzied delivery of the track is stunningly violent, but the band don’t skimp on the songwriting by relying purely on overwhelming force, as the track is also irresistibly catchy, from its scything tremolo melody runs, to its neck-snapping, rhythmic riff hammers, to its majestic, spiralling solo.

The dismembering dissonance that opens “Dead In The Water” is matched by a morbid, ugly groove, a blood-pumping, fist-swinging swagger of belligerent riffs and rampant bass-work. The monstrous vocals testify and terrify with rancorous fury, spitting a scalding hail of venom and bile, while the mid-point of the track sees it transform into a blitzkrieg of Misery Index-style grinding death metal, blasting and bludgeoning and brutalising for all its worth.

“What I Can’t Take Back” is a dark and gloomy instrumental which adds another string to the band’s bow, and serves as a perfect primer for “Reflections From Within”, arguably the most ambitious/progressive track on the album, packed to the gills with ferocious riffs, napalm-drenched vocals, and angular, abrasive drumming patterns, as well as having a nice line in haunting atmospheric parts and an utterly phenomenal solo. Stunning work.

EDITOR’S NOTE: The band’s last two albums are available for streaming and download at Bandcamp here. Find Man Must Die on Facebook via this link.