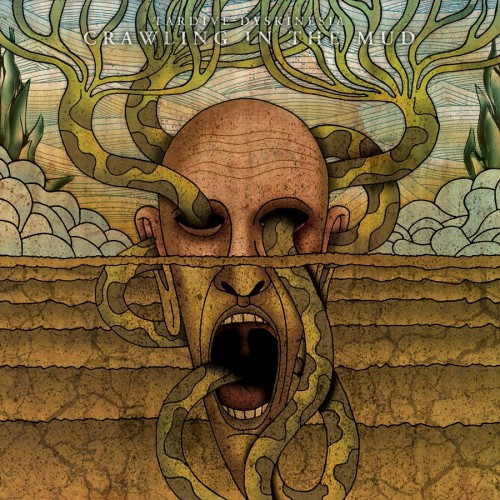 Yesterday, in a post devoted to recent metal art, I included the piece you see above (created by Manster Designs). It mysteriously appeared, without explanation, on the FB page of a Greek band I admire named Tardive Dyskinesia. If I’d only waited a day . . . because now the band have revealed what it’s all about.

The artwork was created for a “new” single named (of course) “Crawling In the Mud”. The song was originally recorded during the 2008 studio sessions that produced the band’s 2009 debut album, the terrific The Sea of See Through Skins, but it was not included on the official release of that album by Coroner Records. As of today, the band have made the song available for free download in a package that also includes two live tracks — “We, the Cancer” (from the band’s latest album Static Apathy In Fast Forward) and “Complicity” (from The Sea of See Through Skins) — plus a high-res version of the above artwork and a band photo and logo.

I’m just going to focus on that “ghost” song “Crawling In the Mud” because I hadn’t heard it before today.

It’s a long one — more than 8 minutes — and it’s a departure from this band’s more usual head-scrambling, rhythmically jarring, “math metal” brand of extremity.

“Crawling” is a “builder”, beginning slowly, with an almost dreamlike drift in the ambience, and growing in volume, intensity, discordance, and heaviness. It’s more of an exercise in extreme prog and post-rock than anything else that appeared on The Sea of See Through Skins, but it showcases TD’s top-shelf instrumental skill and their songwriting creativity, and I’m really liking it.

By the way, the two live tracks kick ass, too.

Here’s a stream of the three tracks on the new single. To get it for free, go HERE.

One Response to “FOLLOWING UP: TARDIVE DYSKINESIA – “CRAWLING IN THE MUD””