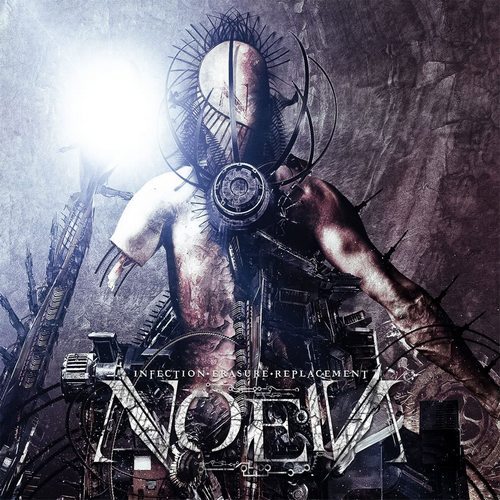 Noein are a fun discovery I stumbled upon by pure accident.  That album art you see above intrigued me, the fact they were female-fronted caught my attention, but most attractive of all was the fact that they labeled their music Industrial Death metal.  I’m always into shit with this tag, even if I almost always disagree that its death metal in scope.

Noein are definitely not death metal, but they display a feral insanity that’s comparable to the likes of old Strapping Young Lad.  Besides SYL influence, what you get is sort of a combination of Threat Signal, Chimaira, and Fear Factory.  Their newest album Infection-Erasure- Replacement is a ballsy, brutal, and savage assault full of industrial-tinged groove and frantic explosions of chaos.

The mood established by this album’s opening track “I.E.R” really sets the tone for the record.  The atmosphere channeled here is futuristic and cold, but with an odd sense of grandeur to it, with swelling synthesizers and ambient guitars.  When the metal kicks in, the track is like a machine revving up to full power, preparing for mass carnage.

“Liars Dream” wastes no time kicking the album into full gear, laying down a carpet-bombing of groove-laden technical melodic riffing with vocalist Jenni snarling over the thick wall of molten steel like a feral mandrill beating in the skulls of inferiors with a rock.  The whole album is nothing but this, double-bass-saturated low-tuned thrashy riffage set to industrial overtones.  Some if it is more tame and melodic, some of it downright manic, foaming-at-the-mouth butchery.

I don’t have much more to say, because in this case I’d rather let the music speak for itself because I do think it’s a bit niche.  I love it, however, and consider Noein to be a band worth watching in the future if they continue on.  It’s a rather eclectic album, as they do a TON with the sound that they are going for.  The album is complemented by a nice production, cold enough to capture that industrial harshness but also retaining a warm ambience that counterbalances it, creating a mood in the sound that is as if the music were struggling with itself.  This adds a rather nice frantic vibe to the sounds.

Check out Noein, and this album.  I’m getting a kick out of it.