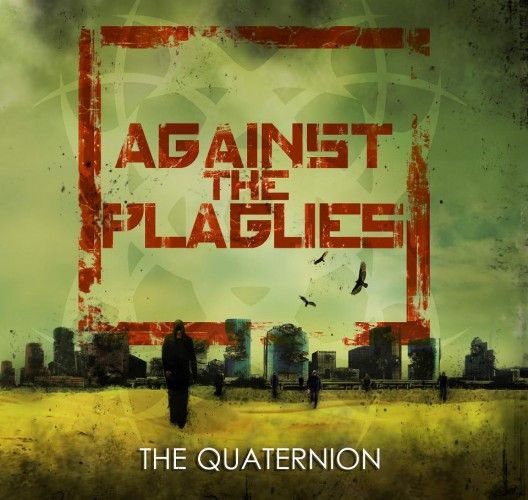 (In this post Andy Synn reviews the new EP by multi-national band Against the Plagues.)

You may not have heard of Against The Plagues before [though NCS did first take note of them here back in August 2010], but their pedigree can’t be denied: This multi-national, Chicago-based quartet features former members of Vader, Forest of Impaled, and Malevolent Creation within their ranks.

Their previous release, 2010’s Decoding The Mainframe, was an impressive slice of death/black metal, whose symphonic audacity and brutal riffery trod a thin line between Puritania-era Dimmu Borgir and Covenant-era Morbid Angel, and saw the band making tentative beginnings at carving out a niche for themselves in a very populated, often very fractious, field.

Now although I am definitely a big fan of the album, at times it seemed to draw its character a little too directly from its influences, with an update in sound here and there to keep things interesting. The band themselves, the Against The Plagues I knew, were in there somewhere, but simply hadn’t fully established a separate identity outside of the confines and constrictions of their chosen genre. The band kicked all sorts of metallic ass, but remained disciples, not innovators.

The Quaternion is different though. More brutal, more aggressive, with a more muscular, steroidal guitar tone. From the moment that misanthropic anthem “Man’s Modern World” kicks in with its wrathful, Vader-esque bombast, you know that the band are here to make a real statement. The vocals immediately display the fruits of the band’s development, eschewing the blackened venom of previous years in favour of a more savage mid-range snarl and a ragged, guttural roar which, while reminiscent of Kataklysm’s Maurizio Iacono at times, helps them to stand out and stamp their own identity on the song with their sheer, unrelenting aggression.

The blasting drums and earth-shaking kick-rolls rarely, if ever, let up in their ceaseless sonic assault, while the guitars accent their furious intensity with cold melodic touches that hint at a blackened undercurrent beneath the tide of titanic death metal riffage. The keyboards have been pared back, yet also better integrated into the genetic structure of the track as a whole, adding atmosphere and ambience throughout, as well as coming further forward during the song’s scintillating mid-section of slicing tremolo runs and spiralling lead guitar work.

Like its predecessor, “Theokratia” is another 7+ minute Behemoth that twists and turns in leviathan coils of molten riffage and bone-breaking drums. Unlike its predecessor it takes its time introducing itself, with a cold-burning intro of dark, hooky riffs and evil keys that steadily picks up steam before transforming into a bulldozing sequence of deathly tremolo runs and crushing mechanical riff-shifts.  The mixture of staccato, pneumatic rhythms and haunting keyboards adds an eerie atmosphere to the track, as do the series of shredding solos that occur prominently throughout the song, mixing ominous mood and shadowy melody, scalding dissonance and searing technicality, and chilling celestial ambience, in turn. The close of the song is simply a barrage of choppy, keen-edged riff work and technical, focussed drumming that locks into a tight, murderous groove to finish things off in lethal fashion.

The helicopter drums and gatling-gun guitars that open “Enemy Herein” set a chugging, unrelenting pace, broken up by a series of brutal stop-start rhythmic shifts, welded to icy, cybernetic melodies and a shroud of solemn keys. An unexpected explosion of blackened aggression sees the song erupt into a more frantic pace, over which the vocals utter a wrenching, throat-tearing series of pitch-black screams and nihilistic growls, while the avalanche of grinding, low-toned death metal guitars that follows should give fans of Hour Of Penance an ecstatic shiver of appreciation.

A creepy serpentine solo shifts the tone of the song toward something more morbid and bleak, dropping in and out of the punchy, climactic riffage only to surge back to the fore with ear-splitting, dive-bombing clarity, before the whole song folds in on itself beneath the sheer weight of colossal death metal riffage and brooding, oppressive darkness.

A brisk, riotous drum fill quickly transforms into a display of blasting aggression as final track “The Praetorian Icon” slams into high gear, allowing the listener to appreciate the relative rawness and focussed power of the mix (particularly when compared to the almost overwhelming, and occasionally over-polished, sound of their debut). It really lets the muscle and sinewy brutality of these tracks shine.

A glorious cacophony of blast-furnace drums and serrated riffs powers the track forward like some hellish engine of destruction, laced with acid-spewing solos and teeth-grinding hooks. Crisp, snappy kick-drum work injects the track with shot after shot of pure adrenaline, while the mid-way deviation into doom-laden atmospherics and darkly dissonant melody provides it with a clever variation in tone and style. The finale of the song is a frenzied series of whiplash riffs that bleed out a succession of lurid, menacing melodies, bringing the whole EP to a bleak and sinister conclusion.

If you’re fans of any of the bands mentioned here, particularly Hour Of Penance, or just in need of a pitch-black, technically precise death metal fix, then head on over to the Against The Plagues facebook page to find out more about the band, and make sure you order yourself a copy of the EP (it’s also on iTunes), along with one of their striking t-shirt designs. I guarantee you won’t be disappointed.

4 Responses to “SHORT BUT SWEET: AGAINST THE PLAGUES — “THE QUATERNION””