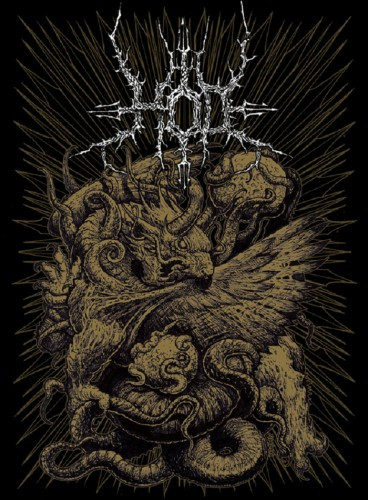 San Antonio’s HOD have been rumbling in the underground since 2007. Their 2009 album Serpent was a vicious debut that marked them in my book as a band to watch. More eyes should be drawn to them as a result of their new demo The Uncreated, in part because two of its three songs recently premiered on the likes of Invisible Oranges and DECIBEL’s online site, but mainly because the music is awfully damned impressive.

The three songs on The Uncreated are multi-layered. At one level, they discharge an electrifying display of heat lightning, powered by blackened, flesh-charring thrash riffs and blasts of machine-gun drumming. The croaking, poison-spitting, mid-range vocals are no less venomous than the instrumentals. At this level, the songs rake flesh like a whirlwind of razors while triggering the headbang reflex quite effectively.

At another level, however, a group of very talented musicians are showing off their technical chops in ways that make this music interesting and mentally engaging as well as physically galvanizing. Rhythms and tempos change frequently. Fret-jumping guitar leads move up and down and all around in an array of alien-sounding arpeggios. The drummer keeps things interesting with a changing array of beats and percussive progressions.

In other words, The Uncreated delivers a thrashing charge of hybridized black and death metal that’s as dynamic and technically impressive as it is primally appealing. I like it a lot and hope you will, too.

It seems that the three tracks on The Uncreated were recorded as part of a new album (Book of the Worm) whose appearance has been delayed as a result of the disappearance of the label (Ibex Moon) that was slated to release it. I’ll be watching for Book of the Worm with high hopes.

You can grab a download of The Uncreated on Bandcamp for $2.50 or a CD for $5.00 at the same location. HOD’s previous releases are there, too. Links and a stream of the demo can be found below, but first, take a look at this very fuckin’ cool HOD logo:

One Response to “SHORT BUT SWEET: HOD — “THE UNCREATED””