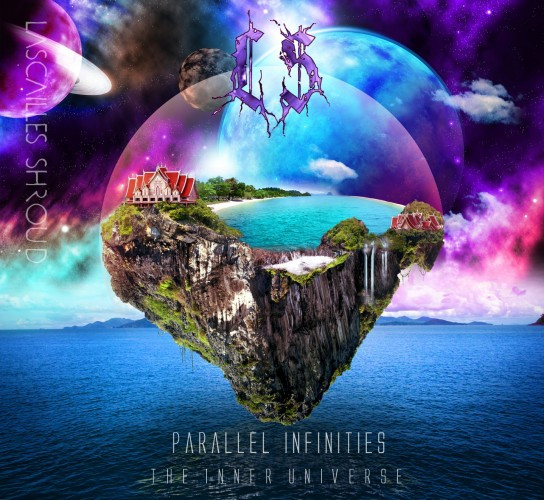 (In this post Andy Synn reviews the latest album by Lascaille’s Shroud, who are based in the Eagle Nebula.)

How are you set for progressive death metal this year? Still looking for that ultimate fix? Well you’ve found it my friend. This is currently one of my top albums of the year, without a doubt.

Now as phenomenal as this album is (and it is), this review very nearly didn’t happen, for a couple of reasons.

1. I’ve been listening to this album a LOT. So I had trouble getting any critical distance from it (yes, I strive to at least pretend to have some sort of distance and “relative” objectivity when doing these things).

2. Other albums have come along and cut the queue. Now although we’re not slaves to the labels or PR companies here at NCS (note the conspicuous absence of banners and pop-ups) we do understand that putting out a review for a more prominent band can serve the greater good. Case in point – if we review a (relatively) big band with a new album out, then that band might get in touch with the site, maybe get asked if we want to premiere a song or a video… and when we do that we’ll attract more new readers, to whom we can then spread the word about other, less prominent bands. You dig?

3. A couple of weeks back a post suddenly appeared on the Lascaille’s Shroud Facebook page about how Prometheus was their favourite film, and if you’re aware of my… less than positive… opinion about that vapid clusterfuck of a film, then you can see why I immediately went and deleted all the band’s music from my itunes and vowed never to listen to them again.

Ok, not really. This album is WAY too good to let something as inconsequential as all that get in the way of things.

The group (a duo to an extent, though primarily masterminded by multi-instrumentalist Brett Windnagle) draw their name from the Revelation Space series of author Alistair Reynolds. His books are truly epic in scale and scope, melding speculative science with both impressive characterisation and an undercurrent of abstract horror. I’ve already taken inspiration from his work for lyrics for Bloodguard and I was fucking ecstatic to see someone else taking this sort of inspiration to the next level, with a full thematic concept binding not only the band’s name and identity, but every aspect of their music.

The sound of Lascaille’s Shroud is multi-layered and complex, widescreen and vivid, with moments of clashing colour and bleak, suffocating darkness. There are moments of mechanised death metal hell which absolutely crush, married to esoteric melodies that soar on solar-winds, fuelled by spectrum-shifting riffage and the meteoric thunder of drums.

The band are the inevitable evolution of the progressive technicality of late period Death, coupled with some of the more audacious elements of Dream Theater and King Crimson, and filled to bursting with the sort of lacerating, cybernetic guitar work that Scar Symmetry would give their right arm for.

Interval 01 (as it shall be known here) is a massive and ambitious piece of work from start to finish. At a whisper under 73 minutes in length it’s a dense, at times even draining, album – but one that never fails to re-energise and revitalise the listeners and reward their dedication and perseverance.

Each of the seven songs has its own distinctive identity, every one standing apart yet contributing to the greater whole. It’s a difficult balancing act – particularly when dealing with the sheer amount of material on display – but one that is carefully managed, providing a plethora of riffs and hooks and interlocking melodic and instrumental themes without ever feeling repetitive or drawn-out.

“Prologue: She Dreams of Earth” ebbs and flows with powerful, elegant grace, marrying pulsing, magnificent riffage and rumbling growls to epic piano and electronic ambience, underpinned by a racing drumming heartbeat and laced with proggy, gleaming lead work, while follow-up “Evolved: Transcendental Cyber-Eroticisms” is a rampant electro-nightmare of siren synth lines and thrusting, piston-like death metal riffs. The song’s shining, multi-layered interludes of synthetic soundscapes and ghostly ambience could almost form a separate song unto themselves, yet serve as a perfect counterpoint to the furious, almost unrelenting death metal soul of the track.

“Resist: Fall into the Arms of the Sun” builds a bit more patiently, introducing the surprising high-range vocals of Patrick Hoyt Parris, whose melodic shriek provides a perfect foil to Windnagle’s thunderous growls. More starkly progressive and creatively convoluted than its predecessors, the track never fails to balance this complexity with a lethal dose of death metal power, unleashing one devastating barrage after another of murderously technical, planet-killing riffs. About the half-way mark the sound shifts into a full-on exploration of strange keyboard patterns, soaring (yet ever so slightly disharmonic) solos, and strained, plaintive vocals, backed by everything from skittering, jazzy drum patterns to full-on blasting, before reintroducing key melodic and riff themes to climax in a display of beautiful devastation.

Fifteen-minute centrepiece “Extinction: Swarming the Sun” is my personal favourite due to its ominous, cybernetic voice-over and bone-grinding riffage. Dark, inhuman synth-skin clothes the dense death metal skeleton of the track with eerie, alien melody lines, while the vocals are delivered in a ferocious growl of breathtaking venom and vehemence. Pulse-racing keyboard leads swarm wildly atop a bombardment of earth-shaking riffs, the dizzying interplay between scintillating electronics and wrenching metallics refined to an almost inhuman perfection, while the drums flex and breathe, mutating between cool, collected rhythm-work and all-out annihilation.

“Dreams: Romancing My Own Demise” is the shortest track on the album by a hair’s breadth, and reintroduces the piercing vocals of Patrick Hoyt Parris into its cacophony of frantic metallic syncopation and glorious, fractured melody. The titanic death metal vocals of Windnagle drag the song into darker waters, vying for dominion over the track’s complex interweaving of brutally efficient, mechanised riffage and gleaming, prismatic melodies. The cathartic chaos of this track is balanced by the careful refinement of instrumental track “Shattered: Love Lost and Worlds Destroyed”, which never fails to capture my attention as it transitions seamlessly from soothing ambience to majestic melody, equal parts constrained, computerised metal power and cryptic, Pink Floyd-ian virtuosity.

“Epilogue: The Acceptance of Death” is the album’s finale, blisteringly heavy and luxuriously technical throughout, producing an amalgam of chugging force, bleeding-edge speed and mind-bending complexity. Scathing blast-beats and searing tremolo work dance in and out of the song’s undulating, intricate guitar lines, which are met and matched by a multi-form mosaic of keyboard and electronic melodies. The second half contains a lengthy, ambient interlude of liquid, narcotic bliss, awash with layers of cosmic melody, which eventually blossoms into the song’s majestic, monumental conclusion.

Devotees of Dream Theater, Cynic, Into Eternity… you need this album…

All those with a love of complexity, technicality, and melody… all those who enjoy being challenged by heavy music… and rewarded for their efforts… you NEED this album.

All the band’s material is available for download on a “name-your-own-price” basis on their Bandcamp, and the digital download of Interval 01 comes with the lyrics as well as a text file detailing the story/concept of the album, comprising an introduction to the setting followed by short chapters for each song.