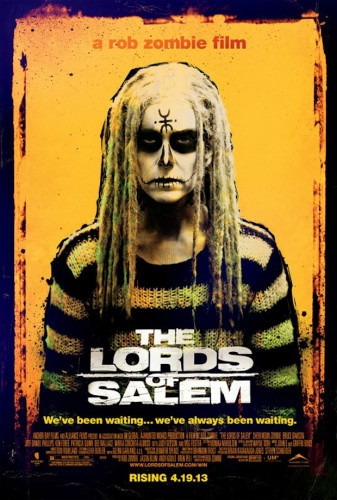 I’ve seen the Woolite commercial that Rob Zombie made because Phro linked to it in an NCS comment once upon a time, but I’ve never seen a Rob Zombie movie. This is because (a) I don’t particularly enjoy horror movies (I scare easily), and (b) because I’ve never particularly enjoyed Rob Zombie’s music. I would add, (c), that I prefer not to spend money on bad movies, except I can’t say the movies are bad since I’ve never seen one. So, I will not be seeing his new movie, The Lords of Salem. However, I have now seen a music video that may be in the movie and is at least connected to it.

The video is for a song by a fictional black metal band named Leviathan The Fleeing Serpent, who apparently appear in the movie, as does the song, “Crushing the Ritual”. Rob Zombie and guitarist John 5 wrote and recorded the song, and I guess that’s Rob Zombie appearing as the corpse-painted frontman, who bears a passing resemblance to Gaahl in his Gorgoroth days.

I guess the song and the video are parodies — but I’m not 100% certain of that. On the one hand, Rob Zombie’s bug-eyed, campy facial expressions, the ridiculous headgear worn by his bandmates, and the selection of words flashing across the screen suggest this is satire. Also, the song has about two chords in it (plus non-stop blast-beats, of course).

On the other hand, Zombie said this in talking with Revolver magazine about his decision to include black-metal imagery in the film:

“There’s a band in the movie called Leviathan The Fleeing Serpent, and they have a music video that they made for a song that’s in the movie. It’s sort of weird, though — for years, Norwegian black metal was the kind of music where I was like, ‘Ah, I don’t get it.’ Then about five years ago, I was listening to Darkthrone or Mayhem, and all of a sudden I was like, ‘I get it now, and I fucking love it!’ A switch just flipped in my brain. I like the music, and I wanted to include it in the movie. That character isn’t part of any sinister plot in the movie, though. He’s just there to add some background color.”

“I like the stuff that sounds really lo•fi. When we [Zombie, John 5 and drummer Aaron Rossi] were recording Leviathan The Fleeing Serpent’s song for the movie, my comment to the producer was, ‘It sounds too good. Make it sound shittier.’ To me, when it sounds shitty, it sounds scary. It sounds real. When the production is too good, it sounds cartoony and operatic. But when it sounds like shit, you’re like, ‘Yeah, this sounds like a bunch of guys who are gonna kill each other.'”

So, do you see why I’m not 100% certain? Okay, I’m 99% certain, but there’s a suggestion here that Zombie and John 5 were really trying to record a black metal song. Granted, it’s not a very good black metal song, but that doesn’t necessarily prove anything (and Zombie’s vocals are pretty horrifying). There’s also the further confusing fact that some corpse-painted black metal bands who play repetitive two-chord songs are dead serious about what they’re doing, despite the fact that they are virtually self-parodies in the eyes of many metal fans.

I don’t really know where I was going with this. Goofy Rob Zombie videos really aren’t the kind of thing we usually spend time on around here. If Zombie really does appreciate black metal, I guess I wish he had done something better than this song, because it sounds like he and John 5 really could have recorded a nasty but interesting piece of bestial black metal if they’d put their minds to it.

Anyway, since I’m not sure why I wrote this, maybe you should leave some comments about whatever thoughts cross your mind when you read this. Here’s the video:

22 Responses to “ROB ZOMBIE GOES BLACK METAL; WHY AM I WRITING ABOUT THIS?”