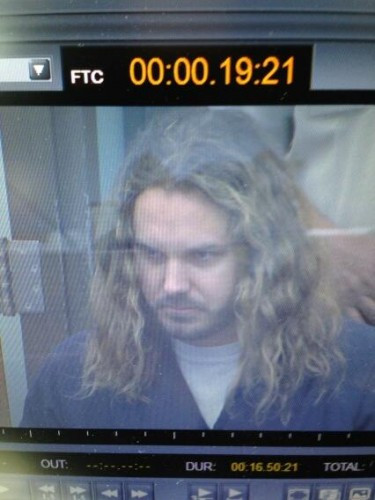 I actually don’t plan to follow this morbid story every step of the way, but based on our web traffic count, there’s clearly been a lot of interest by NCS readers in the arrest of As I Lay Dying’s Tim Lambesis for allegedly attempting to pay someone to murder his wife, Meggan Lambesis. So, we’ll follow the story at least a little bit further.

The latest news (as reported here) is that Tim Lambesis was arraigned in Vista Superior Court (San Diego) this afternoon on one criminal charge of solicitation of murder, which carries a maximum penalty of 9 years in prison. He entered a plea of not guilty and bail was set at $8 million — although the prosecutors asked for bail in the amount of $20 million.

The court further ordered that if Lambesis makes bail, he is to have no contact with his wife or their three children. The next court date will apparently be a preliminary hearing on July 10.

Further details about the hearing and the prosecution’s case emerged from live tweets by Angie Lee, a freelance reporter for San Diego’s KFMB-TV who was in attendance. According to her tweets, prosecutors told the court the following: 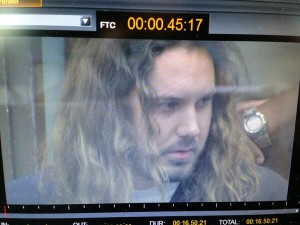 That Lambesis gave an undercover agent cash, his wife’s picture, gate codes, and dates of when to kill her — and told the “hit man” to kill his wife when he (Lambesis) would be with the kids in order to have an alibi;

That prosecutors have recordings of what Lambesis said to the undercover agent; and

That Meggan Lambesis is still afraid for her life, not knowing whether Lambesis”put out other hits”

According to Angie Lee’s tweets, Lambesis’ defense attorney Anthony Salerno said that one phrase that would explain the case against his client is “scum bag snitch set up”. His attorney also said that Lambesis did not intend to harm anyone.

(credit to Metality for unearthing these news sources)

UPDATE: Video of the hearing has now surfaced via an NBC affiliate in San Diego, and it includes still more unsavory details from the prosecution’s case.  Check it out (and the credit on finding this one goes to MetalSucks):