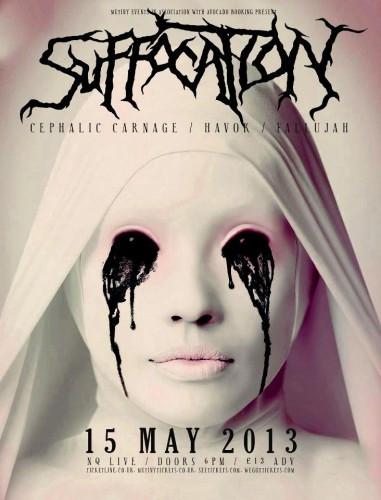 (Our man in the UK, Andy Synn, witnessed a night of death metal fun in Manchester on May 15 and files this report, with video.)

Tonight’s show was courtesy of my good friend Gary of Bite Radius Designs, who recently did some work for Cephalic Carnage on their Crucifreak t-shirt design. Thanks to him we were both put on guestlist and got a chance to enjoy a night of heavy, techy, thrashy, grindy, pummelling death metal fun.

Opening band Fallujah were the youngest and most inexperienced band on the bill, but still gave it their best shot at warming up the steadily growing crowd. Unfortunately, although their spacey, technical death metal works incredibly well on record, it lacks a little something live.

The mix didn’t help their cause, with the rhythm guitar and bass almost entirely inaudible, leaving the band to contend with a mix consisting purely of vocals, leads, and drums. Thankfully, the proggy, cosmic guitar leads are one of the band’s biggest strengths and offer a captivating glimpse of the band’s future potential. They just need to work on a bit more of a distinctive identity for themselves beyond this one aspect of their sound.

Havok were an entirely different prospect, however. Less ambitious, but fundamentally more effective, their shameless thrash worship managed to transcend the fact that their sound is a direct pastiche of Slayer/Anthrax/Exodus/Megadeth/Metallica.

Their sheer enthusiasm turned the music into more than just a parody, the band blasting through an all-too short set of scattergun thrash rhythms, audacious, infectious leads, and barking vocal hooks.

The sound mix had already improved leaps and bounds, meaning you could really appreciate the locked-in guitar work, while the stage banter was effortlessly hilarious, particularly when, after exhorting the crowd to always live for the moment, to drink and party to the grave, the group kicked into “D.O.A.”, a song about drink-driving. Well played lads.

Wandering onstage with little to no preamble Cephalic Carnage dove straight into the short, sharp grind-shock of ‘Persistent Genital Arousal Disorder’, followed (after a rambling, almost stream-of-consciousness introduction) by the stoned-out grooves of “Piecemaker”.

The self-designated “Hydro-Grind” band certainly have a style all their own, switching between spastic, spasming death grind and smoky, flowing stoner metal – often within the same song. Incredibly self-aware, the band injected their eruptions of aural chaos with a welcome dose of self-deprecating humour, not least during the completely made up introduction to “Raped By An Orb”, where you could almost see the wheels turning in frontman Leonard Leal’s brain as he struggled not to crack up. Heck, the corpse-paint and horse-head masks donned by the band for “Black Metal Sabbath” were both incredibly weird and incredibly funny in their own right as well (the song wasn’t half bad either!).

In the end though, the music did the real talking, and I’m pretty sure everyone in the venue were left with a real lasting impression by the band long after they finished.

This would be the second time I’d be seeing Suffocation without infamous frontman Frank Mullen. Last year they came over here with Bill from Decrepit Birth acting as their death metal mouthpiece, this time around they were being fronted by the similarly infamous John Gallagher of Dying Fetus fame.

Kicking in with “Thrones Of Blood”, the band started off in high gear and never once dropped in intensity during the next hour (although it took a song or two for John to warm up – for a while it looked like he was a little lost without a guitar in hand).

As bands go, Suffocation are amongst the tightest, most seamless death metal machines going. And I’m talking psychically tight. The sudden, juddering stop-start rhythms and swift transitions from sandstorm blasting to crushing, bone-breaking slowdowns showcased the band firing on all cylinders, never once missing a beat.

The set-list was an unbroken run of classics, both old and new, with the crowd going particularly apeshit for “Rapture of Revocation” off the new album, along with the killer one-two combo of “Liege of Inveracity” and “Pierced From Within”. I must admit, I lost my shit for “Liege…” along with the rest of them, so things go a little blurry for a few minutes at this point!

Talking of the crowd, they were absolutely up for a night of crazy death metal fun, opening up a number of whirling circle pits (as well as the occasional bruising wall of death), while others dedicated themselves to repeated bouts of crowd-surfing amidst the mayhem. It was also good to see so many people adopting the ‘karate-chop of doom’ made famous by Frank Mullen in his absence. I may or may not have indulged in a bit of that myself, as well as some shameless finger-banging (if you know Frank you’ll know what I’m referring to).

The group closed with a truly brutal rendition of “Infecting The Crypts”, inspiring one last rush of violence from the assembled crowd and leaving everyone pummelled and pounded into submission.