Here are two new videos that appeared over the last 24 hours. Get your melodic death metal on.

The new album from Sweden’s Darkane is named The Sinister Supremacy. It’s their first album in five years and features the return of vocalist Lawrence Mackrory, who last appeared with Darkane 14 years ago on their debut album Rusted Angel. The album also includes eye-catching cover art courtesy of former Soilwork member Carlos Holmberg. It will be released by Prosthetic Records on June 28 in Europe and July 2 in the U.S., and it’s available for pre-order at this location.

Yesterday gave us the premiere of the album’s title track in the form of a lyric video. The words feature such loving phrases as “Violence is all I can see”, “I feed on your fear”, and “Murder is all that I crave”. But don’t worry, there are words of comfort as well, such as these:  “In blood red ecstasy devoured by lunacy / This malicious demonocracy / Death resides in me”.

Okay, the words may not have much touchy-feely in them, but what about the music?

Well, the music will thrash your nuts off, or your ovaries, as the case may be. It’s a high-voltage, high-potency riff-ride, with sharp drumming, a catchy chorus, sweet soloing, and Lawrence Mackrory sounding old-school as fuck (if you went to the School of Thrash, with a minor in Death Metal). Check it out below. 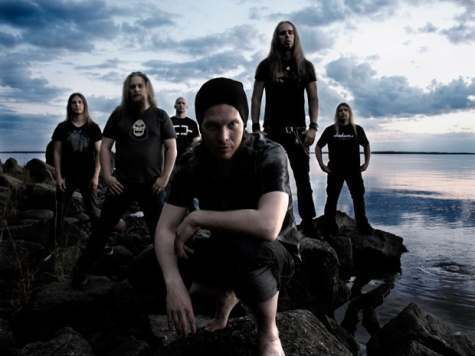 Beyond, the latest album by Finland’s Omnium Gatherum, has proven to be one of the year’s highlights for us. As if you couldn’t guess from the fact that we published three different reviews of it. As bands tend to do, OG performed at a record release party when it came out. It was an intimate hometown show in Kotka, and when the band performed the new song “Formidable”, cameras were rolling. Actually, I guess cameras don’t roll any more. But I bet they were rockin’ at this show.

Honestly, I would rather have heard the live audio with the video instead of the album track synced with the film, just for variety’s sake. But hell’s bells, the song is damned fine, and it’s fun to get a bit of a feel for what this party must have been like. Anyone out there seen these gents perform this year?