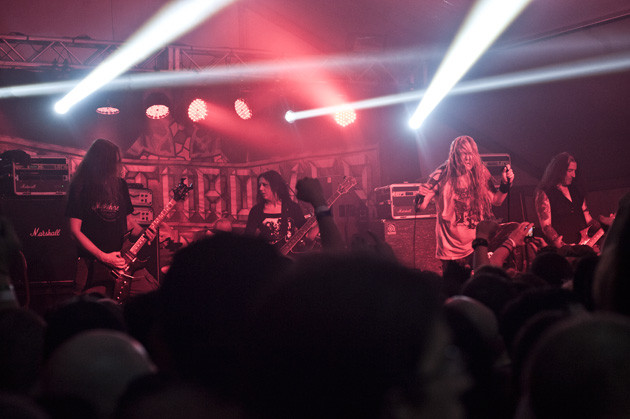 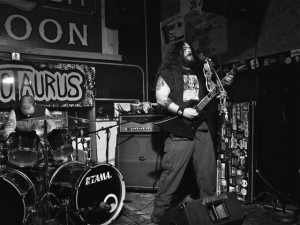 On Monday night I went to the 2 Bit Saloon to catch the latest show by Seattle’s Carnotaurus (I’ve written about them before). Normally a three-man combine, they were missing their bass player due to a miscommunication about transportation to the venue, but that didn’t stop vocalist/guitarist Travis “The Virus” Helton and drummer Brad Navratil from tearing everyone a new asshole with a blast of vicious Mesozoic death metal. Travis gets so much low-end radioactivity out of his Jackson Kelly guitar and his riffing and soloing are so fast that the absence of the bass wasn’t a deal breaker. Carnotaurus are working on a new album that should be out this summer. Stoked for that.

Honestly, since Carnotaurus didn’t start playing until after 10 p.m. and I was looking at a 90-minute trip home, I had planned to leave after talking with those guys following their set. But when the second band started making some attractive noise, I drifted back inside the venue to see what was happening — and thereby discovered Cake ‘n’ Bowls. What a fuckin’ happy discovery that turned out to be! 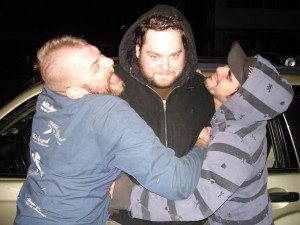 I guess their music was more stoner metal than anything else, but I got some Hendrix-style blues, some post-metal vibes, and a lot of head-swimming complexity in the band’s extended instrumental sections. All three of these dudes — guitarist Tim Kutz, bassist David “Elvis” Bechtel, and drummer Nick LaPointe — can really play, and Kutz and Bechtel have got good, gritty pipes, too. Tim Kutz, in particular, works some serious magic with his guitar and he’s a lot of fun to watch, too. The songs are raw, heavy, and memorable.

I’m hoping these dudes record a proper album some day soon. There are some demo tracks, largely sans vocals, on Soundcloud that I’ve included below, and I’ve also embedded a video of a Cake ‘n’ Bowls show from about a year ago (the music starts at the 1:30 mark).

I was ridiculously excited about the show I attended at Neumos on Wednesday night. It was the first appearance of Bolt Thrower in Seattle since the U.S. tour they mounted after the release of War Master in 1991. Who knows when, or if, they’ll be back? Being there was kind of like bearing witness to an event of historical significance, the chance to see a vastly influential band on stage for the first time in decades. I obviously wasn’t the only person who felt that way — the show had been sold out for many weeks, and it felt kind of like the metal social event of the season.

It turned out to be a stunning performance, too. I had a good vantage point about 15 feet from the center of the stage, right on the far edge of what became a non-stop mosh pit, complete with stage diving and crowd surfing and a dense, roiling, shoving audience behind me, too. The current Bolt Thrower line-up was firing on all cylinders, and the music packed a physical, visceral punch. The whole experience was electrifying. 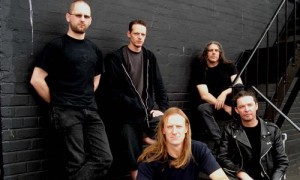 Bolt Thrower was immediately preceded by another vintage British death metal band, Benediction. I thought they were awesome as well. Their set list was weighted with songs that strongly displayed the band’s punk and crust influences, and they got the audience worked up into a lather. Frontman Dave Hunt (of Anaal Nathrakh fame) was tremendously engaging and charismatic, and his humorous and excited between-song banter was a kick to hear.

In fact, both of these bands seemed so excited, so enthusiastic (and maybe a bit surprised) about the intensity of the audience response, and so . . . friendly, that there was a kind of feedback loop created between the people on stage and the people in the audience. It pushed the energy level up into the red zone.

I found the following phone-camera video of Bolt Thrower performing at the show I saw. It’s really rough quality, but gives a sense of the crushing nature of the experience and the crowd reaction. Below that I’ve embedded video of Benediction’s performance at Maryland Deathfest a couple of weekends ago preceding their stop in Seattle.

The last of the three shows I attended during the preceding week came last night at Seattle’s Studio Seven. The main draw for me was the headliner from France, Gorod. But the night turned out to be even more special than I anticipated.

To lay the groundwork, let’s go back to that Monday night show at the 2 Bit Saloon, After the Carnotaurus set, I was introduced by Travis Helton to a guitarist named Ryan Schutte, who was super-friendly, and I really enjoyed the conversation with him. At some point I realized that he played with a band named Lb.! (pound) and that Lb! would be opening for Gorod on Friday night. I made it a point to get to Studio Seven early enough to catch their set. 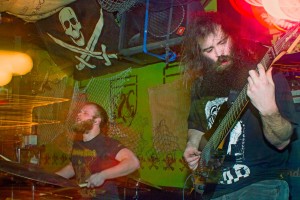 LB.!’s music is right on the edge of utter chaos, with Stickney rocketing through a variety of complex beats and Schutte whaling away on his 8-string guitar at warp speed, each of them seemingly doing their own intricate things, the one disjointed from the other — and yet there’s a mind-bending connection between them. And when they unite in a sludge-heavy, down-paced groove, they turn into a massive headbang trigger. Both of these guys are tremendously talented and exuberant in their performances, churning out a combination of explosive death/grind and catastrophic sludge in a thoroughly original way.

One other cool thing about the Lb.! story: at least a half-dozen old friends of the band from Montana (where the Lb! duo are originally from) made the long-haul drive from Missoula to Seattle for this show. Having heard Lb! perform, I can see why they did that.

I understand that Lb.! is at work on a debut album. I can’t wait to hear it. In the meantime, here’s a clip from a show they did in January at the 2 Bit. It doesn’t do justice to the experience of being present, live, and it’s missing the explosiveness of the band/fan interaction at the larger, more populated venue where I saw them last night, but it’s better than nothing. 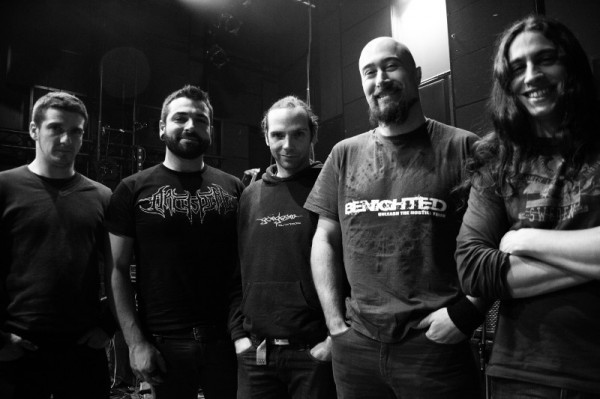 After the Lb.! set, where I was parked at the edge of the stage having my head exploded, I repaired to the balcony bar, where I grabbed a beer and struck up what turned into a 20-minute conversation with a very friendly, bright, articulate dude with an accent. It took me a couple of minutes to realize I was talking to Gorod’s vocalist, Julien “Nutz” Deyres. How I managed not to go into tongue-tied fanboy mode is still a mystery.

Apart from being a very congenial, unpretentious conversationalist, Deyres is a tremendous vocalist and a thoroughly engaging frontman on stage. His bandmates were also all smiles throughout Gorod’s entire set (I don’t think bass-player Ben “Barby” Claus ever stopped smiling). Well, except for guitarist Nicolas Alberny, but his serious expression was justified by the fact that he was delivering some thoroughly badass, technically mesmerizing riffs and arpeggios. 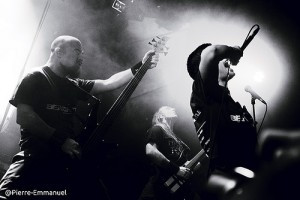 The whole band was completely locked in, executing their fascinating, intricate, highly varied brand of technical death metal as if coordinated by a single mind. And the energy and power of the performances was explosive. I’ve still got a brutally sore neck from banging my empty head so damned hard. There were few off-tempo moments during the set, the band staying with one high-octane song after another and whipping the crowd into a frenzy.

I parked myself in the second row of people in front of the stage, but I didn’t stay parked for very long, because the mosh pit got going quickly and didn’t flag very often. I’m black and blue just from being close to it (and I suppose also from the two times I got caught up in bruising circle pits).

No bullshit: Gorod put on one hell of a show, and if you get the chance to catch them during this current tour, or any other, DO IT.

Here’s video of a full Gorod set in January 2013 in Toulouse, France:

4 Responses to “A WEEK TO REMEMBER”