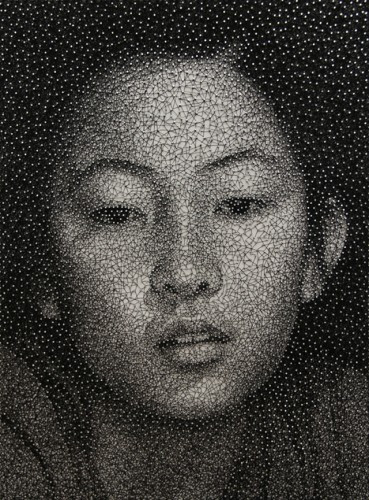 Welcome to another edition of THAT’S METAL!, in which we collect for your amusement and edification images, videos, and the occasional news item that I think are metal, even though it’s not music (or at least not metal music). Today I’ve got eight items for you.

The first item is the image at the top of this post. Take a good look at it. It was created by a Japanese-born artist currently living in New York City named Kumi Yamashita using only three materials, but I bet you can’t guess what they are.

The materials consist of a wooden panel painted a solid white, thousands of small galvanized nails, and a single, unbroken, common sewing thread. Kumi Yamashita created this image and others like it by winding the thread through the array of nails, with the darker and shaded areas created solely by the density of the string and the nails. Amazing stuff. If you doubt me, take a look at the close-up that comes next. 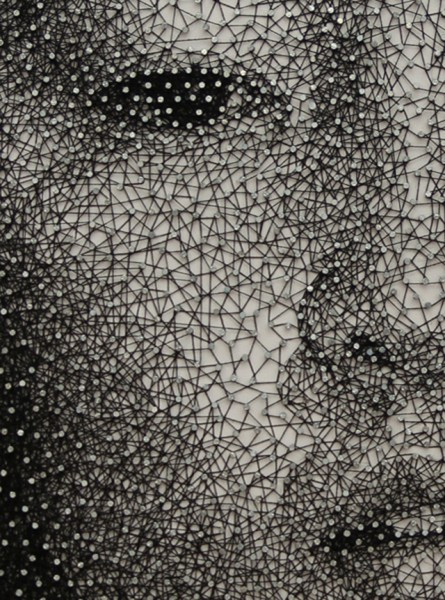 Ms. Yamashita is perhaps even better known for creating art that consists of shadows. Here’s an example of a work in progress, in which a light source on the right side creates a shadow image created by the artist’s arrangement of 3-D numbers: 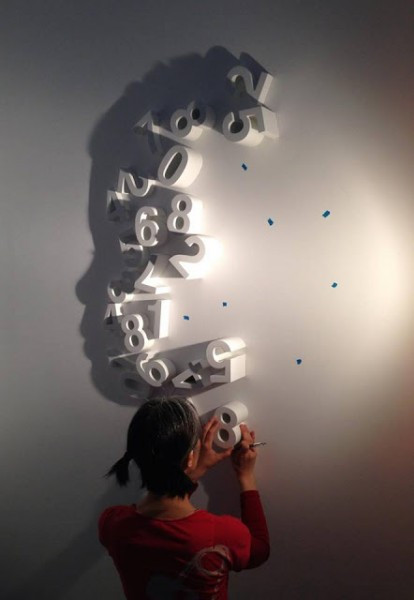 And here’s another one called “City View” that was installed in an office building in Osaka: 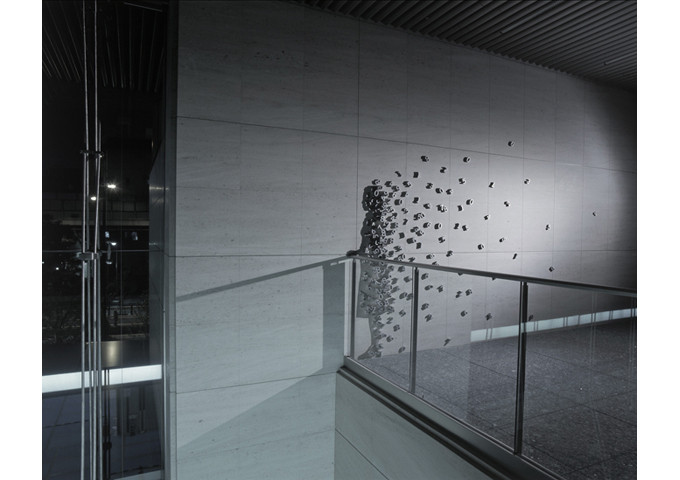 More of her work can be found at her web site, and her Facebook page is at this location.

Our next item has massive geek appeal. First, it involves Legos — fuckin’ shitloads of Legos. Second, it involves The Lord of the Rings. To be more precise, it’s a depiction of the Battle of Helm’s Deep, created using 150,000 pieces of Legos and 1,700 minifigures. The creators go by the names Rich-K & Big J. I can’t imagine the time and patience it took to create this display. Fuckin’ metal. 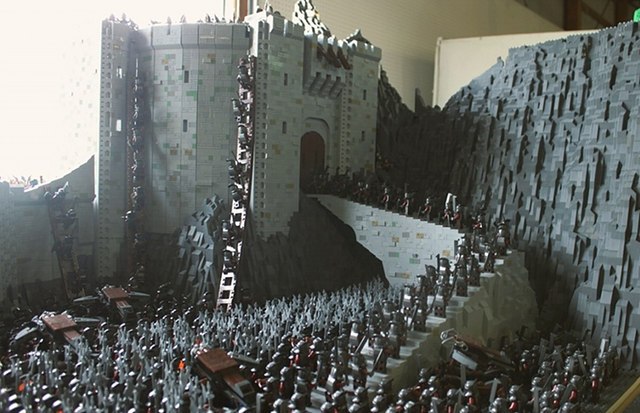 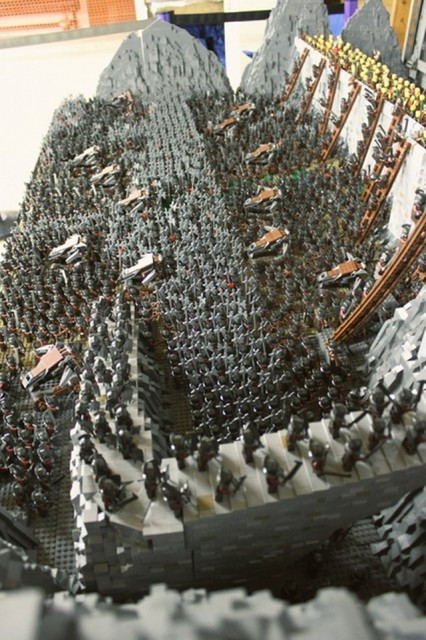 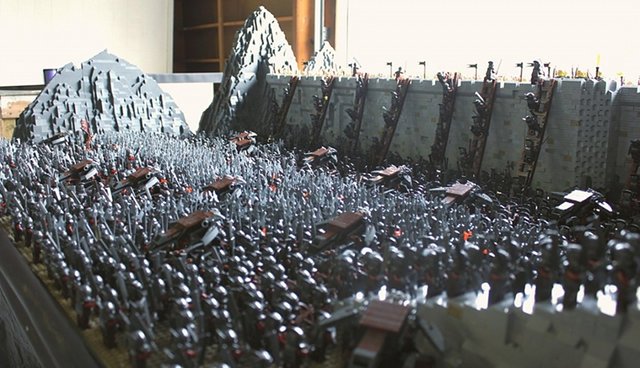 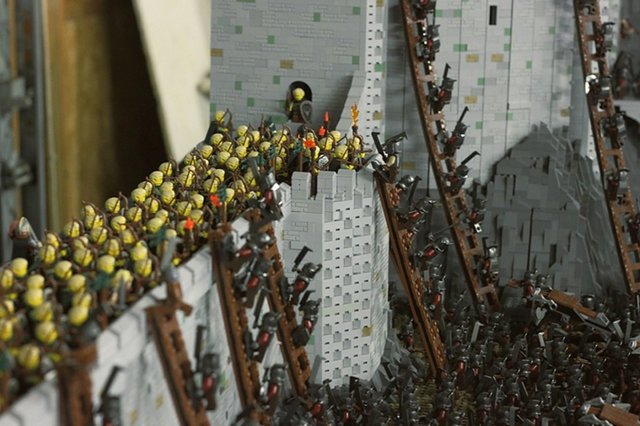 More photos of this stupendous achievement for geekdom can be found here.

I’ve posted items about cheetahs before in this THAT’S METAL! series, but I’m doing it again, because I found yet another cool cheetah video. This one not only has more ass-kicking footage of the beast in action, it also provides some anatomical information about why (as the narrator says) the cheetah has held “nature’s land speed record for 10 million consecutive years”. I also didn’t realize that the cheetah has a rate of acceleration from a standing stop that beats Ferrari’s, Lamborghini’s, and the like.

While we’re on the subject of amazing physical accomplishments, let’s talk about something that happened in the the Section 1 Class AA New York state championship game on March 3, 2013, between the New Rochelle and Mount Vernon high school basketball teams. It took me a little while to figure out what the hell was going on in the following video, so in case anyone else out there is as slow as I am, here’s an advance explanation.

With 2.9 seconds remaining and New Rochelle down by 2 points, Khalil Edney inbounded the ball to half court, but it was stolen by a Mount Vernon player, who then threw it to a teammate back in Edney’s direction. But Edney intercepted the pass and gave a desperation heave from 55 feet away, right at the buzzer — and the shot amazingly went in! That shot completed a 12-1 run by New Rochelle in the final three minutes of the game and appeared to win it.

But, if you look closely, as the New Rochelle team and fans go into a frenzy you’ll see a referee waving off the score because he concluded that time had run out before Edney released the ball. And I think you’ll be able to figure out what happened after that. 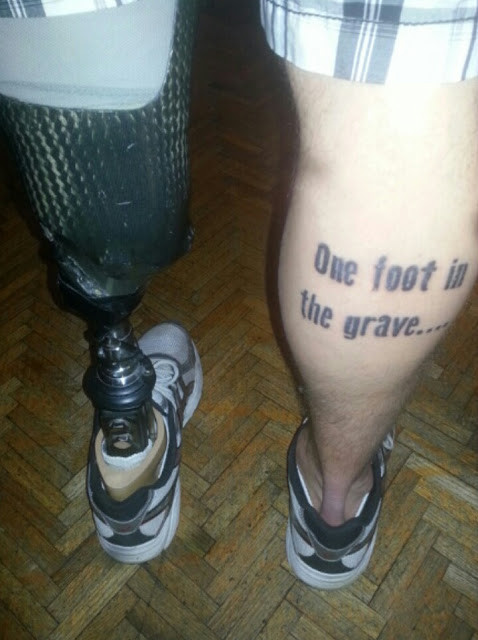 As the blogger from whose site I retrieved that photo said, “When life gives you lemons . . . .”

From The Font of All Human Knowledge: “The Scream (Norwegian: Skrik) is the popular name given to each of four versions of a composition, created as both paintings and pastels, by the Expressionist artist Edvard Munch between 1893 and 1910 . . . all of which show a figure with an agonized expression against a landscape with a tumultuous orange sky.” One of the pastel versions was sold for $119,922,600 at Sotheby’s Impressionist and Modern art auction on May 2, 2012. Here’s one of the versions: 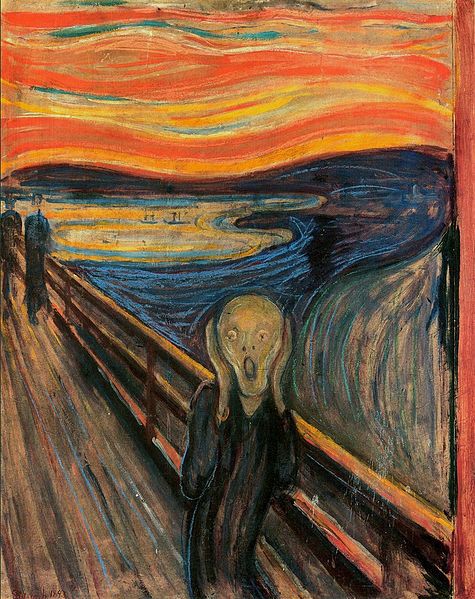 In his diary, Munch described his inspiration for the image:

One evening I was walking along a path, the city was on one side and the fjord below. I felt tired and ill. I stopped and looked out over the fjord—the sun was setting, and the clouds turning blood red. I sensed a scream passing through nature; it seemed to me that I heard the scream. I painted this picture, painted the clouds as actual blood. The color shrieked. This became The Scream.

Munch later wrote a poem about the experience, which he hand-painted onto the frame of the 1895 pastel version of the work:

I was walking along the road with two friends – the sun was setting – suddenly the sky turned blood red – I paused, feeling exhausted, and leaned on the fence – there was blood and tongues of fire above the blue-black fjord and the city – my friends walked on, and I stood there trembling with anxiety – and I sensed an infinite scream passing through nature.

And all of that is background for the next video, which was created by animator Sebastian Cosor, using Pink Floyd for the soundtrack.

The Scream from Sebastian Cosor on Vimeo.

This next item is very fuckin’ impressive — and very fuckin’ creepy at the same time. The man featured in this contest on German television is Rudiger Gamm.  He’s a mental calculator, with the ability to make calculations of staggering complexity in his head. Some mental calculators are also able to memorize enormous tables of the results of calculations, and it almost seems in this video that Gamm is reciting the results from memory after visualizing the numbers in his mind. Either way, it’s pretty damned stunning.

The fact that he’s reciting the numbers in German, coupled with the motion of his head, is what makes this (at least to me) awfully weird — but still metal. 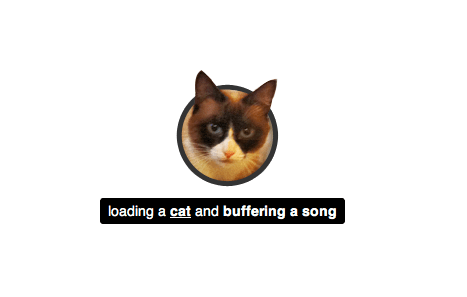 Cat videos and cat memes seem to own the internet. In retrospect, it was just a matter of time before someone came up with the idea of creating cat GIFs (pronounced JIF, by the way) with music. Actually, I sure as fuck wouldn’t have thought of this myself. And the way in which the creators of Procatinator (who are in Barcelona, Spain) have executed on the idea is truly inspirational. The site’s title is pretty damned inspired, too (as well as accurate).

Unfortunately, I can’t embed any of what they’ve done, but I’ll provide links to a few of my favorites. If you wind up wasting ridiculous amounts of time surfing through the GIFs, don’t blame me. Blame Phro. It was he who turned me on to this.

Okay, that’s all I’ve got for this edition of THAT’S METAL! As always, enjoy the rest of your fucking day.