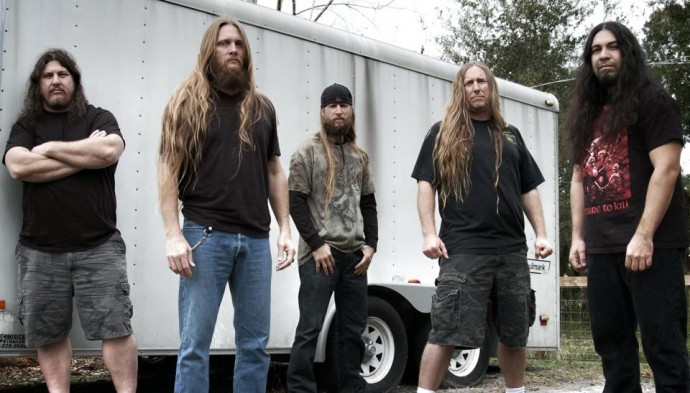 You probably already have important plans for this Saturday night. Maybe you’re going to wash your cat in the kitchen sink using dishwashing soap. Maybe you’re planning to light bags of dogshit on fire in front of the door where your fuckwad of a neighbor lives. Perhaps you’re going to stand on a street corner and yell passages from The Iliad at passers-by on a bullhorn. But if you’re stuck at home with nothing to do but stare at the walls and regret your miserable existence, I’ve got an idea you might consider: Grab a brew, strip down to your underoos, and watch Obituary live in the comfort of your own squalor.

That’s right, Obituary is performing live tonight in Tampa, Florida, and they’re going to stream their entire concert, as it happens, in multi-cam HD quality over the interhole. The performance begins at 8:30 p.m. Eastern Time and will feature sets of music from Slowly We Rot, Cause of Death, and The End Complete. It will cost you $4.99 US dollars to watch.

Also, the band has invited you to take a pic of yourself watching the show and they will put it on their web site, with the winner of the best pic to be rewarded with a “classic” Obituary t-shirt. I’m foreseeing a lot of ugly pics in this band’s future.

I’m going to have to miss this concert myself. I have bodies to bury that are starting to fill up my home with stink. But if not for that, I’d definitely be doing this. Because FUCKING DEATH METAL.

So, HERE is where you go to do this shit, and watch an amusing video invitation to the event. And BELOW is a taste of what you’re in for, the full DVD version of Obituary’s set at Party San in 2008:

(credit to KevinP for the tip on this)

(personal note to KevinP: if you’re gong to this in person, please keep your yap shut about it, okay?)

8 Responses to ““BE READY FOR AN ASS WHOOPING, FLORIDA STYLE””