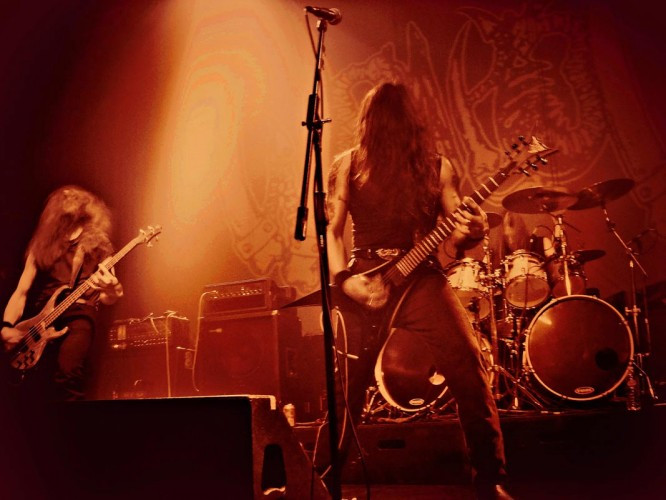 Let’s start with some metal. The song is “Spectral Visions of Mental Warfare” from the 2011 album of the same name by a German band called NARGAROTH. First song I’d ever heard by them, but I thought it was downright beautiful, and it includes throat singing, which is a rarity and a big plus in my book.

Now we’ll go to one of those not-metal songs I heard. The band is named MOON DUO. Looks like they were originally from San Francisco but are now based in Portland, Oregon. The song I heard is named “Mazes”, which appears on a 2011 album of the same name. The propulsive repeating rhythm hooked me, and the trippy lead guitar and looping keyboard melody kept it from getting too saccharine.

Back to the metal, more black metal, to be precise. The band is VITHR (from Bergen, Norway), the song is “Kjøtt og blod”, and it’s the opening track from the band’s 2012 debut Hedensk skikk og tro. This album was released by Demonhood Productions and is available for download on Bandcamp HERE. The song’s penetrating melody really hooked me

Now we go back the other way, to another not-metal song. This time the band is DIIV, and the song is “Doused”. Diiv are from NYC, and the song is from their 2012 album Oshin. Much like that Moon Duo track, the repetition in the song is what sunk the hooks into my head, that and the reverberating guitar melody. Go ahead, call me a hipster if you want.

Metal time again. This time the band is OBSIDIAN TONGUE. I remember their name because they were planning a tour with another Massachusetts band (Autolatry) whose new album I reviewed in May. They have a new album set for release on July 29 by Hypnotic Dirge Records, a label that has released some very interesting, very good music that I’ve discovered for the first time this year. The new Obsidian Tongue album is entitled A Nest of Ravens In the Throat of Time, which is a cool name. It will include guest vocals by Agalloch’s John Haughm on the title track.

One song from the album is now streaming on Bandcamp (here). The name is “Individuation”. You’ll probably notice a completely coincidental relationship between the three metal songs in this post, just as there was one between the two non-metal tracks. Once again, this song is black metal (or at least influenced by black metal), and once again the driving power of the music is paired with appealing melody, which in this case is accented by morose clean singing and a relatively soft instrumental break. Very cool — and it’s evident why the band asked John Haughm to make a guest appearance.

I’ve configured a big Bandcamp player for the song because the cover art for the new album is cool, too.

6 Responses to “BACK AND FORTH (NARGAROTH, MOON DUO, VITHR, DIIV, AND OBSIDIAN TONGUE)”