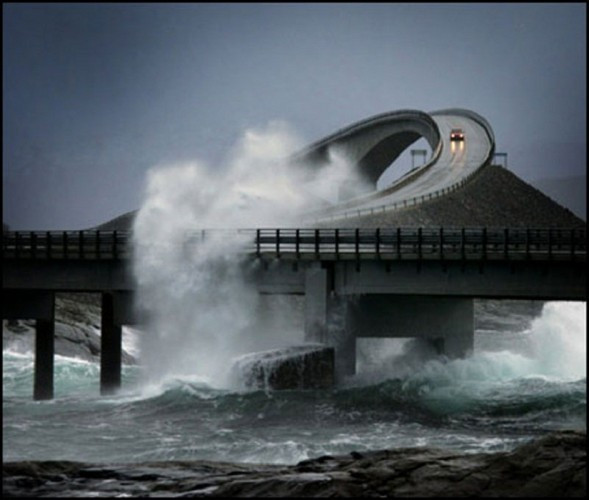 It’s Sunday, and therefore it must be time for another THAT’S METAL! post. Except I don’t manage to put these things together every Sunday, because following a regular schedule isn’t one of my strong suits. Except I’ve done it for today, and I hope you’ll like what I’ve got. In this collection you’ll find eight items, all of which seem metal to me, even though they’re not music.

As usual, we’ll start with the photo that appears at the top. This is part of the Atlantic Road in Norway (“Atlanterhavsveien” in Norwegian). It’s a 5.2 mile segment of County Road 64 that links together a string of islands in the Norwegian Sea and it includes several causeways, seven bridges, and four viewpoints to take in the scenic views.

It was hit by 12 hurricanes during construction, and as you can see, the storms in the area can be pretty fuckin’ brutal. The swooping twists and turns of the road almost make it seem as if it was constructed to dodge the waves.

I have a feeling that if I ever make it to Norway, I won’t make it up and out to the Atlantic Road, but it’s awfully tempting . . . at least it would be if the sun were shining. A few more pics are after the jump. 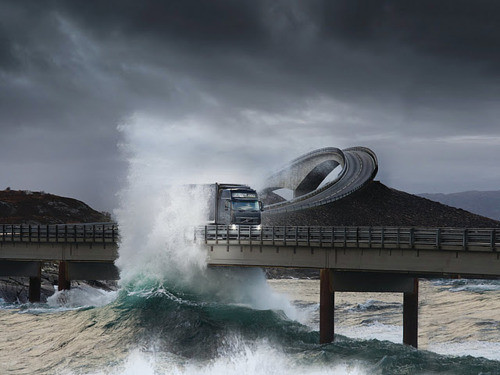 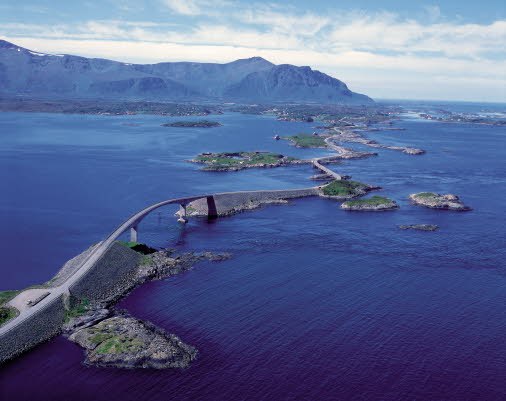 While we’re on the subject of stormy weather, take a look at this satellite photo. It’s called a false-color image because it combines certain wavelengths of light in order to distinguish surface features. In this photo, vegetation is red. Focus on the beige-colored seam running west to east across the middle of the image. There’s no vegetation there. 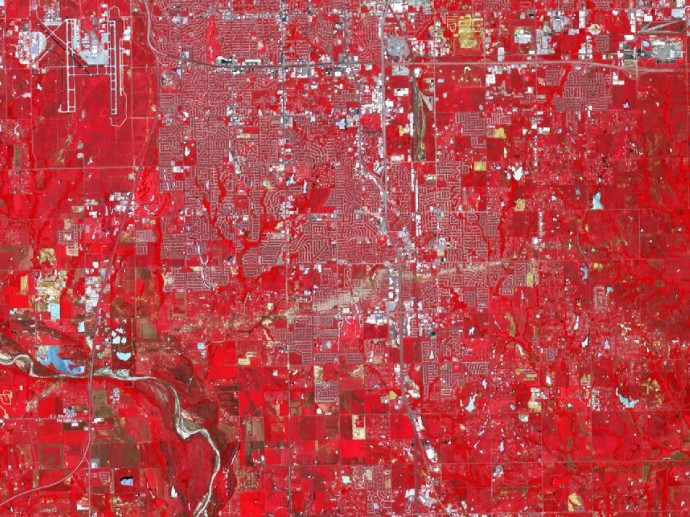 What you’re looking at is a photo taken on June 2 by the Advanced Spaceborne Thermal Emission and Reflection Radiometer (ASTER) on NASA’s Terra satellite. It shows the path of destruction left by the Newcastle-Moore tornado that devastated central Oklahoma on May 20, 2013. It was an EF-5 tornado — the most severe on the Enhanced Fujita scale — and the deadliest in U.S. history. It killed at least 24 people, injured 377, destroyed or damaged at least 13,000 structures, and caused more than $2 billion in property losses.

According to the National Weather Service, the tornado was on the ground for 39 minutes, moving 17 miles from west of Newcastle to east of Moore, Oklahoma. “At its peak, the funnel cloud was 1.3 miles (2.1 kilometers) wide and wind speeds reached 210 miles (340 km) per hour.”

And all of that info is just preparation for this jaw-dropping video. And I mean that literally; at some point as I was watching it, my jaw dropped open and stayed that way to the end. There’s nothing metal about the the death and destruction this tornado inflicted, but there’s no denying the frightening power of what’s captured in this video. If you’re impatient, skip to 1:30 for the start of ground contact.

This is Julius, opening a door at 1 a.m. Once seen, it cannot be unseen. I hope you will forgive me.

Julius Escaping from Jenner on Vimeo.

Okay, I know I was a bad motherfucker for doing that, so let me try to make it up to you. This way, you can take your ice cream anywhere you want.

I know it’s going to be tough to top that last item on the metal-ness scale, but I think this next item will do the trick: the insect world’s version of a tornado. Imagine a yellow jacket hive that’s more than 6 1/2 feet tall and more than 8 feet wide, housing a thousand queen wasps and a million “daughters.” Now imagine that it’s your job to get rid of it.

That’s what Jonathan Simkins had to do. He’s a professional exterminator who was hired by the owners of a thousand-acre timber lot in Central Florida to get rid of a hive the size of a smart-car. Here’s an excerpt from an article about the event:

“When I first went out there, this colony was camouflaged. I didn’t even see it until we walked up to it.” But they saw him. Sentry yellow jackets buzzed toward him to check him out when he was still 40 metres away. Clad in two bee suits, the veteran stinging insect expert stirred up the nest a few times to study the wasps’ method of defence.

“The noise was amazing. It was like a yellow jacket tornado coming for me. The alarm pheromone was so strong it made my eyes water and my nose run. When they land on you, they regurgitate so the others can find you.”

Of course, he took video of what he saw. The noise is indeed amazing. Scary as shit.

Wings of Life is a 2011 French-American nature documentary directed by Louis Schwartzberg. In France, its title is Pollen, and for good reason: the subject of the film is the interplay between plants and flowers and the variety of pollinators who enable the species to reproduce. The following is an excerpt from the film. It’s is a high-definition, super-slow-motion video of insects and bats pollinating flowers (and of butterflies in flight). Amazing to watch. As the author of the site where I saw this wrote, “If you don’t take advantage of the full-screen button for this video, you might as well not have one.”

Bats are metal, by the way. But I never knew they were pollinators.

I live in the vicinity of Seattle. We have an amazing public library in downtown Seattle. It opened in 2004 and was designed by Rem Koolhaas and Joshua Prince-Ramus. In 2007, the building was voted #108 on the American Institute of Architects‘ (AIA) list of Americans’ 150 favorite structures in the U.S. The building received a 2005 national AIA Honor Award for Architecture.

In May of this year, to help publicize a summer reading program, the Central library organized what became a world-record book domino chain, lining up 2,131 books and knocking them all over. It took all day to get the books to fall just right — five tries, with the fifth one coming at 11 p.m. No wonder people went kind of nuts after it finally worked. Cool thing to watch, and it gives you a feel for what our Central library looks like.

I’m going to wrap this up and leave you with a short tilt-shift/time-lapse video of Amsterdam. I’ve featured tilt-shift/time-lapse videos before in these THAT’S METAL! columns . . . because I think they’re fuckin’ metal, of course! Pioneered by Australia’s Keith Loutit, they’re a way of using time and focus to create an illusion of miniaturization using images of real-world, life-size scenes. But Keith Loutit didn’t do this next one. It was created by Pieter Manders.

Apart from the video, I got hooked on the piano music that provides the soundtrack. It’s by a young guy named Oskar Schuster. The video doesn’t identify the song, but after some poking around I found it. The song is “Les Sablons”, and it’s off a Schuster EP entitled Les Valses Invisibles, which is on Bandcamp here:

“Les Sablons” is available for free download here. And with that, I bid you adios motherfuckers.