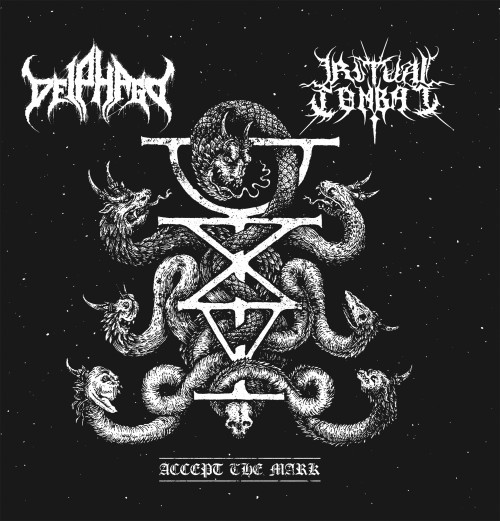 Last fall a U.S. label named Red Stream Inc. made a limited CD release of a split entitled Accept the Mark by two sonically destructive bands — Deiphago and Ritual Combat. Now, the German label Iron Bonehead Productions is on the verge of giving the split the vinyl treatment, and that gave me the opportunity to hear the split for the first time. Here are some thoughts about it, plus the chance for you to hear one track from each band’s two contributions (we thank Iron Bonehead for giving us permission to do this).

Deiphago, who we’ve written about repeatedly in the past, were initially what caught my interest in this release. Originally from The Philippines and now based in Costa Rica, they’ve mastered the art of inflicting black/death musical assaults that are both incinerating and transfixing. Their 2012 full-length Satan Alpha Omega was one of the best in this genre that I heard last year, and their two songs on Accept the Mark are just as compelling.

“Beast of Annihilation” is an original song that will eat you alive from the head down. It’s a mass of uber-distorted, vicious riffing, snare-heavy beats, and reverberating bestial barks and howls. Massive bass vibrations segment the maelstrom in brief slowdowns, and a shrieking solo tunnels into your skull like an overheated drill. It’s an eviscerating, brain-slamming experience.

The second Deiphago track is a cover of “The Last Slaughter”, a song released in 1987 by those widely venerated Brazilians, Sarcófago. In this one, massively heavy old-school riffs punctuate the catastrophic storm of distortion, and the band’s vicious engines alternately slow down and accelerate, leaving wreckage in their wake. Deiphago also add some nice touches at the song’s finish, putting their own twist on the original’s surprising outro — a chaotic, experimental guitar solo and, of all things, what sounds like a Sousa march.

I’d be hard-pressed to pick which of these two violent tracks is the best. They both kill.

Ritual Combat are from Los Angeles, with one full-length on their resume, 2010’s Occultus Requiem. Their tracks on Accept the Mark were my introduction to their music. Both songs, “Red In Blood and Death” and “Black War 666”, are examples of raw, bestial black metal, shot through with blasting snares and scathing tremolo-guitar vitriol. Hammering riffs strike with feral power, and writhing melodies surface and submerge in the whipping cyclone of holocaustal distortion. Inhuman shrieks can be heard through the torrential roaring, like the distant cries of a torture victim with only minutes to live.

This is intense black metal, ugly, hateful, and caked in grime and guts, but with some memorable morbid riffs riding the palpable waves of malignancy that drive the music.

The Accept the Mark vinyl, which will be limited to 500 copies, should be available for order soon via Iron Bonehead. It’s still available on CD from Red Stream and from Hells Headbangers. The cover art is by Alexander Brown of BNB Illustrations.

2 Responses to “SHORT BUT SWEET: DEIPHAGO AND RITUAL COMBAT — “ACCEPT THE MARK””