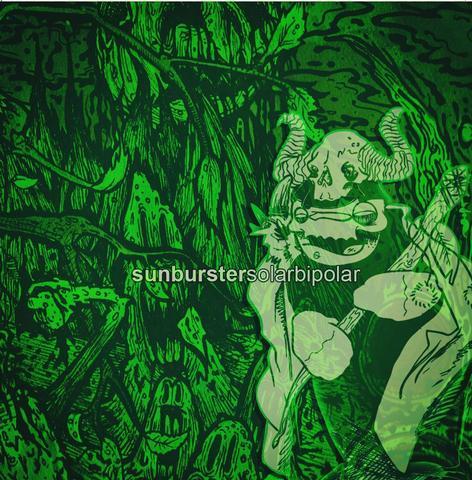 One thing leads to another. In late May I came across a compilation by the name of Anthrosphere IV assembled by Philadelphia label Anthropic Records. It includes some stellar tunes, and so I wrote about it here. One song that I singled out for specific praise was from a stoner/sludge/doom band I hadn’t heard of before named Sunburster. And that led to the discovery that they’ve got a new EP coming this August named SolarBipolar, and a chance to hear it in advance.

The EP includes three songs of increasing length. All three remind me that you don’t need brain-scrambling complexity or high-wire instrumental acrobatics to make a great song. Sometimes the simplest tunes can be the ones you remember the longest and enjoy the most, though it takes a special kind of songwriting ingenuity to pull off that trick, and it helps a lot for the band  to have the power of the music in their blood. Sunburster bring all that to the table on SolarBipolar.

“War Torn” is the shortest and simplest of the EP’s songs. From start to finish, it’s essentially one repeating riff, in sync with the drumbeats. It’s immense, spine-smashing music that exerts its magnetic pull almost immediately, and most definitely will bind itself to your head by the end. Mike Murro’s raw, high-pitched, bleeding-wound vocals contrast effectively with the music’s staggering low end. 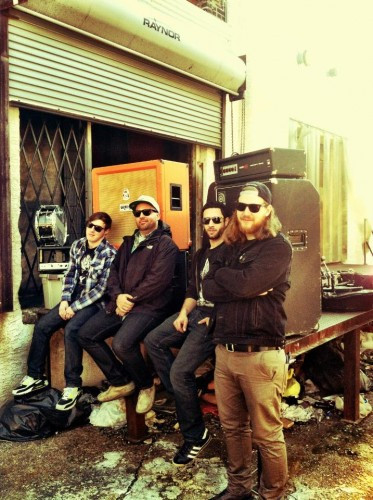 “Candle In the Wound” is more varied, with fret-sliding riffs (which reminded me in a way of Gojira’s signature guitar-groans) transitioning into a combination of pile-driving jabs and warping guitar chords. It’s as infectious as it is heavy, and Murro’s vocals will still strip the paint from your walls while you bang your head like you mean it.

“Setting Sun” starts with a squall of feedback and another one of Jordan Berk’s damned infectious repeating riffs, which segues into an ingenious melodic progression, Murro’s vehement high howls again contrasting with the massive pavement-busters crunching away in the low end. But in this song, the doom elements that insinuate themselves into the first two songs get free rein as the music eventually morphs into a ponderous crawl that’s so fuckin’ heavy. The song also treats us to the first real guitar solo on the EP, an extended twisting/turning bit of psychedelia that makes another nice contrast with the gut-rumbling bass that takes center stage in the song’s finish.

This is the kind of music that will give your neck muscles a real workout while dosing you with a narcotic addictiveness that will pull you back for another hit, and another. I know. I have plenty of other things to do, but I’ve been jamming this little three-song smasher over and over again.

And I’ll tell you what I really want: What I really want is to hear this shit live, with the PA system turned to 11. Possibly it could liquify my guts, but I’d go out with glazed eyes and a stupid grin.

You can pre-order a copy of the SolarBipolar 7″ vinyl at the following location. It’s a limited pressing of 420 copies and is scheduled to ship in August.

“War Torn” is available for streaming at Stereokiller (where you can also hear some previous Sunburster tunes), or via the player below.