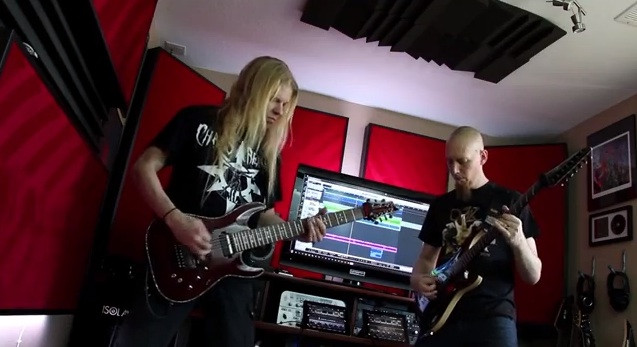 Yes, my friends, yet another crowdfunding campaign has been launched by yet another band (Conquering Dystopia) who need help financing a recording. To be precise, they would like to raise $15,000, with most of the money going to professional audio mixing and mastering and the rest to be used for travel expenses and creating merch. And in less than a day they’ve already raised $12,301 as I write this.

When you see who’s in this band and the perks they’re offering for donations, you’ll understand why the money is already rolling in at such a fast pace. Here’s the line-up:

That’s an awful lot of metal goodness in one band. All the way back in January, Keith Merrow put up a Facebook status in which he said that he and Loomis had decided to collaborate on an album, but not many details have surfaced since then, until yesterday. Last month we featured a video jam by those two (plus Ola Englund), still not really knowing what was cooking. Now we know.

It appears the album will be purely instrumental, but with talent of this caliber behind it, there’s a high likelihood it’s going to explode heads, with or without  vocals.

There are a ton of perks on offer for people interested in helping finance this project with donations, ranging from a digital download of the album when it’s finished to two autographed Schecter 7-string guitars used on the album (one signed by Loomis, one by Merrow — and one of those has already been claimed).

Also on the menu are dinner with Keith and Jeff in Seattle (already sold out), a Jeff Loomis guest solo on one of your songs (for you band members out there), and the chance to have Loomis and Merrow write a song just for you (or a friend) and perform the song on video. There are also Skype guitar lessons, limited edition vinyl of the album, and a whole lot more.

For all the details and to make a donation, go to this location. But you’d better hurry — some of the juiciest items are selling out fast.

Below is the video pitch for this campaign featuring Jeff Loomis, Keith Merrow, and a bit of guitar magic.