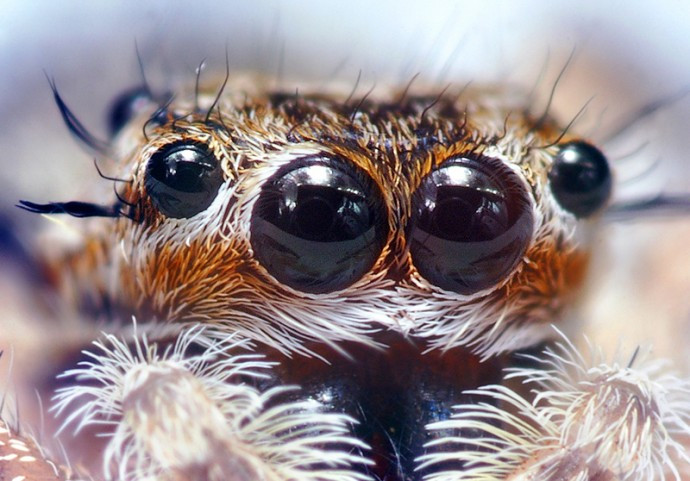 Welcome to another edition of THAT’S METAL!, in which we collect photos, videos, and news reports about things that are metal, even though they don’t involve metal music. Today, we have a whopping nine items for you.

We’ll start with a pair of items from the natural world, and I’m not talking simply about the pair of eyes that are gazing hungrily at you from the photo at the top of this post. That alien-looking fucker is Phidippus pulcherrimus (Salticidae), one of the 5,000 species in a family called the Jumping Spider. And those aren’t all of the Jumping Spider’s eyes. There are two other pairs of eyes on the back of its head, making a total of 8 eyes.

Not surprisingly, The Font of All Human Knowledge reports that “Jumping spiders have some of the best vision among invertebrates and use it in courtship, hunting, and navigation”. Yeah, courtship. They can see a hot piece of spider ass both coming and going. But the main point of this item isn’t the Jumping Spider’s superior ability to check out potential sex partners. No, today we’re talking about predation.

Butterflies are among the prey of Phidippus pulcherrimus, but one species of butterfly has evolved in a way that gives it a unique ability to survive attacks by the Jumping Spider.

That species is named Calycopis cecrops (Lycaenidae), also known as the hairstreak butterfly. 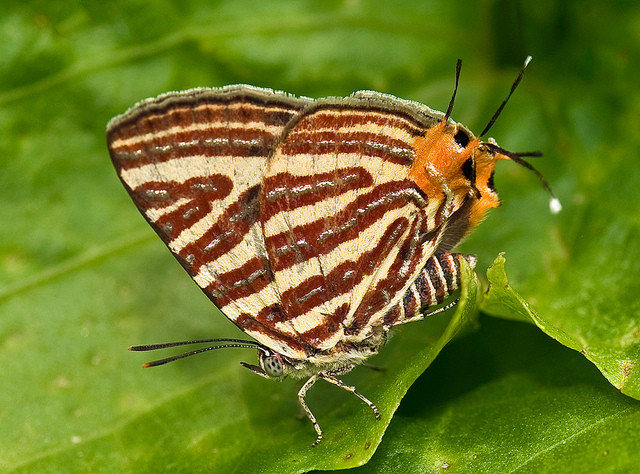 The hairstreak butterfly has a pattern on its hind wings that resembles a second head, as well as “tails” that resemble antennae. A recent study conducted at the Florida Museum of Natural History (described here) shows that the “false head” of the red-banded hairstreak is uniquely successful in deflecting attacks by the Jumping Spider, because Jumping Spiders go for the head — it always attacks there to deliver its venom to the vital center to instantly paralyze the prey.

I don’t know about you, but I’m sure glad Jumping Spiders are the size of spiders instead of semi-trucks. Otherwise, we might have evolved with two heads instead of one, one between our shoulders and one on our asses. Some people have their heads up their asses, of course, but that’s not an evolutionarily advantageous trait.

Here’s another item from the natural world. Not much mystery why this is metal. 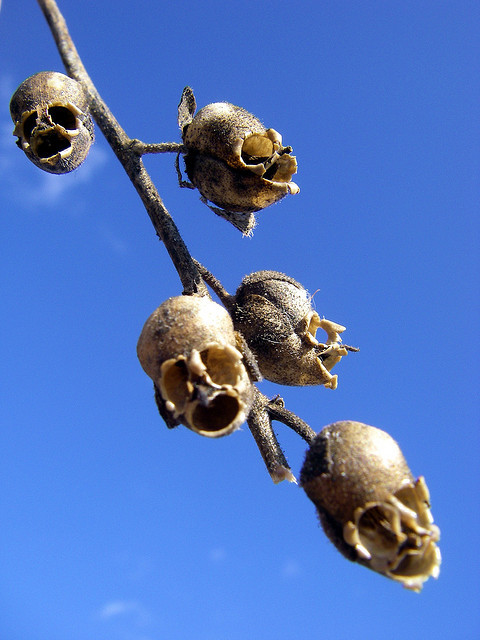 This is what happens when the the snapdragon flower dies, leaving behind a seed pod. A dragon’s head when alive, a skull when it dies. That’s a goddamned metal flower.

This next video is metal on many levels, and they all pretty much add up to “insane”. This is a clip from an IMAX documentary called “Straight Up”. It shows some dudes inspecting 500,000 volt power lines, up close and personal. The electrical arcing you’ll see between the line and the helicopter is being done to equalize the voltage potential of the two. I don’t know what this means or why it’s important, though I assume it has something to do with not being fried to a fuckin’ crisp.

Appropriate YouTube comment: “I don’t know that helicopter gets off the ground with the weight of those massive steel balls those two men have.”

Coincidentally, not long after I saw that power-line video I found a web page that collects fifty years of vintage workplace safety posters from The Netherlands. This one seemed relevant: 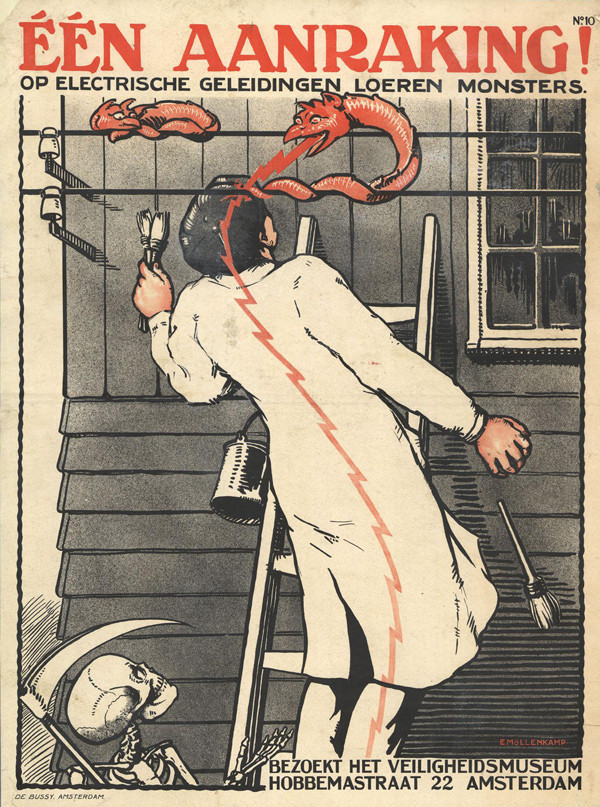 I liked these, too. Brutal. It’s too bad that workplace safety posters in the modern era have become so drab — which is why no one ever pays any attention to them. 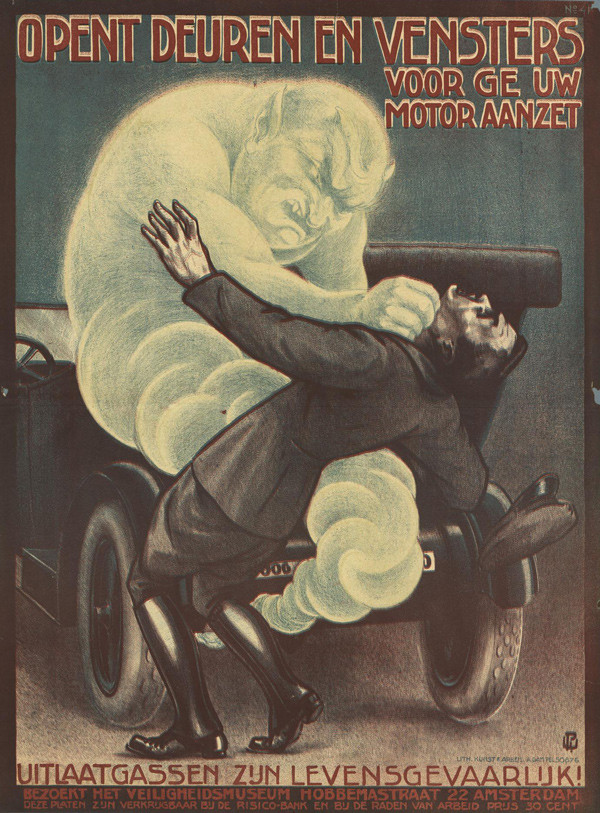 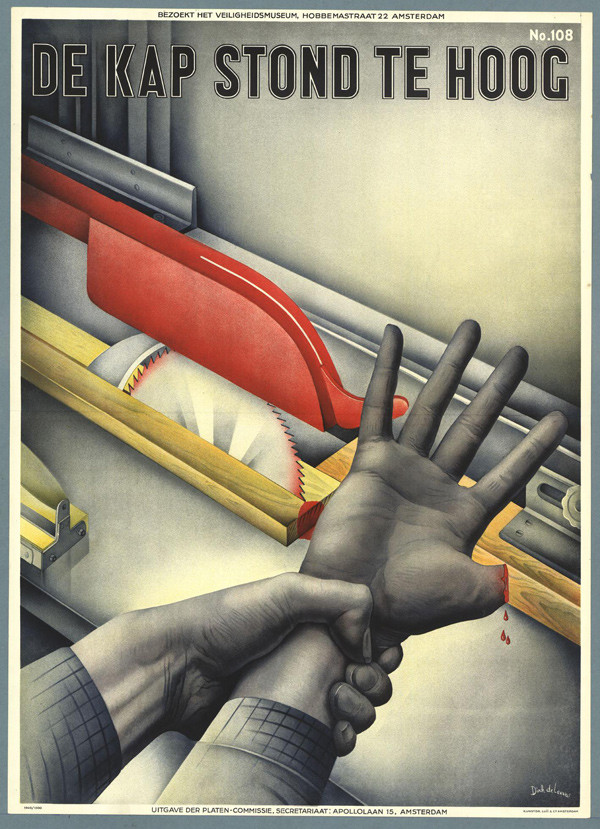 More can be found here.

While we’re still thinking about the subject of people who do insane things for their work, here’s a video of a Colorado farmer named Eric Howard digging a fire line on July 8, 2013, to stop a fire that was threatening to engulf an 80-acre hayfield. Using his John Deere tractor.

In answer to people who thought it was nuts for this dude to risk his life over hay, I quote the comment from Phro, who posted a link to this on his FB page: “I like that people are arguing about the pros and cons. They clearly have never met a farmer.”

Time for some metal sporting activities. The next video shows Norwegian/Italian wingsuit athlete Alexander Polli flying through a narrow opening in a rock formation in the Roca Foradada Mountains of Montserrat, Spain. He reaches speeds of 155 mph (250 km/h). Also, he initiates the flight by jumping from a helicopter. It’s a sphincter-tightening thing to see.

In my personal dictionary, “metal” not only means “brutal”, “filthy”, “unconventional”, and “generally awe-inspiring”, it also means “bizarre” and “ridiculous”, kind of like life itself. Here’s a sporting event that qualifies under the “ridiculous” definition: bubble football from Norway.

Oh those Norwegians, they so cwaaazy.

In the Superman mythos, Krypto was the only dog to survive the destruction of Krypton, and on Earth he became Krypto the Superdog. I thought about Krypto as I watched this next video. You’ll understand why in a minute. I also think Krypto is a better name for the dog than “Jumpy”. Holy shit, this is one amazing canine.

Humans can do tricks, too. We saw a few of them earlier in this post. And here’s one more.

This is a bit of a cheat, because it does involve music — but not metal music. And besides, the music itself isn’t really the metal part of this little performance. This is the Mnozil Brass band from Austria: