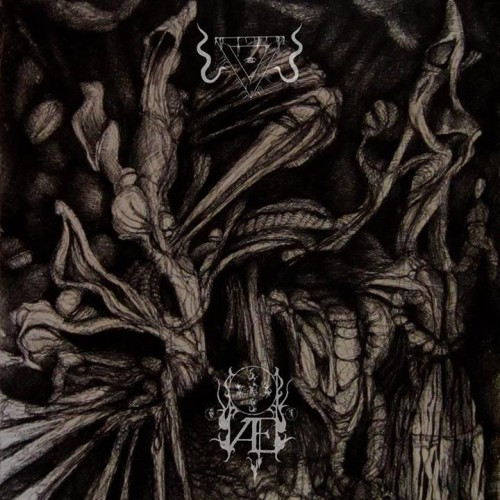 This past weekend I saw two pieces of news concerning the otherworldly black death entity known as Ævangelist, about whom we have written frequently. First, it appears the band have finished recording a new album, Omen Ex Simulacra, which will be released later this year by Debemur Morti. Be afraid. Be very afraid.

Second, I saw that in the coming months an Australian label named Aurora Australis Records will be releasing an Ævangelist split with a Philadelphia black metal band named Esoterica . The artwork for it, created by Ralph Stewart, is displayed at the top of this post. Esoterica will be contributing three songs, including one on which MkM of Antaeus and Aosoth will be making a guest appearance. Ævangelist’s track is called “Omniquity”, and they posted it on YouTube yesterday.

It may only be one track, but that one track is the length of at least an EP: 22 minutes, 21 seconds. It’s a dense, harrowing, atmospheric piece, often violent and always unsettling. Yet for all its destructive power it exerts a strange hypnotic hold on the senses.

It’s as much a storm of experimental black noize as it is a blitzkrieg of alien war metal. Synthesized sounds are used in abundance throughout the song, sometimes simply adding an eerie layer of shimmering ambience and sometimes creating a hurricane of frenzied discordance, so dense and multi-faceted that it’s not possible to pick out all of the sounds and effects. Through much of the song’s second half, which is an unrelenting sonic battlefield, the synth is used to create the intermittent peal of an ancient horn, solitary notes ringing out above the carnage of mechanized combat.

Roughly the first half of the song moves between passages of hammering guitar and bass rhythms, in which the distorted stringed instruments create a moving wall of murky cacophony with an underlying industrial-styled beat, and quieter passages in which the drums take up a more sedate rhythm while the discordant electronic effects continue to make the hair stand up on your neck, like drifting wraiths and slowly writhing tentacles on the move.

But man, that second half of the song is simply a relentless assault on the senses. It’s as if the Great Old Ones had ripped through the inter-dimensional membrane and begun to consume our world in a ravenous display of horrible ferocity. You can still detect a rhythm in the rumbling drums, the crashing cymbals, and the punishing riffs, but you sense them through a distorted, disorienting whirlwind of noise. 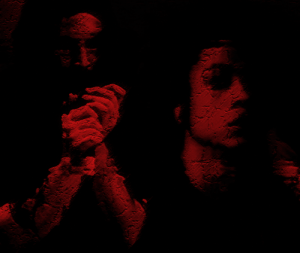 The cold, horrific atmosphere of the music is dreadfully enhanced by the vocals. They come and go, more absent than heard over the song’s length, but they’re inhuman and frightening — a mix of deep leviathan roars, skin-flaying shrieks, and reverberating howls. In the chaos of the song’s back half, they’re layered, with all the extreme vocal variations heard at once, a cacophony of demonic fury and freakish insanity.

There’s really no reprieve. From the ominous foreshadowing of the symphonic intro straight through to the final minute of squalling distortion, “Omniquity” is an unrelenting cascade of doom and catastrophe, permeated with a sense of alien penetration from worlds inhabited by monsters. As a wholly consuming piece of dark, disturbing atmospherics, it’s an impressive achievement. It won’t appeal to a broad base of listeners, that’s for sure, but if you have any taste for blackened death metal, Ævangelist are pushing the genre into unexplored realms, and they must be heard.