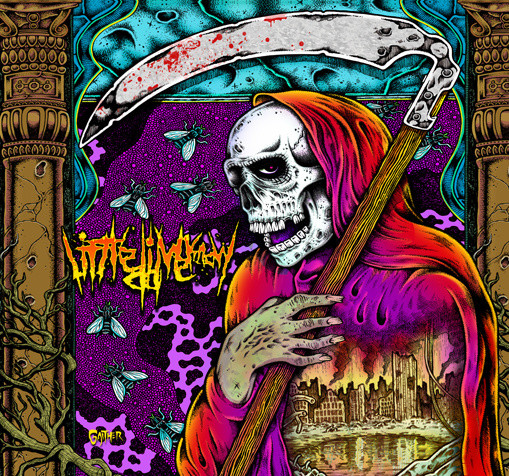 (NCS contributor Austin Weber is back with us, putting the spotlight on a Kentucky band named littledidweknow.)

As any fan of music should know, personal taste is the biggest indicator of what we enjoy. The merits of good and bad are debatable, and so it’s always amused me to see the hordes come out of the woodwork to wield the word “masturbatory” with an unrighteous vengeance. Unfortunately, that subset of metal fans simply don’t understand that music can be technical with a purpose and not just for show.

More then anything, it comes down to songwriting skill, but it’s also a matter of personal preference — how each of us individually perceives the aesthetics (a particular genre/style) of music in relation to why we consider music to be good or bad. For people like me, it’s a matter of enjoying how these bands come up with interesting yet unconventional rhythms and the way in which they often revolve around complex, unique song structures.

Enter littledidweknow, a top-tier local act from my hometown of Louisville, KY. This is nowhere near run-of-the-mill, trying to play a style of local metal. littledidweknow is a band intent on a unique sound not constrained by one genre. Lucid Happenings is the result of a band who have been writing, playing live, and developing over several years, leading to an eclectic, intricate album with nary a moment of filler in its 48-minute run time. The experience of listening is disturbing on so many levels, and only grows better with repeated listens as you take everything in. From start to finish, littledidweknow deliver a sickening, ever-shifting ferocity, bound in technical, non-linear songwriting.

Their sound covers a multitude of styles, and is ingrained with a focus on writing songs that repeat very few parts. This unique compositional route invites comparisons to both Psyopus and Cryptopsy, who are well known for writing songs this way. In fact, in terms of their overall sound, Psyopus-meets-Cryptopsy is a pretty good indicator of what you are getting here. The music is constantly shifting; from complex tapping/sweeps/leads mixed with chugs to slam-oriented pockets, death metal riffs, grind flourishes, instrumental passages, and breakdowns used strategically as pitstops before re-energizing the song and branching to somewhere new.

The guitar-work on Lucid Happenings is, I assure you, on a completely different level than most, and is used to torment your brain, not as “ pointless wank”. The axe-work of left-handed lead guitarist Mike Kruse consistently melts minds and does so in a bizarre frenzy. Rhythm guitarist Brent Allen proves his mettle, metal-shredding alongside Mike and adds plenty of extra leads to the already packed tracks.

For a guitar-oriented album, the warm, fluid bass-playing of Evan Fowler shines through audibly in the mix most of the time.  He truly stands out when playing something different than the guitars, or when the musical natural order is reversed and the bass plays first, followed by the guitars playing a similar part. This happens on tracks like “Adventure At The Music Factory” and part-way through “Candy-Coated-Sugar-Coma”. 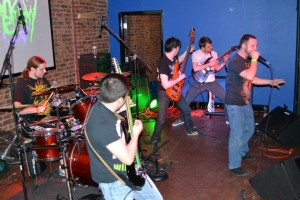 When it comes to death metal vocals, I personally get annoyed at the obvious multiple vocal layers/dual scream & growl layering, over-reliance on effects, and sheer lack of vocal power. Fortunately, littleDidWeKnow have a secret weapon in the form of the world’s greatest metal vocalist, William Sullivan. I can tell you for a fact that this album has no studio-enhanced vocals, and on top of it delivering pure vocal beef, it was recorded when he had bronchitis.

His range covers a wide variety, from demonic deep growls to sloppy burps and squeals, death-metal-fueled low howls, a raspy high, and a wide variety of pteradactyl and velociraptor screams. His approach reminds me frequently of Joe Horvath from Circle Of Dead Children, not only in his diversity but also in how he obviously tries to explore his voice by coming up with new sounds and vocal patterns.

All the songs are a rapidly shifting blur in need of multiple listens, which makes the average song length of 4 minutes a healthy trend. The longest, 8-minute epic “Magmarilloatia In Tabor City”, starts with a low deep howl before a bass break and furious drums, with back-and-forth riffing, until they take you to a hypnotic tapped reprieve followed by a groovy slam pocket followed by a breakdown. Haunting keys in the background add ambience to this slow pause, until of course the song shifts into light speed, unleashing another flood of fretboard wizardy and chugs, accompanied by sloppy, mouth-breathing roars.

From there the song ratchets up the intensity even further until you feel as if you are some small insignificant object being thrown around by the sheer rage exuded by this frenzied force of indomitable insanity. Then there is another calm build-up, followed by an evocative instrumental pause, bringing to mind a desolate plain. If there is a transition in a littledidweknow song, it usually means they are gearing up for something insane, and that’s exactly what they unveil after the instrumental break. After this final demented fury, the song transitions into an Inception-style breakdown within a extended breakdown until the song fades away.

They cram so much into every track, there is no point in me repeating what I just wrote above for all the other tracks. That was me being very annotated and brief in an effort to describe a dense monstrous song. Even their shorter songs carry just as many violent shifts, and all shun the concept of verse-chorus-verse. 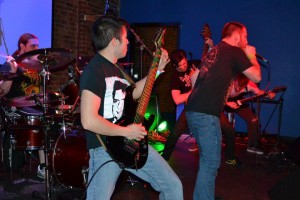 Lucid Happenings is not your average album. It’s so full of non-repeated parts that it takes a number of listens to fully sink in and make sense of. The tracks twist and turn frequently, which is (again) why I chose not to do a track-by-track review. This is definitely not the kind of music you turn on for 60 seconds and make a rash judgement about. It’s complicated, ever-shifting music. Give it a chance to develop and see where the songs go.

in Lucid Happenings, littledidweknow have crafted a well-composed affair, each track violently throttling the listener in a chopped-up delivery of mercilessly pissed-off metal. But while that is what they primarily do in their instrumental passages, frequent build-ups and several songs with slower beginnings bring a different tempo and variety to the album’s usual whirlwind approach.

Lastly, for full ethical disclosure I will admit I am roommates with littledidweknow’s vocalist William Sullivan.