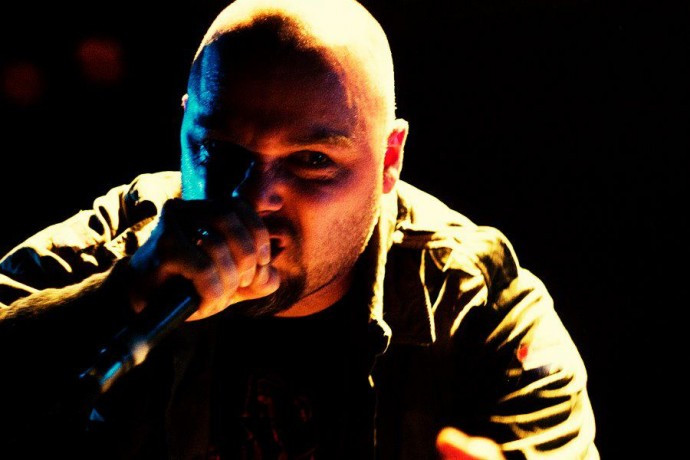 (NCS contributor and hard-man-to-please KevinP interviewed Mike van Mastrigt, and this is Part 1 of the interview. Stay tuned for Part 2, which includes an announcement you really won’t want to miss.)

K:  Let’s go back in history for a moment. You were in Sinister, left in 1996 after the Bastard Saints EP. Why?

M:  It was time to move on…. I was busy with too many things.  Next to being the frontman, spokesman, I also was the band manager/tour manager and booker. That all was to much and it took away the focus and correct spirit.  I needed a break. So there was no option but to quit.

K:  You started up rather quickly (only a year later) in 1997 forming Houwitser. Were the batteries recharged that soon?

M:  I didn’t start Houwitser. I was the singer and only the singer, until they would find someone else. Also, I made the album cover and booklet.  I did no arrangements for shows, etc.

K:  So when you joined,  it was known to be a temporary thing until they could find a more permanent vocalist?

K:  Coming back to Sinister for a moment, in 2001 Rachel joined the band as the vocalist, who you then later married. Did you know her before she joined Sinister. How did that all come about?

M:  Rachel and I already have known each other for 25 years. We have done some shows together when she was in Occult. It was I who came up to have her as my replacement. At first she helped them out for the Possessed Tribute album cover song.  I could not do that because I was doing a Possessed song with Houwitser. At first the guys of Sinister did not want a female vocalist.

M:  I had been in a band called DSR (Death Squad Rotterdam) but that was for fun only.  Those guys didn’t have the experiance and drive I had when it came to making music. Later,  I formed Division666.  That was a very promising line up with Eric (ex Sinister/Destroyer 666) on drums, Nils (Disavowed) on bass. We had very good, brutal and intense songs.  But the day I unleashed the website, the guitarist started a fight, so we quit. Than I had a break of about 3 years untill I rejoined Houwitser.

M:  Because Stanley [Blonk] left.  I had already recorded one song with them on the last album and did guest vocals at some live shows.  Being on stage gave me the right feeling again, so I wanted more.  When Stanley left,  Michel [Alderliefsten] asked me back (even though he thought I wouldn’t do it).

K:  I see you have done a bunch of shows, since rejoining (Russia included), how did those work out?

M:  Russia was realy cool to do. -30 is fucking cold.  It was this past winter with a lot of snow, but a great experiance.  Moscow was a very good show, the organizer even released a live Dvd of it, “Moscow Atrocity”.

M:  We are working on the 6th album. We have 10 songs, 4 are totally finished.  We have recorded them as a demo to send to labels. The music will be different because most of the guitar parts are written by Richard [Gielen] this time.  Marten and I had a big part in arranging the songs. It’s still Houwitser, some songs are more brutal then before, others will have a diverent vibe because I’m changing my vocal style.

K:  Vocally, will this be more like what people are used to hearing on the old Sinister albums?

M:  Yes and no.  Some songs you can directly pick out my vocals and they will sound like the old Sinister.  But Houwitser is not Sinister and it gives me the opportunity to experiment.

K:  Michel normally writes most of the music, but you said Richard is handling most of it this time around. Why?

M:  Richard wrote a lot on the last one as well. Michel has lost his “mojo”. We are pushing him to come up with riffs, for he is the one who invented Houwitser. Marten and I even wrote a song on drums and gave it to him so he could write the guitar parts.  We told him what we wanted and he delivered!  Richard is a good and creative guitarist and came up with some great riffs, which will lay the foundation for a great new record.

K:  You said you were label shopping right now, any feedback? Think the album will be released this year?

M:  We have had some feedback. They like it, but we’re not the band they are looking for or didn’t want a new band at that time. Hopefully we will record the album this year.