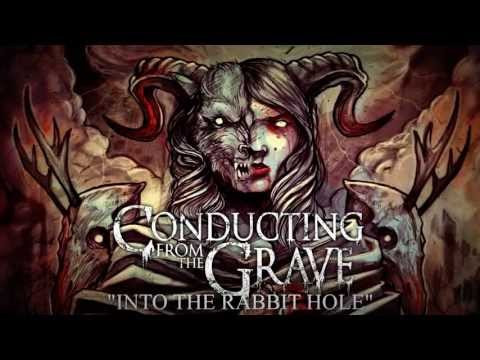 (DGR wrote this feature about a new video from Sacramento’s Conducting From The Grave.)

You may remember that the last time we checked in with the Conducting From The Grave guys, they were neck deep in their kickstarter campaign and had just released a song entitled “Into The Rabbit Hole”. Well, the band succeeded, garnering close to 19k out of the original goal of 15,000 and have since announced that the disc will likely see a late-September/early-October release as they figure out how to get the merchandising side of things taken care of.

A few days ago the band also uploaded a playthrough video of the aforementioned “Into The Rabbit Hole” song that rotates between guitarists Jeff and John and bassist Jordan. I think playthrough videos are interesting as hell because you can really learn how to play a song yourself by studying them, or in my case just rest your head in your hands as you’re reminded you’re not even half the musician that these guys who are just shredding away are. I don’t even play guitar and watching these guys fly along to the song is fascinating.

I have heard bits and pieces of the full self-titled release and it’s a pretty good one to look forward to. It has a metric fuckton more guitar playing than Revenants, so if you missed that element from that disc, it’s back, and hybridized with a much more death-metal focused sound. Until we get more to show off from that disc though, you’ll just have to be satisfied with another take on this song.

2 Responses to “CONDUCTING FROM THE GRAVE: “INTO THE RABBIT HOLE” PLAYTHROUGH”