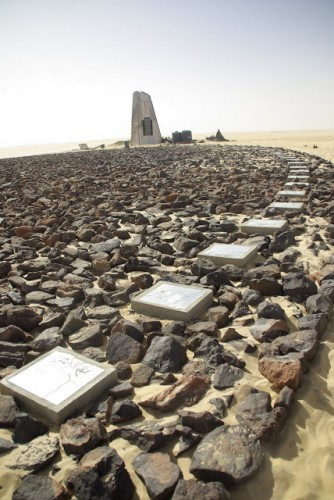 Welcome to another fantabulous edition of THAT’S METAL!, in which we collect images, videos, and news items about things we think are metal, even though they’re not music (or at least not metal music). We have eight wide-ranging items for you today.

We start with the image you see above. The story behind it, and more complete photos of what you’re seeing, are stunning. There’s no other word for it.

On Tuesday, September 19th, 1989, UTA Flight 772 was scheduled to fly from Brazzaville in the Republic of Congo to Paris CDG airport in France. En route, the aircraft exploded over Niger in the Tenere region of the Sahara Desert, which is one of the most inaccessible places on the planet. French investigators determined that a suitcase bomb planted by Libyan terrorists caused the disaster. All 170 people on board died.

Eighteen years later, in May and June 2007, families of the victims gathered at the crash site to build a memorial, funded in part by the $170 million compensation package eventually provided by the Libyan government. It took two months to build, using hand-placed stones trucked to the site from over 70 km away.

170 broken mirrors, each one representing a victim, were placed around the circumference of the memorial. One one side of the memorial, which you can see above, the starboard wing of the downed aircraft was erected in the sand. It was trucked to the site from 10 miles away after workers dug up the wing and emptied it of sand. A plaque bearing the names of the victims was attached to the wing before it was put in place. 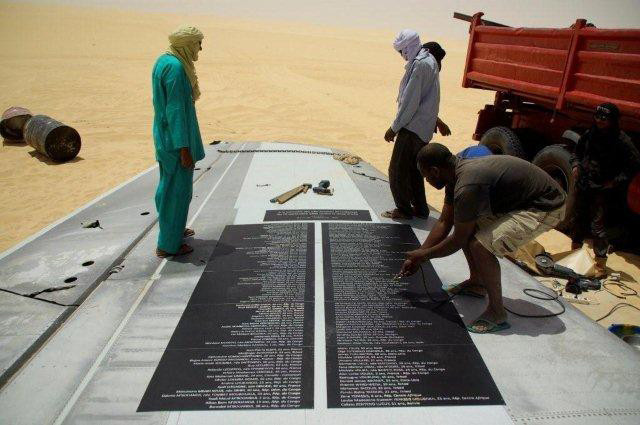 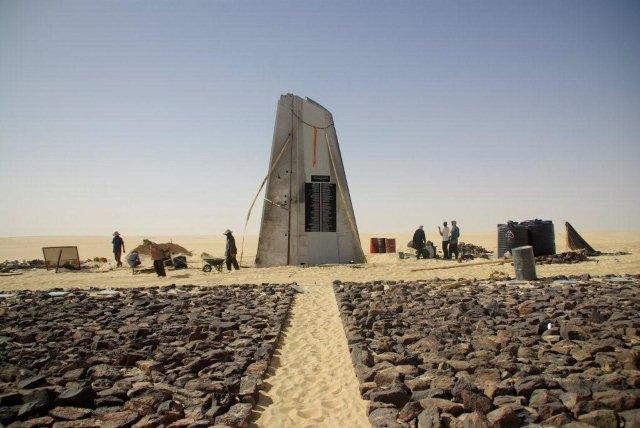 From ground level, it’s clear that the stones have been laid out in a design, but the purpose is not entirely clear. 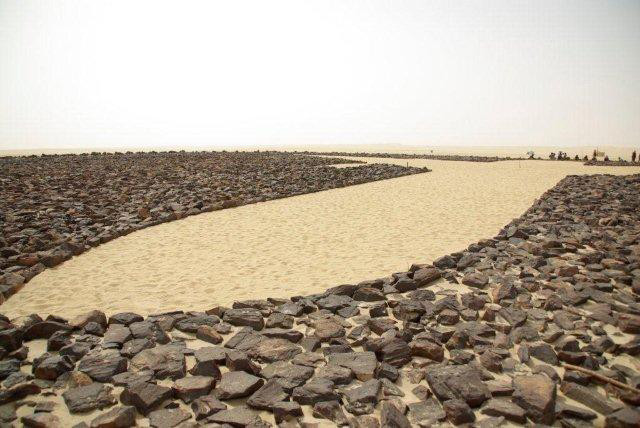 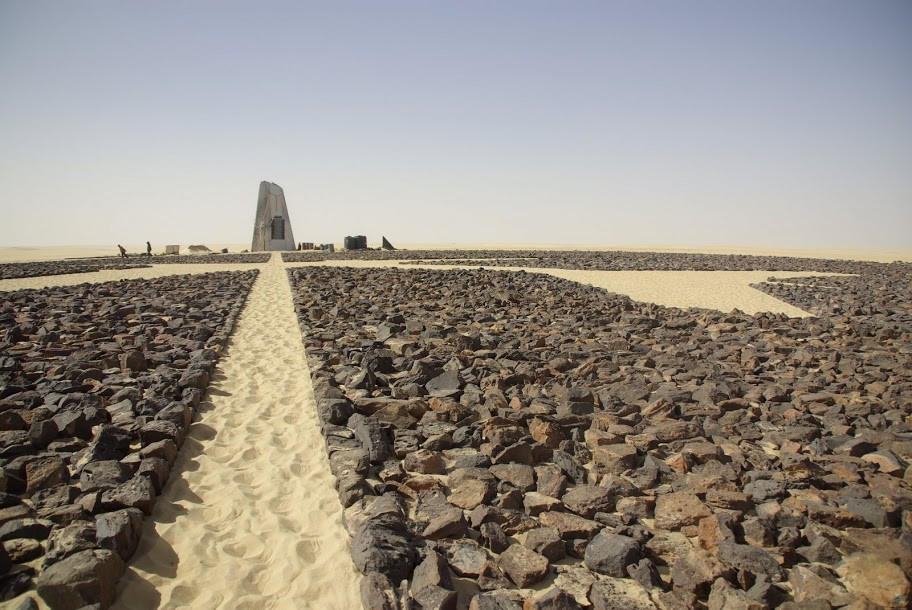 Only from the sky can you see the full image of the memorial, and it’s amazing. The last two images below are satellite photos obtained from Google Earth. 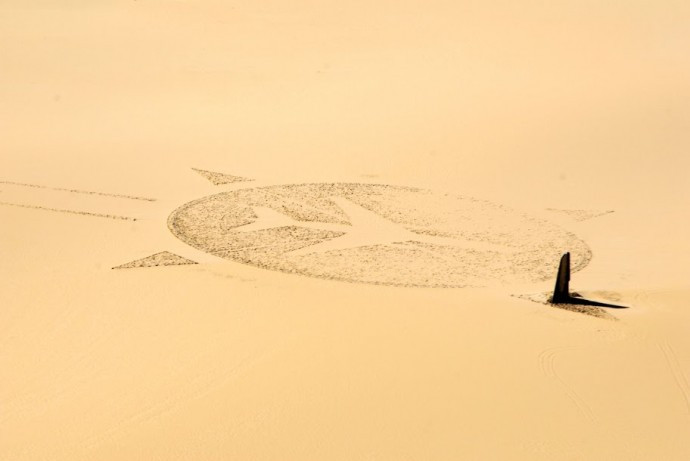 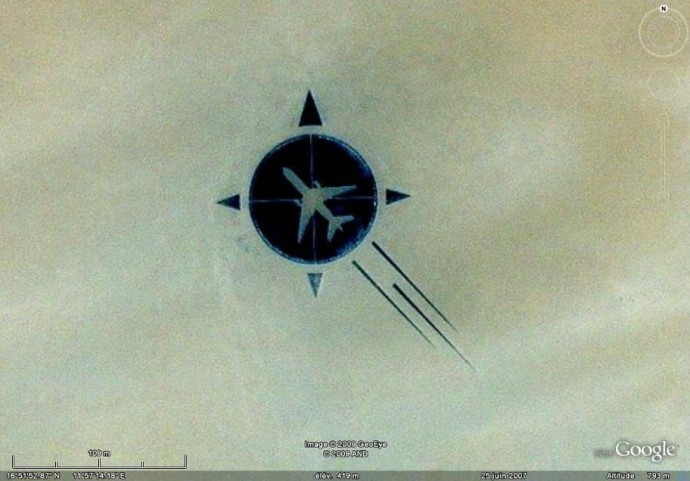 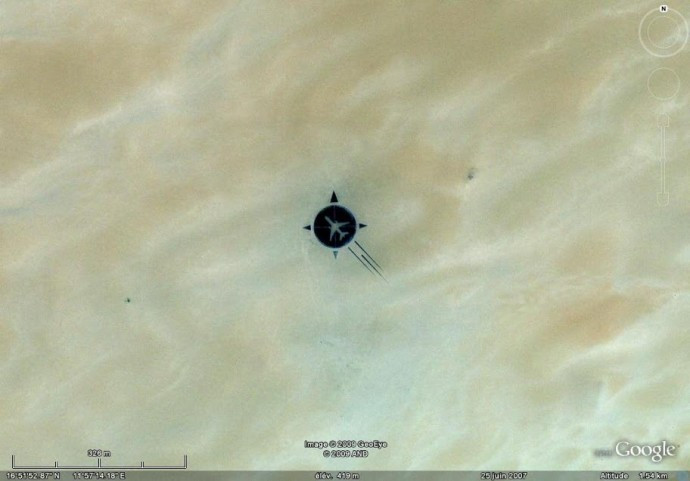 This is both mind-blowing and quite moving.

I’ve truncated the full collection of photos showing the memorial’s construction, but I recommend you go here to see them. 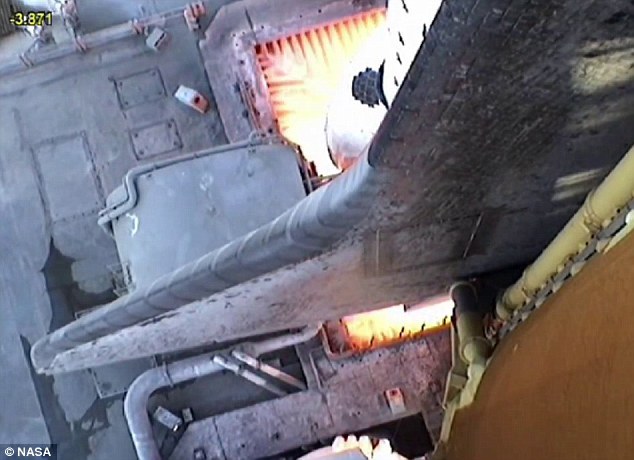 Speaking of things seen from space (how’s that for a transition?), we turn next to the following video. Like the immediately preceding item, it falls into the category of things that are metal because they’re jaw-droppingly awesome.

This is video shot in high definition by cameras mounted on the Solid Rocket Boosters that carried NASA space shuttles into orbit. You get a bird’s-eye view of the entire trip, from the rocket’s launch to the booster’s descent back into the atmosphere and ultimately into the ocean. What makes the video even more cool is the sound, which was remastered by Skywalker Sound, the film post-production company founded by George Lucas.

Those rapidly flying numbers you’ll see in the upper right-hand corner are the rocket’s airspeed.

(thanks to Andy Synn for the tip on this video) 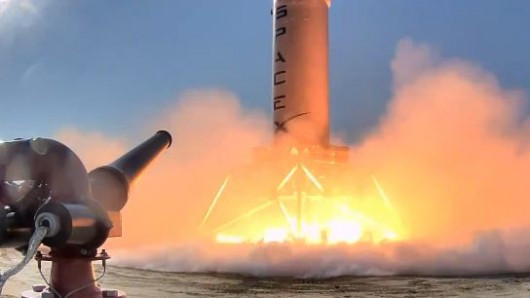 The next video is kind of connected to that last one, though it’s much shorter. This film shows the Grasshopper, a 10-story Vertical Takeoff Vertical Landing (VTVL) vehicle designed to test the technologies needed to return a rocket back to Earth intact. According to the information accompanying the video, “while most rockets are designed to burn up on atmosphere reentry, SpaceX rockets are being designed not only to withstand reentry, but also to return to the launch pad for a vertical landing. The Grasshopper VTVL vehicle represents a critical step towards this goal.”

For this test, the first of its kind, the rocket reached a height of 1066 feet (325 m) before descending.

This is a photo of a spider wearing a droplet of water for a hat: 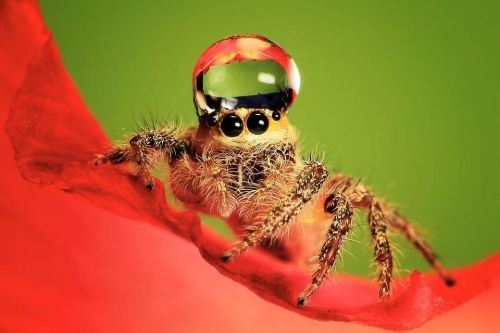 Okay, I hear you. You don’t think that’s metal. I’m not sure I do either, though it’s definitely hilarious. There are a bunch more photos just like that one here (I found this link via Eric Y). So, maybe this video of a jumping spider is metal?

I guess you’re right: that’s not really metal either. But I think this proves that cats and jumping spiders had a common evolutionary ancestor. They then branched off to develop different adaptive traits to enhance their survival, with cats having 9 lives and jumping spiders having 8 eyes. Humans developed laser pointers to control them both.

And that’s what’s metal about this item: my own significant discoveries about the evolution of cats, spiders, and humans. Besides, since that’s a jumping spider in the video and in the hat photo, this links up nicely with the first image in the last edition of THAT’S METAL!. So there.

Okay, since we’ve now gone deep into the realms of hard science (how’s that for a transition?), let’s stay there with this video about what happens when you apply heat to ammonium dichromate and mercury thiocyanate. Yeah, motherfuckers: a chemical kraken (wait for it).

While I’m thinking about krakens, let’s have a look at some other giants from the deep (how’s that for a transition?). In this video, which appeared last month, some divers at the Souza Rock area off the central California coast have a close encounter with a pair of humpback whales. They can probably tell you what it’s like to shit yourself in a wet suit.

Despite the title of the video, humpback whales don’t eat people. According to The Font of All Human Knowledge, their diet consists mainly of krill and small fish, and they have an interesting feeding technique that seems to fit exactly what that video showed:

“The humpback has the most diverse feeding repertoire of all baleen whales. Its most inventive technique is known as bubble net feeding; a group of whales swims in a shrinking circle blowing bubbles below a school of prey. The shrinking ring of bubbles encircles the school and confines it in an ever-smaller cylinder. This ring can begin at up to 30 metres (98 ft) in diameter and involve the cooperation of a dozen animals. Using a crittercam attached to a whale’s back, some whales were found to blow the bubbles, some dive deeper to drive fish toward the surface, and others herd prey into the net by vocalizing. The whales then suddenly swim upward through the “net”, mouths agape, swallowing thousands of fish in one gulp. Plated grooves in the whale’s mouth allow the creature to easily drain all the water initially taken in.”

(Thanks to Raven S. for the link to the video.)

Credit to Raven S. for the tip to this next item, too. This video has rapidly made the rounds on the interwebz, with nearly 4.5 million hits in about two weeks. But just in case you missed it, I’m sticking it in here, because it’s definitely metal.

This is a drum solo performed by a woman named Mary at the Coalition Drum Shop in La Crosse, Wisconsin. After first seeing it, I swapped messages with Dustin at the shop to try to learn more about this lady — because this definitely looks like more than a late-life hobby — and he responded that they would be uploading a video interview that would give more information about who Mary is and how she learned to play like this. In the meantime, they’ve uploaded an encore performance, which you’ll find right after the original one: 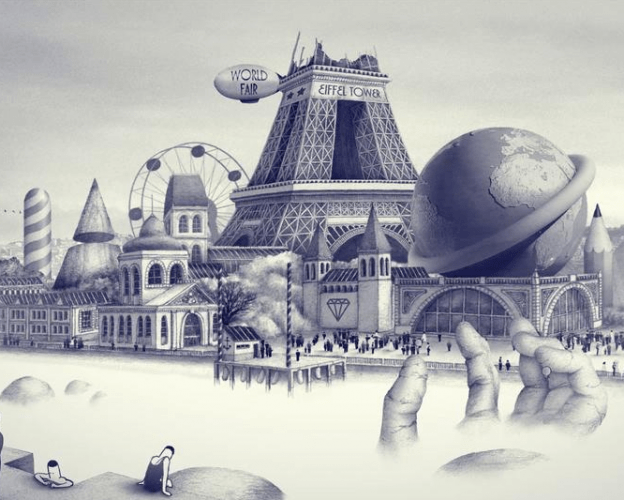 Our last item is a music video, but it’s not the music that’s metal, it’s the animation.

The music is a song called “Rock It For Me” from a new album named Panic by Caravan Palace, a French electro-swing and Gypsy jazz band. The song is jumpin’, but the animation is the main draw for moi. It was co-directed by Guillaume Cassuto, Ugo Gattoni, and Jeremy Pires (aka CRCR). The video takes place at the World’s Fair in Paris during which aliens mount an invasion with enormous beach balls. The government decides to strike back with a giant robot and . . . you can see for yourself what happens after that.

Rock It For Me – Clip from Caravan Palace on Vimeo.