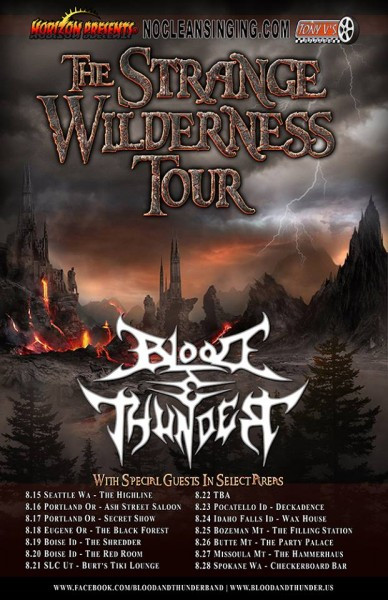 Here’s my almost daily collection of news and new music that I’d like to recommend for your edification and enjoyment.

The first item involves Blood and Thunder, a Seattle-area band who I’ve written about repeatedly, going all the way back to the first time I saw them perform live back in April 2010. They’re about to embark on their first Northwest regional tour. The sharp-eyed among you will see our name on the tour flyer at the top of this post, and yes indeed, we’re proud to help sponsor this adventure.

That’s not something we do very often, but I wanted to help spread the word in this instance not only because I like B&T’s music a lot, but also because I’ve gotten to know some of the guys in the band, and I’ve seen firsthand how hard (and how persistently) they’ve worked to get to this point. It has been a totally DIY effort, and it hasn’t been easy. But they now have quite a long and impressive list of national and international bands for whom they’ve opened in Seattle, in addition to their own headlining appearances, and it’s time for them to take their show on the road.

There are stories like this one in every city, but this just happens to be one I’ve watched develop, firsthand, over a period of more than three years. So hell yes, I want to help.

The music, of course, is what matters the most, and I can testify from having seen them perform frequently in Seattle that they can be counted on to deliver a killer set. Their music is a high-energy form of guitar-and-keyboard-driven melodic death metal with pagan/folk elements, and it will get your blood thundering.

Here are the tour dates, and below that you will find a full stream of their latest album, A Reality In Ruins (their other releases can be streamed in full here and they’re available on Bandcamp at this location). If you’re within striking distance of any of the tour stops, do yourself a favor and go rage with these dudes.

I came across this Nottingham, England band back in April 2012 when I heard their EP Traces. As I wrote in my review at that time, the doom-influenced melodic death metal they created had a powerful effect on me. And today I’m very happy to report that they’ve completed recording a full-length album which they’ve titled By Darkness Undone — and that they’ve released a lyric video for its opening song, “The Dry Land”.

Since the time I heard and praised Traces, our own Andy Synn stepped in as the band’s new vocalist (while remaining as the vocalist for Bloodguard), and he really stretches his vocal talents on this new song, moving from clean vocals to deep, harsh roars to the kind of scarring shrieks that’s often associated with black metal. I think he does a great job, though you’ll obviously have to take those sentiments with a grain of salt since he’s a friend and a fixture here at NCS.

Musically, the song itself is excellent, too, with both a beautiful melody and a bridge-collapsing heaviness. It’s drenched in doom and shrouded in melancholy, and it’s powerful and memorable. But listen for yourselves. (Twilight’s Embrace are exploring release options, so I don’t yet have a release date for the album.) 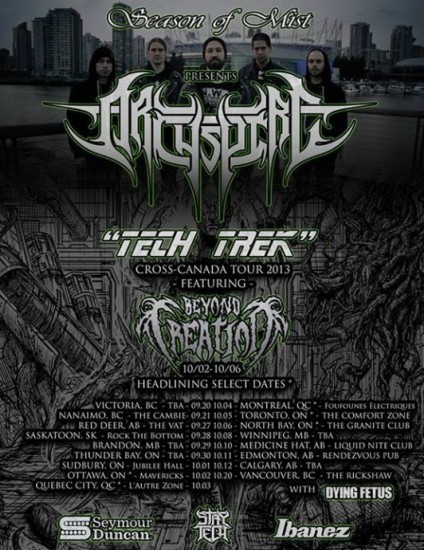 To round off this post, here’s a news item about still two more bands I’ve been following for a while — Archspire from Vancouver, BC, and Beyond Creation from Montréal, Québec. Both of them are excellent, and the latest news is that Archspire will be mounting a cross-Canada tour this fall and will be joined by Beyond Creation as the headliner on select Ontario dates.

When I started following both bands, they were unsigned, but they’re now both with Season of Mist. Archspire are recording their first album for SoM now, and Beyond Creation’s wonderful Aura album was re-released by SoM in May (reviewed here).

The tour dates are below, and after that I’ve included some music from both bands as a reminder of why they’re worth watching.

6 Responses to “SEEN AND HEARD: BLOOD AND THUNDER, TWILIGHT’S EMBRACE, ARCHSPIRE, BEYOND CREATION”