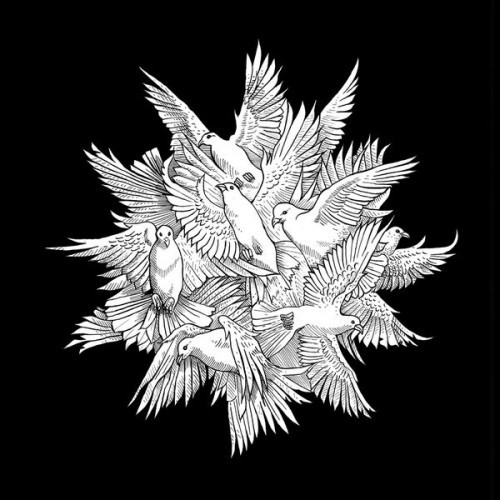 Like isolated wildflowers dotting a mountain meadow in early spring, one-man bands are scattered across the world of metal. Largely obscure, they chase their own visions or simply follow the foosteps of others to prove to themselves that they can. Creating music that more than a few handfuls of people want to hear is rare; in many cases, that isn’t even on the agenda.

I haven’t done anything like a  comprehensive study, but my sense is that there are more one-man projects in black metal than in most metal genres. Maybe it’s something about the purity of obscurity that seems to be one of black metal’s organizing principles — the fewer people who listen, the better. Or maybe it’s just easy enough to set the drum program on “blast” and let it run, while thrashing a repeating mass of tremolo chords and screaming like your throat is being slit, and dousing everything with distortion, of course.

There’s actually a lot to be said for that approach, if it’s filled with a genuine spirit of bloody rebellion, but it may not make the listener think twice after the initial adrenaline rush has spent itself. To create something that has a lasting impact? That requires a special talent, which is what Germany’s Fyrnask shows in spades on the band’s second album, Eldir Nótt.

Musical ingenuity comes in so many different forms. A compelling riff, one that takes you forcibly by the neck, is one example, and there are some of those on this album. But for the most part this is a deeply atmospheric work, and one whose ingenuity is considerably more complex and impressive.

When I listened to it the first time, straight through, I wasn’t thinking about the effort that must have gone into its creation. My mind was too busy being swallowed whole by the experience, sucked into its pull like a stray meteorite passing too close to a powerful gravity well, or a fishing boat caught in a whirlpool twice its size.

The second time through I was (barely) able to be an observer as well as a participant, and I wondered about how the album must have been conceived. Was there a master plan from the beginning, or did it start as an outline of chords, with the creator thinking, “it would sound better if I add THIS, and THIS, and THIS!”?

The music is incredibly varied and densely textured, making use not only of the usual metal gear but also a variety of traditional instruments (including acoustic guitar, strings, and what sound like hand drums and hammered dulcimer). In addition to paralyzing acid shrieks, the vocals frequently include the prolonged tones of choral voices, ghostly whispers, and a faint clean baritone. Fyrnask’s alter ego Fyrnd also makes extensive use of synthesizers and assorted electronic noises, and yes, much of the music is shrouded in distortion. 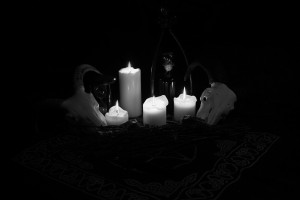 The songs include explosive storms of ripping black metal fury, propelled by blasting percussion and huge walls of scything guitars. Sometimes dense, bleak tremolo melodies swell like oceanic tides through the maelstrom, and sometimes it’s simply an inferno of sound. But the storms break, and the destructiveness is replaced by subdued, often eerie atmospheric passages marked by the interplay of acoustic instruments and synthesizer effects, with choral voices rising in the background and occasional folk/pagan melodies (as in “Sút”) striking a contrast with the harrowing assaults that come before and after. Every now and then, in the middle of “Saltrian” and at times in “Siaidha” for example, Fyrnask even shifts gears into powerful driving riffs that will snap necks.

I don’t mean to suggest that you won’t get a lot out of the tracks if you hear them in isolation, but this really is an album that you should start and just let it run for its full 56-minute length. It tells a story, one that you’ll write in your own mind, a collaboration between you and Fyrnask. Every listener will imagine something different, but all the stories will probably be set in a frigid place that will put an ache in your bones, a place beyond the harness of “civilization”. There will be conflict and tragedy, combat and death, loneliness and loss, the horror of the void and even a kind of spiritual beauty.

Eldir Nótt is a hugely ambitious, painstaking constructed album that succeeds brilliantly. Considering that it’s the work of one man, I’d go so far as to call it astonishing.

A few more notes: “Eldir Nótt” literally means “Nightfire” or “Ablaze the night” and can also be translated to “dawn”. The album cover was created by Benjamin Vierling. The album will be released by Temple of Torturous on September 23.

Below you will find a trailer for the album that will give you a sense of the slower, atmospheric parts of the album (the actors in the video are not connected to the band, btw), and then below that you can hear the song “Vigil”, which premiered on the DECIBEL website.