Afgrund’s Corporatocracy EP comes from an interesting realm of music. Sparing the full grind history lesson, Afgrund have long been making noise as the part of grind that shares more DNA with death metal than it initially displayed. 2012’s The Age Of Dumb was a compact bit of fury born of absolute hatred and disgust. It displayed many older influences of modern grind’s roots as well, from the punk riffs to the political consciousness, in addition to the more modern aspects of death metal that have been slowly working their way into the genre – including the excellent hybrid that has become known as deathgrind.

Grind has oft been a difficult genre to define (and likewise, I could not even begin to purport to be an expert on it based on nothing more than the occasional cursory glance) because if you ask some, the very definition of what it is now is conflicted, without any understanding of what the “grind” actually was in the music. Some bands took to the rapid sense of speed. Other bands then brought in many punk influences and added it to the music (its short songwriting existing as an almost blatant Fuck You! to conventional songwriting) and began to incorporate activism as well.

Somewhere along the line, many bands eschewed the sort of social  consciousness that had long been part of grind, owing in part to its roots in punk music, not even forgetting the massive influence of bands like Napalm Death and Discharge in this scene. Instead, some bands became almost nihilistic – focusing on the fact that the world is a mess and being angry about how fucked up it is, offering no solution, instead surrendering what little aid the logical brain could offer and appealing entirely to emotion, the raw blast furnace of anger and rage giving birth to bite-sized bits of death metal drumming buried behind a wall of simplistic circle pit riffs and someone screaming at the top of their lungs. 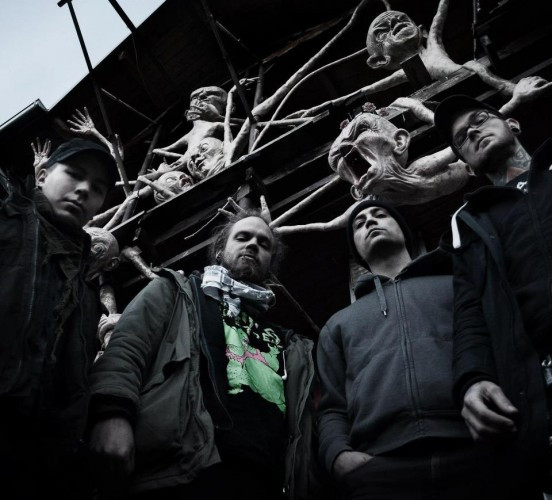 Many bands have morphed into an amalgamation of all of those elements, and Afgrund are one of them, a band who have declared that the world is a complete wreck and that you should be pissed off about it. Corporatocracy is a continuation of The Age Of Dumb and is their latest statement about why you should be pissed.

The EP begins with a somewhat hokey rant in the title track about the dangers of visiting McDonald’s – before falling into what really boils down to something that feels like a twenty-minute song with very few hard stops. Each song is around two minutes in length with the exceptions of “Common Goals” and “Pharmageddon”, both of which reach the almost stoner-doom length of two minutes and almost three minutes. To counteract such indulgences Afgrund also insert some short tracks like the personal highlight of “Earthrape”, coming in at a slim fifty-nine seconds.

“Earthrape” is a continuation of the smash-and-grab that takes place in the title song but makes the one guitar riff much easier to circle pit to; then they obscure all of it by burying it in a wall of blast-beats. However, the moment when the band ask “What Will We Leave?” and continue on for four lines describing the desolation humanity creates before yelling “Nothing more than a world of Shit!” is such a well-done effusion of anger that it defines the song. It also has one of the few really hard stops instead of blurring into other tracks.

Corporatocracy seems to be built out of shout choruses though; every other song seems to have a build-up like “Earthrape”. “Pharmageddon” should likely appeal to a bunch of Misery Index fans, since that one veers very close to Heirs To Thievery territory. It’s one of the more composed songs on the disc, and since it is three minutes long the songwriting is a bit more conventional. It’s still a song that burns white-hot with rage – although to be blunt, all of Corporatocracy does so, you could probably see it from space – and the song spills over into a pretty cool groove in the tune “Satanic Sativa”.

Since Corporatocracy was initially an EP, the band have seen fit to include three cover songs on top of the eight tracks that were already there, which actually turns this release into something close to a full CD if not for its short run time. The three songs are covers of “Splattered Cadavers” by Repulsion, “Shadows” by Nasum, and “The Nightmare Continues” by Discharge. The Afgrund approach to these songs is pretty simple and falls in line with the rest of the CD. They crank the speed up to as fast as they can get it without the song falling apart and then screech over the top.

The Nasum cover is actually a little older because it appeared on a tribute to Nasum disc, so there is a sudden vocal shift that starts with the Repulsion cover and continues through the Discharge one. It’s somewhat jarring since the earlier part of the disc has some mid-range yelling but very little of the high screaming that defines these three songs. These songs are just a bonus, though, and the band play it relatively straight, outside of the apparent Afgrund trademark of doing things incredibly fast. The Nasum cover in particular is very good, but “Shadows” is a really good song to begin with. I, however, am a slave to that song, so I will take “Shadows” wherever I can get it, and using it to bookend a good EP is a perfectly fine approach.

The only issue I have with Corporatocracy lies in the fact that it doesn’t quite distinguish itself as much as I would’ve liked, especially from last year’s The Age Of Dumb. The songs sound like they were written around the same time as that album, so it feels a bit like too much, too fast, and it suffers a bit from the tunes blurring together. The twenty minutes present are quality, violent songs, and Afgrund have a knack for the sort of riffs that will whirl a crowd into an absolute frenzy. However, even at twenty minutes, sometimes you still get lost in understanding what song you’re on, so you wind up with a double-edged sword. Sometimes, it’s easy to just let this release spin and spin, and it never loses its ability to expel energy into the listener. Other times though, you wonder if some of the songs are a little faceless up front and can’t help but question what all the yelling is actually about.

Afrgund are great at the punchy sort of three-word-sentence lyrics that make messages super-easy to convey. Though the messages conveyed are relatively common, Afgrund are beyond the pale of being pissed off and now forcing you to be pissed off, too. Corporatocracy feels like a face-value disc, where every hand is played right up front, with nothing hidden. Afrgund aren’t subtle, and this disc serves as a quick hit to the system, especially as a way of holding you over while waiting for a full proper follow-up to their last full release.

Gym listening? Repeated spinning at work? Way to measure how fucking slow you are at writing a review? Fantastic. Deeper listening for the hidden subtleties of what the band are trying to say? Not so much. This music isn’t built for that though. It’s an adrenaline rush. You’re not supposed to relax to it. It’s twenty minutes, over, out, and done. It is great for that.

They have created an EP that stands up well to a pretty good slate of deathgrind coming along, especially with Mumakil out and a potential Exhale disc on the way, and even a good 48-second punch in the song “Anyx” by Quest Of Aidance. It’s enjoyable for that alone, and you may forget to cut it off before you start to notice that it really has been spinning for a while.