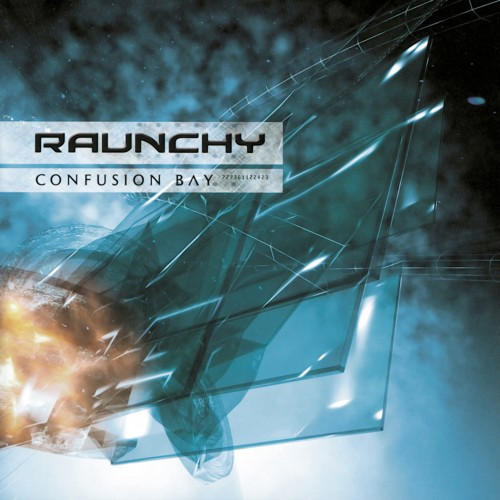 (We all forgot that when DGR joined the NCS staff he was subjected to a mild form of hazing. He, however, did not forget, though he did take his sweet time on the follow-through. This is the second part of a raunchy hazing; the first one can be found here.)

So, fun story: Apparently nobody in our staff remembers giving me this assignment, and all of them seemed pleasantly surprised that I would accept the challenge of such an undertaking. I knew, in one sense, that it would be easier on me than expected because Andy’s and my own musical taste probably share the most in common amongst the NCS dudes, and he seems pretty defensive about his Raunchy. I actually used him a bit as a guide for what to expect on Confusion Bay and he seems pretty passionate about this disc, saying that there’s maybe one song on this one that isn’t awesome.

It is a very noticeable improvement from the group’s debut album, Velvet Noise. Debuts are always a little shaky though, and considering that the guys were founded in the early-to-mid 90’s I imagine putting anything out must’ve been an exciting change of pace after a few demos. One other author had this to contribute to our e-mail thread, though, which was amazing. We were mid-discussion over this release when all of a sudden this gem popped up:

“WHAT FUCKING BAND ARE YOU TALKING ABOUT?”

As you can see, we’re off to a fantastic start.

Confusion Bay – which hit in early 2004 – is, as I imagine it, what people tend to talk about when they describe Raunchy to someone. What little I’ve known of the band seems to be defined by this disc, and for a couple of pretty good reasons.

One is that they later made a frontman switch, from Lars Vognstrup to Kaspar Thomsen, who would become the voice of the band for the back half of the group’s recorded career. He sounds pretty similar, from the tiniest bit of exposure that I’ve had to his recordings with these guys. Confusion Bay seems to be the last thing Lars did with the band, and I’m curious as to what happened that would cause someone to quit months before an album like this was released. Actually, Raunchy have held a remarkably stable lineup throughout their career, with very few position switches. That’s a pretty impressive feat.

Two is that the group signed with Nuclear Blast, and it seems that during the recording of the album in 2003 they had a bigger budget, because Confusion Bay is leagues better produced. It is a wonder what three years of time between discs can do for a band, too, because the songs on Confusion Bay are much more focused and seem more purposeful. They’re not as scattered as those on Velvet Noise and the group really seem to be moving into their sound on this disc. It has proven to be more enjoyable for this here newcomer, too. I wrote the first one of these after four listens to Velvet Noise. With Confusion Bay, I think I’m on the tenth or eleventh. The group are adept as hell as writing hooks in these songs, and while each chorus draws them closer to being a heavy metal pop band, it is working surprisingly well on me here.

Not shocking, though, is that the keyboards assume much greater prominence in the group’s sound now, likely due to the presence of Jeppe Christensen as a full-time member of the band. Combined with the group’s tendency to alternate between guitar riffs that could belong on both melo-death and metalcore albums, Confusion Bay’s heavy key presence reminds me a lot of Sonic Syndicate’s 2005 album Eden Fire (likely the only thing I’ve enjoyed by that band). Both bands must have had some serious overlap in terms of fanbase at the time. I especially enjoy the closing synth line to the song “9-5”; it takes a tune that is pretty alright and makes the last minute really good.

Confusion Bay is, as a whole, more consistent than Velvet Noise. That shows, as the first eight or nine songs have been really good chugging tunes with catchy choruses. They also seem to love the hell out of a couple of the more popular disco swing beats. Other groups have actually started using those right now too, so that chunk of Confusion Bay sounds right in line with the times. However, it seems odd to say this, but once again Raunchy are still capable of throwing a curveball so hard that it causes my neck to snap. This time it’s the song “The Devil”.

That song feels like a tribute to Type O Negative and goth metal in general, and because Raunchy are a little heavier it actually sounds like their take on a Sentenced song as well. It really doesn’t match up with the rest of Confusion Bay, but man, it’s a good song. Actually, a lot of this impression also comes from the immediately preceding title track – which is probably the first time I ever noticed the lyrical content of this disc, with Lars singing about fast cars and pretty women. It’s also the first time I took note of the band becoming an 80’s pop band, as Andy has been prone to describing them. The song is catchy as hell, but man, that one and then “The Devil” make for a really odd centerpiece in this album. Both are getting a fair number of spins, though.

For material that was written close to a decade ago, Confusion Bay holds up really well, and I can understand why a lot of Raunchy (still having something of a visceral reaction to the name – this will likely continue on until their 2010 release Discord Electric) fans swear by this one. It includes a lot of pounding, anthemic songs and the band seemed to be very inspired on this disc. As mentioned, a couple of oddball songs found their way into this release, but the band seem to be more consistent on Confusion Bay and it’s a really professional, well-done sounding album. I don’t want to presume, but the band really seem to have grown in the three years between the release of Velvet Noise and this one. Hard to believe that they had been going for a decade prior to this one getting out there.

Up next is Death Pop Romance, the first disc with Kasper Thomsen on it, and I have absolutely no idea what to expect. The fact that everyone claims Confusion Bay is their best has me a little worried, but then again, you probably never would’ve convinced me earlier on this year that I’d be two discs deep into this goofy project either.