(In this post TheMadIsraeli brings us the first of two reviews we’ll be publishing of the comeback album by Scotland’s Man Must Die, and at the end we’ll stream a new song from the album — “On the Verge of Collapse” — which debuted today.)

Man Must Die have been out of the game for a good bit.  The last we heard from these Scots was the precision-guided slaughterhouse known as No Tolerance for Imperfection, an album that demonstrated their melodeathgrind sound at its all-time high.  I honestly haven’t listened to this band in a really long while, you know how it is.  Some bands appear to drop off and you just don’t see the point in listening anymore.  I was, however, intrigued when we got the promo for this, especially because I wondered what five years between releases would do to their sound.  Thankfully Man Must Die didn’t let the passage of time change them, it merely make them better at what they do. In fact, they’ve crafted one of 2013’s undeniably best albums. 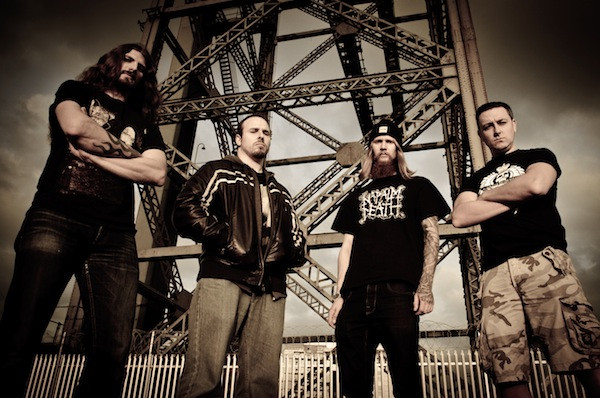 As a guitar player, the first thing that grabbed me was the excellence of every single second of the guitar work on this album.  Alan McFarland has always been a beast of an ax wielder, but here he owns his craft like a master owns a slave.  The riffs are intricate, but all are memorable, every single one.  His solo work is also astoundingly profound, conveying an emotional weight in his shred that really makes you feel the intensity of Man Must Die’s usually socially conscious lyrical bent.  However, oddly enough, as much as the man knows how to dish out the cathartic chaos, he’s at his best here when Man Must Die treads the line between melody and atonality, switching between both within the same song effortlessly (which also testifies to their songwriting ability).

Joe McGlynn’s vocals have always achieved an astounding symmetry with both McFarland’s tone and his riffs, and that synergy is in superb form here.  McGlynn is in peak condition, delivering a refined version of his Barney Greenway-esque roar that will curdle the blood in your veins when you turn up the volume.  The only moment of any kind of vocal reprieve comes during the two instrumentals, an intro and interlude, and the chorus in “The Hell I Fear”, which sees McGlynn employing a pitched roar, Gojira/Outcast style.  He’s quite the badass vocalist and overwhelming as a presence in Man Must Die’s sonic spectrum.

I mainly address McFarland and McGlynn because they really are what makes this band. However, it would be unfair to disregard the new-blood rhythm section of Daniel Firth, whose bass provides sledgehammer blows as an aid to McFarland’s shiv attacks in riff form, and drummer James Burke, who has the footwork of a cyborg and an intensely overwhelming style of drumming that’s absurdly busy, mechanically precise, and really sounds like the inner workings of a fortress-sized tank.  They add to Man Must Die’s pristine musical core, and are a definite part of the feeling this album generates of a rejuvenated band hungry for blood.

Peace Was Never An Option has it all: It’s brutal, it’s tempo dynamic, it’s technical, it’s got soul, it’s got intensity, it’s an example of everything metal should be.  This is what the upper crust, the higher echelon of metal supremacy, sounds like in 2013.

3 Responses to “MAN MUST DIE: “PEACE WAS NEVER AN OPTION” (AND THE PREMIERE OF A NEW SONG)”