Fans who have followed the musical career of Tuomas Saukkonen have realized by now that it doesn’t matter much which band name he chooses for his banner or which musicians join with him from project to project. Whether the name is Before the Dawn, Black Sun Aeon, or Dawn of Solace, the music has been recognizably and dependably his own.

In January of this year Saukkonen announced that he was shutting down all of those projects, as well as Routasielu and Final Harvest. In their place, he created Wolfheart, and with the exception of a wonderfully talented guest who contributes guitar solos, it is Saukkonen who has written and performed all the music on Wolfheart’s debut album Winterborn. It is, therefore, very close to a completely solo project, and the album is once again completely dependable. It contains not one weak song. In fact, all of them are magnificent.

Fans of Saukkonen’s most popular project, Before the Dawn, can rejoice, because much of what was familiar and welcome in that band’s music are still present in Wolfheart. The same can be said to the fans of Black Sun Aeon, because the signatures of that band’s songs are present here as well. Which is to say that Saukkonen hasn’t broken the mold and sat down at the pottery wheel to shape something radically new with his hands. He has instead taken the best elements from what he has done before and interwoven them in this new work, while also finding ways to stretch his talents in new directions. 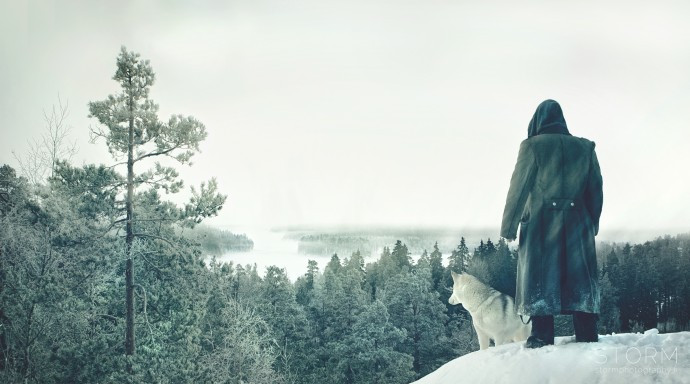 The nine songs on this 50-minute album are thematically linked, the lyrics full of imagery of ice and snow, deep woods and frozen lakes, wolves and warriors, darkness and frost. Where color emerges in this frigid northern setting, it comes in the form of blood red dawns, frozen blood on snow, and the blaze of funeral pyres. The words have a mythic quality, but the aura they create is bleak and ghostly, painting a landscape with words that chills right down to the marrow.

In keeping with the lyrical themes, the music captures the magnificent purity of loss and longing, struggle and sacrifice. It’s dramatic, sweeping, and intense. In fact, it wouldn’t be a stretch to say that every song is an anthem — but they are anthems stripped of cliche and artifice.

None of the songs falls completely off the precipice into the void of doom, but massive, distorted, low-tuned chords flow through every song in varying degrees, accompanied by Saukkonen’s distinctive, gargantuan roars. In some of the tracks, such as “Whiteout”, they trade places with high-energy, hard-charging sections of music. In others, such as the closing track “Breathe”, they are dominant, coming down like slow thunder.

Still other songs, such as “Strength and Valour”, borrow the galloping rhythms and galvanizing energy of Before the Dawn. Those songs are the kind of metal with which a warrior would ride proudly into battle. 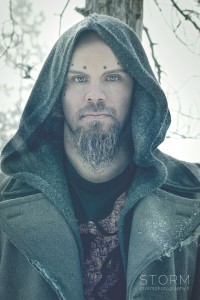 Saukkonen has always had a talent for writing memorable, often folk-influenced melodies, and Winterborn has them in spades. Sometimes languid, sometimes erupting with compelling urgency, they are woven into the fabric of the music, usually carried through the storm of low-end distortion by clean, reverberating lead guitar lines, sometimes by acoustic guitar, sometimes through the judicious use of keyboards.

Two other aspects of the songs must be mentioned. Many of them are marked by extended instrumental introductions (in the 2-3 minute range) that are completely riveting. “The Hunt” for example, which begins the album, leads off with an immediately infectious folk melody performed on acoustic guitar, followed without warning by the advent of huge, heavy chords and powerful drum beats and an electric guitar that picks up the acoustic melody. It’s one of the best introductions to any song I’ve heard all year.

“Routa Pt. 2” begins with a slow, mournful melody performed by violin and viola, followed by rapidly picked swarming riffs, followed again by dual acoustic guitar and keyboards. And the blasting drums and grinding distorted guitars that launch “Ghosts of Karelia” could easily be mistaken for the intro to a black metal assault. While the introductions fit with the balance of the songs they open, they also stand alone as striking pieces of music in their own right.

The second aspect of the music that cannot be overlooked are the guitar solos of Mika Lammassaari, who is also a member of Eternal Tears of Sorrow and Mors Subita. He contributes to five songs on the album, and in every case he hits a home run. His solos range from the slow and soulful to the completely incandescent. You’ll be hard-pressed to find better, more fluid, more consistently appropriate solos on any other album this year. (Word has it that he will be taking the stage with Saukkonen when Wolfheart begins playing live shows — that will be something to see.)

In the early days of this site, one of the people who collaborated with me to start it said that if I ever used the word “epic” again, she would stop talking to me. Since then, I’ve tried hard (but unsuccessfully) to avoid the word. But there really isn’t any other word that better sums up this album. Winterborn is an epic achievement, and one of the best albums of 2013. Tuomas Saukkonen is a prolific composer and performer who has already amassed an impressive archive of music, but from beginning to end the songs on Winterborn are among his best ever.

Winterborn is currently scheduled for release on October 11, 2013. It can be pre-ordered here. For more information, including announcements of live performances, visit Wolfheart on Facebook. Below you can check out the lyric video for the album’s opening song, “The Hunt”, and on September 23 watch for the official music video for “Routa Pt 2”.

UPDATE: Go HERE (or here) to stream the album in full.