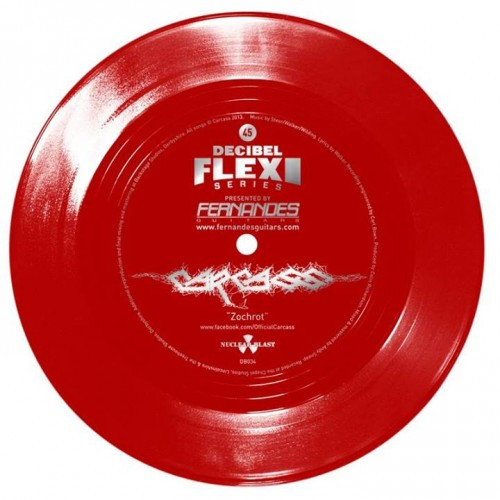 We’ve been way light on the content today. I don’t mean to imply any misgivings about Andy Synn’s Otargos review, but we’re way past mid-morning here on the West Coast of these United States, and on a typical day we would have three or four posts up on the site by now. However, I was out listening to live metal last night (a review is coming), didn’t get home and to bed until nearly 3 a.m., and am only now dragging myself into the world of the living (hail satan that I didn’t have to go to work at the usual hour this morning).

I do have a new post in the works, but it will take me a while longer to finish it. In the meantime, enjoy “Zochrot”. That’s not the name of a foot fungus. It’s the name of a “B-side” track recorded by Carcass that isn’t on their new album Surgical Steel but instead was included as part of DECIBEL magazine’s Flexi-Disc series. Subscribers to the magazine got a copy with the August issue. Everyone else is shit out of luck because, at least for now, it isn’t being released in any other format.

However, today DECIBEL did start making the song available for listening on Soundcloud. It’s got a bouncy groove (definitely not the deathgrind side of Carcass’ personality) and a couple of nice solos. Not a bad way to pass the time while I get my shit together. You can hear “Zochrot” by visiting this page (DECIBEL didn’t make the song embeddable):

See you a bit later today.