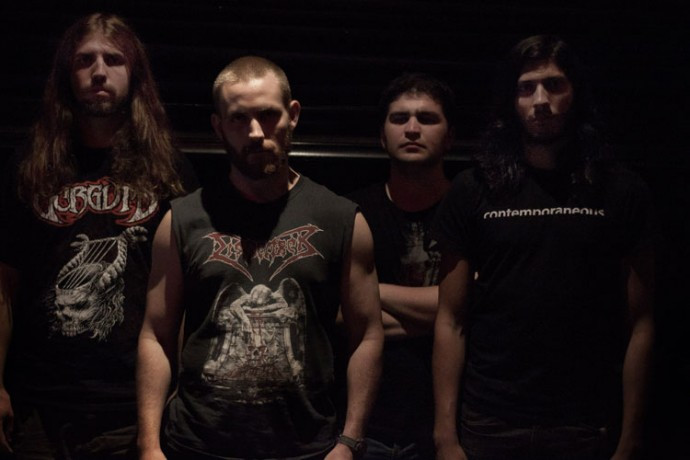 It’s not every day that we pause to take note of a band signing with a label, but we’re doing it now for reasons that will become evident. The band is New York’s Pyrrhon (pronounced “peer-on”, as the press release says), and the label is Relapse.

The new multi-album deal follows release of the band’s debut EP (Fever Kingdoms) on The Path Less Traveled record label in 2010, and by the 2011 release of their first album An Excellent Servant But A Terrible Master by Selfmadegod Records. A new album has been completed — tracked and mixed by Ryan Jones (Today is the Day, Mutilation Rites) and mastered by Colin Marston (Gorguts, Dysrhythmia, Krallice) — and it obviously got Relapse’s attention. Its name is The Mother of Virtues, and we’ll all get to hear it sometime in 2014.

September has been a good month for Doug Moore. He’s the vocalist and lyricist for Pyrrhon, but this month he also took over the reins as Editor of Invisible Oranges following Fred Pessaro’s departure for a position at Noisey. This elevation follows several years of writing for IO and other music sites. There may have been another serious metal blogger whose band has signed with a label the magnitude of Relapse, but if there is, I’m not aware of it. That’s a pretty good September two-fer.

Back in January of this year, NCS writer BadWolf (who is a friend of Moore and a fellow writer for both IO and Stereogum) interviewed him for our humble site. I re-read the interview today while basking in the reflected glow of these recent successes. The interview remains an interesting story of Doug Moore’s journey, particularly in light of what has happened eight months later. Here are a few portions of that dialogue that are especially poignant with the benefit of hindsight:

Oh, I wasn’t aware that you moved to NYC for the purposes of Pyrrhon! So you really believed in the project pretty hard pretty fast, I take it.

Yeah, I really felt like we had something. Not the soundest life decision, perhaps, but I wasn’t about to pass up a chance to do something I’d always dreamed of doing in favor of a head start on middle age.

And yet, as positive as the critical response to Pyrrhon has been, you haven’t had the easiest couple years in terms of gig opportunities and record distribution, etc. Or maybe you disagree?

Well, we got off to a slow start; it took us a few years to figure out what we wanted to do musically. We’re also young, weird guys who don’t have the same number of scene connections that older or more sociable bands do. And our music is challenging stuff. I wouldn’t expect a band like ours to blow up instantly.

2012 was actually a good year for us, gig-wise. We played with a lot of great bands—Tombs, Origin,Hate Eternal, Dysrhythmia, 16, Malignancy, Serpentine Path, Drugs of Faith, Cleric, etc. Various non-band scheduling obligations kept us from touring, but we’re starting to work around them. And while Selfmadegod is a small European label, they did a great job promoting and distributing our full-length from 2011. It’s easy to find in online distros. Many bands have had worse luck.

At the end of the day, though, we’re just not a band that’s geared to make a big splash quickly.The Melvins put out three albums on some label called Boner Records before Atlantic woke up to them. Witch Mountain formed in 1997 but didn’t garner national attention until last year. I have faith that our music will find its natural audience eventually.

It’s almost too easy of a question. I ask it because in my mind Pyrrhon sort of falls halfway into two artistic movements or marketing trends. Sort of three. You’re a Brooklyn-based metal band with an organic sound, so there’s that scene. At the same time, one could loosely call you a tech-death or prog-death band. At the same time your affinity for Deathspell Omega and Dodecahedron, you know, avant-black metal bleeds in as well.

Yeah, I don’t think we fit comfortably into any particular sound or scene. We aren’t looking to belong anywhere. It’s a good thing in one sense, but it probably doesn’t help us from a business perspective. We’d be more marketable if we were easier to summarize in a press release.

(I would note that the Relapse press release summarizes the new album as a “nightmarish blend of clanging death metal with surreal psychedelic elements, jazz rhythms, and delirious storytelling.” BadWolf took a stab at describing the music in the band’s previous releases in the preamble to his interview, writing that it “resides somewhere between Am-Rep style noise rock and progressive death metal of the most confrontational variety”.)

Let’s acknowledge the pink elephant, so to speak, you’re not just a musician you’re also a pretty prominent blogger. How do those two aspects of your life tie in?

I really try not to cross the streams any more than I have to. Writing about music and playing in a band express different parts of my personality. Analyzing music as a writer has influenced the way I think about writing music and vice versa, for obvious reasons, but each process is distinct in my head. I wish I’d taken on a pseudonym for one of the two, so that people didn’t associate writer-me with musician-me, but it’s too late for that now.

I’m sorry, is referring to this in the interview not kosher? Your call.

No, that’s fine. I get asked about it in every interview, haha. For good reason too. But hopefully that answer, if published, will deter some future people from asking me 9 questions about IO. I basically just don’t want it to become a distraction from the actual music.

I’m guessing Doug Moore will get asked this question a lot more in the coming weeks and months. But really, he’s right: For metal fans, all that will really count is the sound of Pyrrhon’s new album. And in that respect, let’s remind ourselves (as I’m sure Doug Moore would do himself) that Pyrrhon is not only Doug Moore but also Dylan DiLella (guitar), Erik Malave (bass), and Alex Cohen (drums).

We congratulate all of them, even if hailing the success of a fellow metal blogger may have been the primary impetus for this post. We’ll also be very curious to hear The Mother of Virtues when the time comes. You can hear the first two releases below.

One Response to “PYRRHON SIGNS WITH RELAPSE”