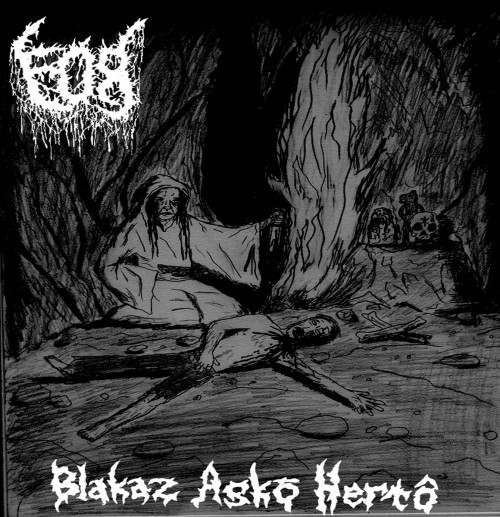 It would be very difficult to describe the attraction of FŌR’s new EP Blakaz Askǭ Hertô to anyone who is not already convinced about the power of blackened death metal and susceptible to the apocalyptic atmospherics that the style is capable of creating. It would be flat-out impossible to do that for anyone who is not already far along the left-hand path of extreme metal in general. Despite these challenges, I shall forge ahead.

Nothing played with a guitar and bass is truly devoid of melody — every string does represent a note. But FŌR have tuned the instruments so low, have so ramped up the distortion levels, and have made such abundant use of repeated tremolo-picked chords and feedback that what most people would call “melody” has been banished to some inaccessible netherworld. The songs are usually dominated by horrific grinding noise, occasionally segmented by massive hammering riffs that brutishly bludgeon like the ultimate hammer of doom.

The dense shroud of guitar and bass radioactivity is monolithic, impenetrable, suffocating, like a slow-moving mass of corrosive static. It’s a nearly relentless assault on the senses that reaches its apex in the 10-minute closing track “Lineage of the Amorphous”, in which one chord after another is struck in slow progression and the droning, fuzzed-out feedback just hangs there with the roentgen levels in the red zone until the the pick hand attacks again. 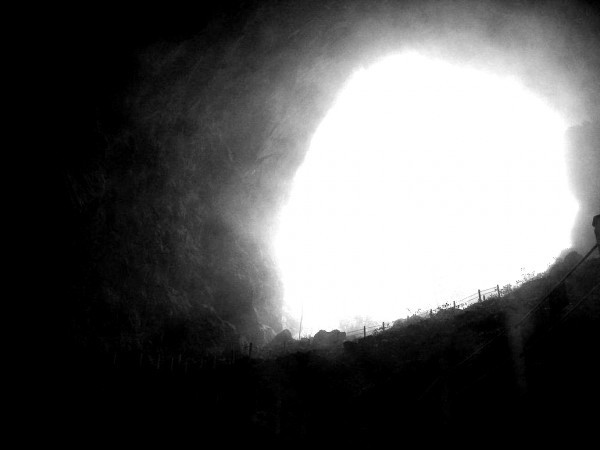 As if this strategy weren’t enough to sink the listener into an abyss inhabited by monsters, the vocals on the songs further embellish the hellish atmosphere. They’re utterly gruesome — cavernous and echoing and miles deep — except on rare occasions when they elevate into spine-tingling howls and shrieks.

Perhaps the most interesting twist on this doom-heavy variant of cataclysmic blackened death comes from the drumming. It lends the destructive music an almost experimental air. While the guitar and bass create hurricane-force winds of harrowing noise, the drum progressions move in unpredictable patterns and they often come and go in bursts, like intermittent artillery blasts. Sometimes the drum hits and cymbal ticks are slow and emphatic, like cannon shots, and sometimes they explode in a double-bass detonation or tumble like an avalanche. Given the absence of any verse-chorus-verse structure and the rarity with which even distinct riffs can be made out, the quirky percussion becomes a lead actor in this demented play.

In the end, I suppose you either get this or you don’t. I happen to think Blakaz Askǭ Hertô is very good, a well-crafted and authentically horrifying descent into the place where nightmares are born.

According to an interview of the band, FŌR is the Proto-Germanic word for “Fire”, and the name was chosen to “invoke the essence of Múspellsheimr and awaken the black flame within” — Múspellsheimr being the Old Norse word for one of the Nine Worlds and home to the fire jötunn. The band have further explained that the name of the EP — “Blakaz Askǭ Hertô” — is Proto-Germanic for “Black Ash Heart” and is intended to represent “the heart of Gullveig, the black witch, whom was burnt by the Æsir, and later reborn when Loke found her black rime heart laying in her ashes and ate it, giving birth to Jormungandr.”

Blakaz Askǭ Hertô was released digitally on September 28 by Iron Bonehead Productions and can be downloaded at Bandcamp via the link below. And yes, hail satan, Iron Bonehead now has a Bandcamp encampment! The label also plans to release a 12″ MLP on November 1.

Stream the EP following the links.