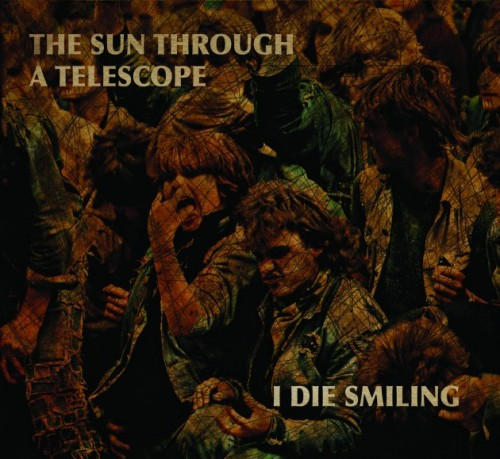 “Moody noise-rock cranked through a piss machine/ Beauty in soundscapes torn up by a synth ogre/ Toes dipped in a bowl of cold dog piss/ Clapping forever and no sound smiles/ Hooked on good music for miles and miles.” Three weeks ago I read that come-on for a forthcoming album by a one-man Canadian band named The Sun Through A Telescope. Didn’t know anything about them/him, but after seeing those words I had to find out. And that album, I Die Smiling, lit me up like a Roman candle. I hadn’t heard anything like it all year, or maybe ever.

I pleaded for a chance to premiere something — anything — from the album. This isn’t my usual behavior. We love to premiere music, but almost never ask for the opportunities (too afraid of rejection). Turns out those glory hogs at Invisible Oranges premiered the whole album. But I got my wish anyway, as you’re about to see.

What I got was the chance to premiere an official video for “You Can’t Kill Me”, the album’s opening track. Not just any old video, this one was made by David Hall of Maryland Deathfest the Movie fame, whose Handshake Inc. label is how I found out about I Die Smiling (get it here). It’s such a fitting marriage of imagery and music. Hall takes what appears to be a clip from a wholesome TV show and turns it into something strange and unsettling. The Sun Through A Telescope takes aspects of black metal, drone, post-metal, and sludge and turns them into something hypnotic and arresting.

Just be aware that no one song on the album represents the album as a whole. To quote from Doug Moore’s brief review at IO:

“The Sun Through A Telescope is the work of just one man — Lee Neutron of Ottawa, Ontario. Neutron is more than competent at all the standard rock instruments, and uses samplers and synths effectively to boot. He’s also something of a prodigy as a vocalist, with a broad range of both clean and harsh tones at his disposal. Neutron’s skills allow him to throw a huge diversity of moods at the listener: bright and stately on “You Can’t Kill Me” and “I Die Smiling”; clattering and violent on “Every Day Is Like Black Hole Svnday” and “The Bitten”; tranquil and almost completely still on “It, Still” and the sprawling centerpiece “Werewolf Weather.”

The diversity makes for a thrilling listen . . . .”

2 Responses to “AN NCS PREMIERE: WATCH THE SUN THROUGH A TELESCOPE (“YOU CAN’T KILL ME”)”