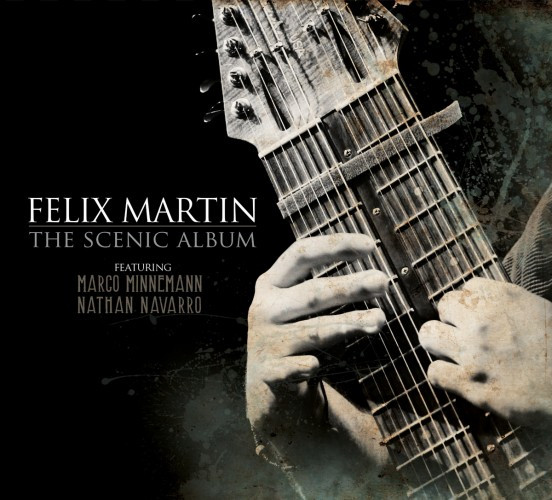 (Austin Weber returns to the site with a review of the new album by Felix Martin, released last month on the Prosthetic label.)

Among passionate music fans there is a real desire to hear the sonic unknown, to find until now unheard of amalgamations of styles and sounds. For me, Felix Martin encompasses that thrilling aspect of musical discovery, and in particular the mixing of a widening divergence of styles with metal. His forward-thinking approach to combining jazz and metal into legitimate jazz-metal impressed me from the first time I heard his 2010 debut, Bizarre Rejection, which I bought on Itunes but is no longer available there.

Since that time he was signed by Prosthetic Records and released a live album that contained four songs from his debut and a few new originals that showed even further depth in his crazy eight-finger tapping and the use of a unique 14-string guitar that allows him to play things no one else can. Now in 2013, a new Felix Martin release has dawned, this time entitled The Scenic Album.

The Scenic Album reveals continued evolution and growth in Felix Martin’s songwriting while also featuring three tracks from his previous live album. It starts out strong with the three-song “Tango” suite, which, as the title suggests, integrates Felix’s love for Latin rhythms and world music into his signature style of tapping. Where these songs diverge from those genres is in some oddly phrased metal riffs and Felix’s use of his instrument to create hybrid slap/pop-fueled rhythms and to intersperse soft yet powerful excursions into playful jazz. His sparingly used introduction of Meshuggah-inspired rhythms into his music also adds a new dimension not found on previous efforts.

After the strong three-song opener, the album moves on to “Spam II”, a delightful second chapter to what began with the first “Spam” way back on his debut album Bizarre Rejection. Like Part One, the song is a shifting blur of styles and emotions spliced up and regurgitated into one mass, much like the process used to create Spam by stripping and re-combining elements into an unholy singular whole. After the excellent “Spam II”, we get another exquisitely beautiful showcase of his tapping skills in the one-two punch of “Triangle Tune” and “High Spirit”. The rest of the album continues to expand and explore more diverse combinations of jazz and metal with a Latin flair, and never disappoints or bores.

The Scenic Album sees Felix Martin once again fuse jaw-dropping technicality with a fluid sense of grace and feeling. He has outclassed the majority of instrumental guitarists who are simply incapable of delivering this kind of multifaceted experience. There is a soulfulness to Felix Martin’s playing and a wise desire to frequently shift from the complex to the simple, and to do so in a meaningful way that never feels contrived.

Beyond his powerhouse playing, he has also wisely chosen two incredibly talented people to back him up on The Scenic Album, and their contributions take the album to even greater heights. Joining him is Nathan Navarro, a phenomenal bassist who furiously funks up this album and is audible at just about every point. His playing here, in tone and style, reminds me of Trevor Dunn, specifically on the first Mr. Bungle record, though occasionally the slap/popping you hear is Felix Martin (I noticed that when watching a playthrough of “Tango”, but that’s a rarity as far as I know.)

Rounding out the trio is the ever-eclectic Marco Minnemann, a drummer who is just as comfortable in a world music group or rock band as he is playing live for Necrophagist or doing studio work for Ephel Duath. While at times his playing feels more subdued as he follows Felix, he often branches out into a complicated flurry of beats delivered with a groovy precision most metal drummers simply don’t have.

With The Scenic Album, Felix Martin expands his own self-created hybrid of jazz-metal and does so in a way that is often stunningly beautiful. He expertly crafts complex yet catchy songs that resonate with a sincere emotional core that keeps your attention. With this release he has made clear his continued desired to blur and knock down sonic boundaries with ease, and he has a bright future ahead of him.