(TheMadIsraeli reviews the new album by Hail of Bullets.)

“In a man-to-man fight, the winner is he who has one more round in his magazine” – Erwin Rommel

Hail of Bullets really are the sonic incarnation of war at its most savage and horrifying. Their dedication to concept albums about real events, events that played out like a ballet of death, has proven effective, not only musically, but in their ability to capture the mood of the solider in the thick of war. No band has channeled the deadly precision, the zealous dedication to completing the objective and killing the enemy, or the rush of frantic horror in the last seconds of life, quite like Hail Of Bullets.

What accounts for this? Besides the lyrics, I don’t know if it’s the guitar tone, which sounds like the corpses of freshly dead soldiers being churned into putrid meat by tank treads, or van Drunen’s vocals, which sound less like an attempt to be brutal and more like an attempt to capture the sensation of a soldier frantically stabbing his enemy to death with a bayonet. …Of Frost and War summoned the bitter cold of winter warfare on the Eastern front, the imminence of death, and bitter defeat. On Divine Winds channeled the fanaticism, the fervor, and the imperialistic arrogance of Japanese forces in the second World War.

III: The Rommel Chronicles is more interesting, as its subject is someone who was a more ambiguous figure. I find it intriguing that they chose to make an album about Rommel, who was both a badass German tank commander and one of a group of conspirators who attempted to overthrow/assassinate Hitler himself. 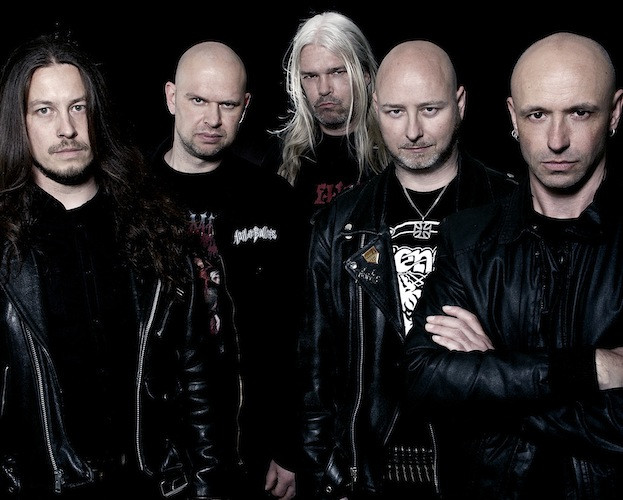 The German Africa campaign is also a part of WW2 that, much like the Pacific campaign, isn’t often the inspiration for metal albums. Considering the man at the center of the album’s focus, the music appropriately retains the typical Hail of Bullets bestiality, but also introduces a sense of contemplation, hesitation, and acceptance of an inevitable demise. As a result, the push-pull dynamic of the band’s old-school death and doom metal fusion may very well be at its best here.

The way in which the band use the music to convey the emotional power of its concept, along with channeling more than before the more human trauma of what it is to be caught up in war, really make this the band’s best record so far. While I don’t know all the lyrics, the music, instrumentally speaking, definitely conveys the sense of inner conflict that Rommel must have experienced. As the album unfolds, the changes in tempo, which often are pretty extreme, have an almost schizophrenic quality.

The album’s opening salvo of songs (which includes the singles that have been released so far) represents this aspect of the album pretty well. “Swoop of the Falcon” is a sonic battle tank. The churning intro, the riffs that sound like earth being smashed and crushed under the treads, and its energized yet sluggish pace set the mood perfectly, while second track, “Pour le Merite”, begins with quite a bit of speed, yet the majority of the song is a battle anthem, a dirge of blood, flying lead, and screams. “DG-7” starts out in the opposite direction, crawling out from beneath a pile of the corpses of its fellow soldiers, and then charging headlong into a raging torrent of gunfire and flame.

The rest of the album follows suit, offering up sludgy, gut-drenched, blunt-instrument beatdowns time after time. It’s really badass how the band meld together that previously mentioned push-pull dynamic of the scorching-fast death metal and the abysmally slothful doom, creating a sense of gained and lost momentum. You really feel the weight of an entire army being moved or halted in its advance.

More contrasts lie in wait. The intro of “Desert Fox”, which certainly feels like negative-BPM levels of trudge, paves the way for an ensuing deathrash assault. Other small moments are just overwhelming in their execution, such as “The Final Assault”, which on its second chorus drops the tempo to abysmal levels, only to rev back up to a pace that’s even faster than the tempo the song had in the first place. Those kinds of moments have always made this band fun to listen to. But the more one-note songs are enjoyable as well, such as the all-speed “Farewell to Africa” and the album’s closer, the thoroughly doom number “Death of a Field Marshall”.

Really, if you know who these guys are and have listened to them before, you know what’s in store: Meaty Entombed/Dismember/Asphyx/Death style riffing with soul-suffocating doom tempo drops, coupled with the vocals of Martin van Drunen, a unique voice with more ferocity than most young vocalists achieve in their prime. It doesn’t get much better than this. In fact, III: The Rommel Chronicles is a perfect album. It is brutality personified, but more than that, it’s brutality mixed with human emotion, tangibly capturing a frantic fanaticism to survive, to win, even on the brink of death and defeat. No one captures the horror of their subject matter better than Hail of Bullets, and it’s hard to imagine that anyone ever will.

III: The Rommel Chronicles was produced by Ed Warby and was mixed and mastered by Dan Swanö. It will be released on October 29 by Metal Blade Records and can be pre-ordered here. Listen below to the songs from the album that have been released to date.

5 Responses to “HAIL OF BULLETS: “III: THE ROMMEL CHRONICLES””