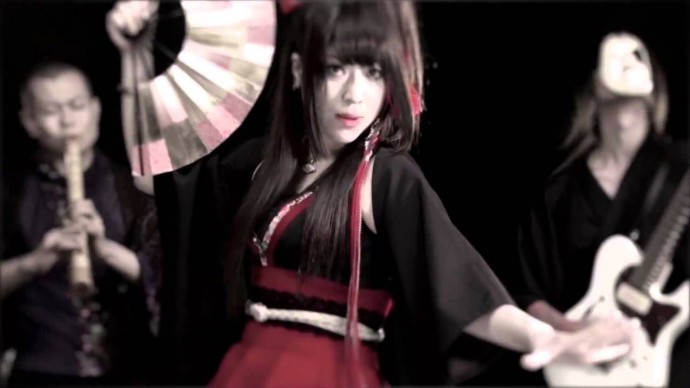 The Wagakki Band are unusual in at least two ways. First, they record covers of vocaloid songs. I didn’t know what vocaloids were, but The Font of All Human Knowledge explains that a vocaloid is software that enables users to synthesize singing by typing in the lyrics and information about the melody. I guess you could call it a digital vocalist. Apparently, vocaloid music has a big following in Japan, though it seems mostly unknown in the West. 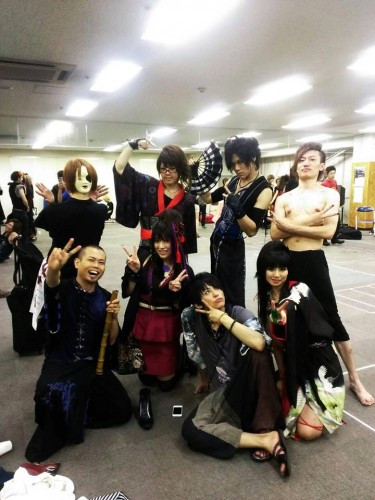 The second unusual aspect of The Wagakki Band’s music is their blending of traditional Japanese instruments and musical styles with Western hard rock. And so the band’s seven musicians (not counting fan-swinging vocalist Yuko Suzuhana) include not only a drummer, a guitarist, and a bassist but also a tsugaru-jamisen (Japanese lute) player, a koto (Japanese harp) player, a shakuhachi (Japanese flute) player, and a taiko drummer.

In his article, Phro collected the band’s three most popular videos, all of which are covers of vocaloid songs, as well as the original vocaloid tracks. His article includes a lot more information about the band, the videos, and the songs, and if you get into what you’re about to hear, you should read it — at this location.

I’m embedding the three Wagakki Band videos below, in a different order than Phro discussed them. I’m lining them up in order of my own preference, with the first one being my favorite — it’s the most hard-driving, hard-rocking song, and because it’s the most recent it also features the most elaborate production values.

I’ll be back to Seattle late tomorrow night, and after that life at NCS should return to something approaching normalcy.

9 Responses to “THE WAGAKKI BAND”