(In mid-September we posted the first of two reviews of the new album by Scotland’s Man Must Die, and now we bring you the second one, by Andy Synn.  Some albums just just demand this kind of attention.)

It’s been four years since these Scottish bruisers last brutalised our eardrums with their sickening sonic stew. Four long fucking years of pain and struggle and bloody-minded perseverance. So it’s no surprise that the fourth album by the Scottish juggernauts might just be their most abrasive, most lethally focussed, and most viscerally aggressive release yet.

To those unfamiliar with the band, their sound is a devastating mix of Cryptopsian chaos and Kataklysmic groove, delivered in a manner so utterly merciless, so utterly unforgiving, that its use in certain countries has been declared a war crime.

Fuelled by fire and frustration, each song is a demanding (at times exhausting) sequence of technical, pandemic death metal riffs, frenzied and punishing drums, and rabid, venomous vocals, all tied together by a subtle undercurrent of seditious melody and a grim atmosphere of malevolence and paranoia. 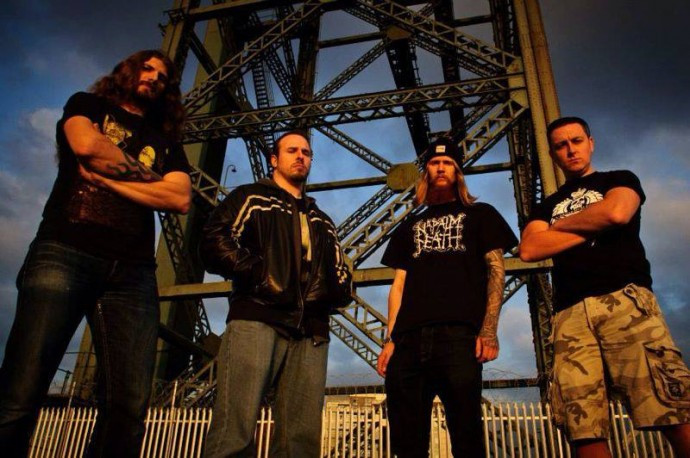 From the hellish opening of “Hiding In Plain Sight” – all scything tremolo work, blast-furnace drumming, and lethal hooks – until the last dying bars of “The Day I Died”, a mechanised death-march of creeping malevolence, Man Must Die’s fourth album pulls no punches and shows no mercy.

Throughout every track the vocal delivery is as rabid and vicious as they come, a bestial bark of pure purulent hatred, while the guitars blend razor-edged, knife-fight riffage, blistering napalm tremolo, and twisted lead refrains, all wrapped around a techno-mechanical spine of relentless, bludgeoning drum work.

Malicious and unforgiving throughout, Peace Was Never An Option mixes and matches nuanced, state-of-the art sonic havoc with stripped down, raw brutality. Songs like “Patriot” and “The Hell I Fear” have a Cryptopsy/All Shall Perish vibe to them, injected with a distinctive dose of pure, weaponised hatred – every swarming riff and proggy, dissonant lead part seething with barely contained violence.

But for all the unrepentant aural aggression on display here, the album is more than just a meathead assault of directionless brutality – there’s something far more predatory at work.

Beneath the razor-sharp riffs, caustic dissonance, and strangling tremolo runs of songs like “Sectarian” and the stupendously named “Absence Makes The Hate Grow Stronger” there’s an undercurrent of cold, clinical melody and sinuous, leviathan grace. This is a band who know how to bide their time, waiting for the perfect moment to unleash the killing blow, in order to achieve to achieve maximum musical murder. 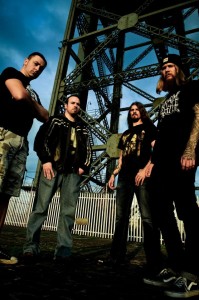 The time away from the spotlight seems to have invigorated the band with a renewed and refined sense of purpose. They’re not ashamed to incorporate some truly infectious hooks and killer refrains into the mix, because they know full well that nothing they do will weaken or lessen the primal impact of their music.

A song like “The Price You Pay” may be bursting at the seams with spiky, (dis)harmonic hooks (along with an incredibly catchy bass interlude), but none of this reduces the sheer, unforgiving force of the track. Instead it stands as testament to the cold and chilling intellect behind the music – one which knows that true strength is not just found in power, but in how that power is used. And Man Must Die use it incredibly well.

For an example of this look no further than “Antisocial Network” — which combines visceral sonic savagery with an underlying sense of malevolent groove — or the ballistic battering ram of “Abuser Friendly”, where high-speed detonations of maniacal drumming and slick stabbing riffs are accented by a glorious, spiralling solo, leading to a furiously frenzied conclusion. This is brutality, but not without purpose.

The album culminates with the lethal injection of “On The Verge of Collapse”, relentlessly jabbing at the listener with its nauseating, needling riffs and the choking darkness of “The Day I Died”, smothering any lingering sense of pity or mercy beneath a noxious layer of bleak, ugly menace.

This is an eye-opening, pulse-racing monster of an album, spitting venom and breathing napalm, coldly calculated in its intent and unforgivingly, unflinchingly brutal in its delivery.

Peace Was Never An Option is out s of today. It can be ordered from the band (here) or from Lifeforce Records (here), and it’s also available on iTunes. Below you’ll find the band’s Facebook link and some music.

10 Responses to “MAN MUST DIE: “PEACE WAS NEVER AN OPTION””